Clannad is a Japanese visual novel developed by Key and released on April 28, 2004 for Windows PCs. While both of Key's first two previous works, Kanon and Air, had been released first as adult games and then censored for the younger market, Clannad was released with a rating for all ages. It was later ported to the PlayStation 2, PlayStation Portable, Xbox 360, PlayStation 3, PlayStation Vita, PlayStation 4 and Nintendo Switch consoles. An English version for Windows was released on Steam by Sekai Project in 2015. The story follows the life of Tomoya Okazaki, an average high school student who meets many people in his last year at school, including five girls, and helps resolve their individual problems.

Hoshi (星) is a Japanese word which means star, and a surname. Hoshi is an unrelated word meaning "dried." Hoshi (保志) is a Japanese surname with a similar pronunciation. 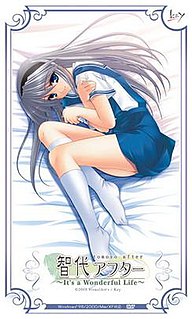 Tomoyo After: It's a Wonderful Life is a Japanese adult visual novel developed by Key released on November 25, 2005 for Windows PCs. The game is a spin-off of Key's earlier all ages game Clannad. Key later released versions of Tomoyo After without the erotic content, and the game was ported to the PlayStation 2, PlayStation Portable, Xbox 360 and PlayStation 3 under the title Tomoyo After: It's a Wonderful Life CS Edition; CS stands for "consumer software". The story follows the lives of Tomoya Okazaki, a young man who recently graduated from high school, and his close friend Tomoyo Sakagami as they start to see more of each other in a romantic relationship.

Star of the Giants is a Japanese sports manga written by Ikki Kajiwara and illustrated by Noboru Kawasaki. It was adapted as the first sports anime television series broadcast in Japan, in 1968. It later spawned two anime sequels and different anime movies. The anime was ranked #15 on TV Asahi's Top 100 Anime.

Clannad is a 2007 Japanese anime fantasy-drama film directed by Osamu Dezaki and based on the visual novel of the same name developed by Key. Toei Animation announced at the Tokyo Anime Fair on March 23, 2006 that an animated film would be produced, and was released in Japanese theaters on September 15, 2007. The film is a reinterpretation of the Clannad storyline which centers on the story arc of the female lead Nagisa Furukawa. It was the final film directed by Dezaki before his death in April 2011.

Tomoya Satozaki is former a Japanese professional baseball player. He played the entirety of his career with the Chiba Lotte Marines in Japan's Nippon Professional Baseball.

The Most Valuable Player (MVP) Award is an annual Nippon Professional Baseball (NPB) award given to two outstanding players, one each for the Central League (CL) and Pacific League (PL).

Tomoya Yagi is a Japanese professional baseball pitcher for the Chunichi Dragons in Japan's Nippon Professional Baseball. He won the Pacific League Rookie of the Year Award in 2006. 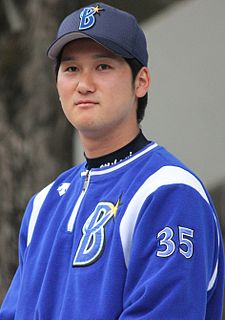 Tomoya Mikami is a professional Japanese baseball player. He plays pitcher for the Yokohama DeNA BayStars. 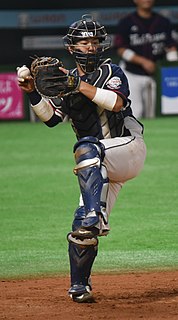 Tomoya Ichikawa is a professional Japanese baseball player. He plays catcher for the Fukuoka SoftBank Hawks.

Yūya Yanagi is a professional Japanese baseball player. He plays pitcher for the Chunichi Dragons.

Takanori Hoshi was a Japanese professional baseball catcher for the Yomiuri Giants and Saitama Seibu Lions of Nippon Professional Baseball. 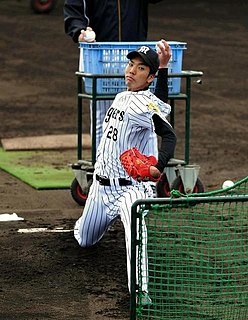 Taiki Ono is a Japanese professional baseball pitcher who currently plays for the Hanshin Tigers of Nippon Professional Baseball.