Tomoya Nagase (長瀬 智也, Nagase Tomoya, born November 7, 1978) is a Japanese former singer and actor. [1] [2] He was a member of Tokio, a Johnny & Associates musical group. He was the primary vocalist, in addition to playing the guitar alongside Tokio's leader, Shigeru Joshima.

He was inspired by bands Hikaru Genji and SMAP to answer a recruiting call of Johnny & Associates and was accepted. In 1992, he played several stage plays (Playzone and Mask) together with other Tokio members. He first played tambourine during Tokio's early performances as SMAP's background dancers. Just prior to Tokio's debut, the band's rhythm guitarist, Hiromu Kojima, left the band and was replaced by Tomoya Nagase.

In 1997, Nagase collaborated with American R&B group 3T to record the Japanese version of Eternal Flame, which was used as the theme song for the Japanese drama D×D, in which he starred. The single was released under the artist name "Tomoya with 3T" and reached number 12 on the Oricon charts. Nagase lists Guns N' Roses as his favorite band. [3] [4]

Nagase has had parts in over 40 dramas. His first lead role was in Hakusen Nagashi (1996). More lead roles followed including Ikebukuro West Gate Park , Mukodono! , and Tiger & Dragon . Mukodono! was his first comedic role. In My Boss My Hero he had another comedic role. He received an "Ishihara Yuijiro Award" in 2002 as "The Best Newcomer" for his role in the movie Seoul. He also currently playing as a lead actor in a drama Unubore Deka

Nagase has endorsed many various brands with the band Tokio and by himself. He is currently a brand ambassador for Fujicolor and Lotte Toppo. With Tokio, he has endorsed among others Microsoft's Xbox 360 and Eneos, a brand for Nippon Oil. As an actor, he has also endorsed UFO Nissin noodles, Lotte Coolish drinks, Subaru, Morinaga, Suntory Dry beer, Mazda, All Nippon Airways, NTT docomo, Hitachi Wooo, and Uniqlo. 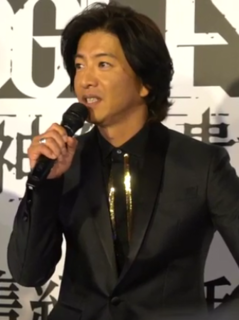 Kimura Takuya, also known as "Kimutaku" ("キムタク"), is a Japanese actor, singer, and radio personality. He is regarded as a Japanese icon after achieving success as an actor. He was also a popular member of SMAP, one of the best-selling boy bands in East Asia.

Tokio is a Japanese rock/pop band formed by Johnny & Associates that debuted in 1994. It is made up of four men who were signed with Sony Music Entertainment from 1994 to 2001, with Universal Music Japan from 2001 to 2008, and are now signed under J Storm, a label owned by Johnny & Associates. In addition to their activities as a band, the members of Tokio also act in dozens of dramas and host variety programmes, both as a group and individually. 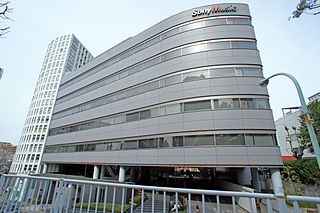 Johnny & Associates is a Japanese talent agency, formed by Johnny Kitagawa in 1962, which trains and promotes groups of male entertainers known as Johnny's.

Toma Ikuta is a Japanese actor. Ikuta is known for his roles in Hanazakari no Kimitachi e, Honey & Clover, Sensei!, Maou and Ouroboros. He also stars in feature films, notably Hanamizuki, Ningen Shikkaku and Brain Man.

TOK10 is a cover album by Japanese band Tokio, released on September 1, 2004. It was released to commemorate the tenth anniversary of the band's debut. The album peaked at first place on the Oricon weekly chart and charted for twelve weeks. Thus far, it is their only album to top the Oricon charts. 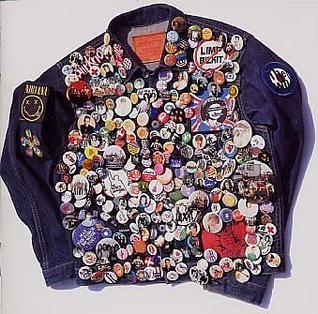 Best E.P Selection of Tokio is the first compilation album by Japanese band Tokio. It was released on March 26, 1997. The album reached fourth place on the Oricon weekly chart and charted for five weeks.

Blowing is the third studio album by Japanese band Tokio. It was released on March 25, 1996. The album reached seventh place on the Oricon weekly chart and charted for six weeks.

Bad Boys Bound is the second studio album by Japanese band Tokio. It was released on July 3, 1995. The album reached fourth place on the Oricon weekly chart and charted for four weeks. 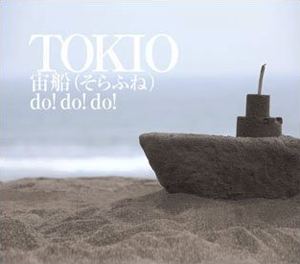 "Sorafune"/"Do! Do! Do!" is a double A-side single by the Japanese boy band Tokio, released on August 23, 2006. It is the thirty-sixth release for the group, and also has been their most commercial successful effort after their 1995 best-selling debut single "Love You Only".

"Seisyun" is the thirty-ninth single by the Japanese band Tokio, released on November 28, 2007. It topped the Oricon weekly charts and charted for twelve weeks. The song "Seisyun" was used as the theme song to Utahime, a drama show Tomoya Nagase starred in.

"Haruka" is the forty-third single by the Japanese band Tokio. It was released on February 3, 2010 under the label J Storm. The single topped the Oricon weekly singles chart. The songs "Haruka" and "Dash Village" are being used as theme songs for the Dash Beach and the Dash Village respectively, both segments on Tokio's long-running variety show, The Tetsuwan Dash. The Dash Village theme was originally composed by Tokio's lead singer Tomoya Nagase just shortly after the village itself was built in 2000. It has been used as the main theme since, though the version on this single is a re-recording.

Machiko Ono is a Japanese actress.

Tasuku Nagase is a Japanese actor from Tottori Prefecture.

"Amagasa" is a song by Japanese band Tokio. It was one of the two A-sides that composed the band's 39th single, along with the song "Akireru Kurai Bokura wa Negaō". The single was released on September 3, 2008, and was their first release with J Storm. "Amagasa" was written by Japanese rock musician Ringo Sheena. In 2014, Sheena covered the two songs she wrote for the single, "Amagasa" and "Kachū no Otoko", for her album Gyakuyunyū: Kōwankyoku. 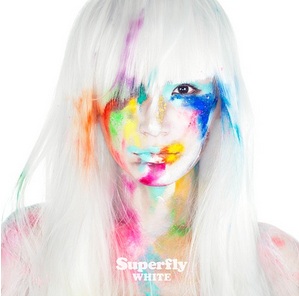 White is the fifth studio album by Japanese band Superfly. It was released on May 27, 2015.

Too Young to Die! Wakakushite Shinu is a 2016 Japanese horror comedy film directed by Kankurō Kudō. Tomoya Nagase played the lead role for the first time in 7 years. It was expected to be released on February 6, 2016, but was postponed because of a car accident scene that reminded people of a bus crash in Karuizawa. This film premiered at the 40th Hong Kong International Film Festival.

Fragile: Byōrii Kishi Keiichirō no Shoken is a Japanese manga series written by Bin Kusamizu and illustrated by Saburō Megumi. It has been serialized in Kodansha's Monthly Afternoon since June 2014. A 10-episode Japanese television drama was broadcast on Fuji Television from January to March 2016. In 2018, Fragile won the 42nd Kodansha Manga Award in the General category.