Born in Los Angeles, he accompanied his family back to Japan before he was three years old. He attended Waseda University and worked for a while as a journalist after graduating in 1988. He spent the better part of the years 1990-5 living in Mexico before returning to Japan, where for a time he worked translating from Spanish-language movies into Japanese. In 1997 he published his first novel The Last Gasp, for which he was awarded the Bungei Prize. He won the 13th Yukio Mishima Prize for his second novel The Mermaid Sings Wake Up, which was published in 2000. He won the Noma Literary New Face Prize for Fantasista in 2003. Other works include The Poisoned Singles Hot Springs (2002), Naburiai (2003), Lonely Hearts Killer (2004), Alkaloid Lovers (2005), The Worussian-Japanese Tragedy (2006), The Story of Rainbow and Chloe (2006), and the collection We the Children of Cats (2006). His short story "Sand Planet" was nominated for the Akutagawa Prize for 2002 *.

He has published many short stories and essays, both fiction and non-fiction. He also writes guest commentaries for newspapers and journals on sports (especially soccer), Latin America, politics, nationalism, and the arts. His short story "Chino" has been translated into English by Lucy Fraser, and is now part of his short story collection "We, the Children of Cats" (2012), published by PM Press and otherwise translated by Brian Bergstrom; his novel Lonely Hearts Killer has been translated into English by Adrienne Hurley and likewise published by PM Press. [1]

Hoshino travels frequently and has participated in writers' caravans with authors from Taiwan, India, and elsewhere. In 2006, his critique of Ichiro Suzuki's remarks at the World Baseball Classic were considered controversial by some, and so have some of his other writings related to Japanese nationalism, the emperor, sexuality, bullying, and Japanese society. Also in 2006, the literary journal Bungei dedicated a special issue to Hoshino and his work. He teaches creative writing at Waseda, his alma mater. In January 2007, he was nominated again for the Akutagawa Prize, this time for Shokubutsu shindanshitsu [Plant Medical Examination Room].*

In 2011, Hoshino won the Kenzaburō Ōe Prize for his novel Ore Ore (2010), which explores the meaning of identity in the postmodern world. [2] The title takes its name from the first-person Japanese pronoun ore (俺, 'I' or 'me'). Early in the novel, the narrator engages in a kind of scam known in Japan as a ore-ore sagi (俺俺詐欺, 'me-me scam'), in which he calls up an older person, pretends to be a relative, and tries to get the person on the other end of the phone line to send money. In the novel, the narrator finds himself unwittingly pulled into the life of the person whose identity he has fraudulently assumed, at the same time that someone else assumes his identity. This starts a chain-reaction of identity-stealing that extends to the edges of society, creating an increasingly surreal and dangerous world in which no one is exactly who they seem. The novel has been translated as ME by Charles De Wolf for Akashic Books.

In 2014 Hoshino won the Yomiuri Prize for Yoru wa owaranai(夜は終わらない, The Night Is Not Over), a novel based on One Thousand and One Nights that shifts narrative voice to misdirect the reader. [3] [4] In 2018 he won the Tanizaki Prize for Honō (焰). [5] 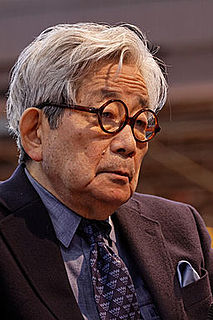 Kenzaburō Ōe is a Japanese writer and a major figure in contemporary Japanese literature. His novels, short stories and essays, strongly influenced by French and American literature and literary theory, deal with political, social and philosophical issues, including nuclear weapons, nuclear power, social non-conformism, and existentialism. Ōe was awarded the Nobel Prize in Literature in 1994 for creating "an imagined world, where life and myth condense to form a disconcerting picture of the human predicament today".

Hiromi Kawakami is a Japanese writer known for her off-beat fiction, poetry, and literary criticism. She has won numerous Japanese literary awards, including the Akutagawa Prize, the Tanizaki Prize, the Yomiuri Prize, and the Izumi Kyōka Prize for Literature. Her work has been adapted for film, and has been translated into more than 15 languages. 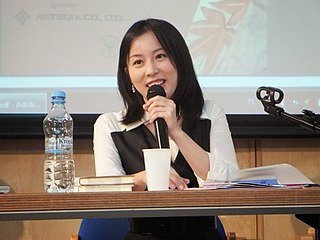 Risa Wataya is a female Japanese novelist from Kyoto. Her short novel Keritai senaka won the Akutagawa Prize and has sold more than a million copies. Wataya has also won the Bungei Prize and the Kenzaburo Oe Prize. Her work has been translated into German, Italian, French, Thai, Korean, and English.

Ian Hideo Levy is an American-born Japanese language author. Levy was born in California and educated in Taiwan, the US, and Japan. He is one of the first Americans to write modern literature in Japanese, and his work has won the Noma Literary New Face Prize and the Yomiuri Prize, among other literary prizes.

Akiyuki Nosaka was a Japanese novelist, singer, lyricist, and member of the House of Councillors. As a broadcasting writer he used the name Yukio Aki and his alias as a chanson singer was Claude Nosaka.

Junnosuke Yoshiyuki was a Japanese novelist and short-story writer.

Keizo Hino was a Japanese author.

Tsutomu Mizukami, also known as Minakami Tsutomu, was a popular and prolific Japanese author of novels, detective stories, biographies, and plays. He won the Tanizaki Prize and the Naoki Prize, and many of his stories were made into movies.

Yōko Ogawa is a Japanese writer.

The Kenzaburō Ōe Prize (大江健三郎賞) was a Japanese literary award sponsored by Kodansha (講談社) and established in 2006 to commemorate both the 100th anniversary of Kodansha's establishment and 50th anniversary of the writing life of Kenzaburō Ōe (大江健三郎). The award was for Japanese literary novels published in the previous year, with the winning work selected solely by Ōe. The winner received no cash award, but several winning works were translated into other languages, such as English, French and German, for publication. Kenzaburō Ōe had an open conversation with each winner. The final prize was awarded in 2014, and the collected selection commentary and dialogues were reprinted in a single volume published by Kodansha in 2018.

Hoshino is a Japanese name. It may refer to:

Yuya Sato is a Japanese novelist from Hokkaido Prefecture. He won the 21st Mephisto Prize for Flicker Style, and the 20th Yukio Mishima Prize for 1000 Novels and Backbeard. His works have been translated into English, Chinese and Korean.

The Mishima Yukio Prize is a Japanese literary award presented annually. It was established in 1988 in memory of author Yukio Mishima. The Mishima Yukio Prize is explicitly intended for work that "breaks new ground for the future of literature," and prize winners tend to be more controversial and experimental than winners of the more traditional Akutagawa Prize. It is awarded in the same annual ceremony as the Yamamoto Shūgorō Prize, which was established by the same sponsor in 1988 to recognize popular writing and genre fiction.

Tomoyuki is a masculine Japanese given name. Notable people with the name include: 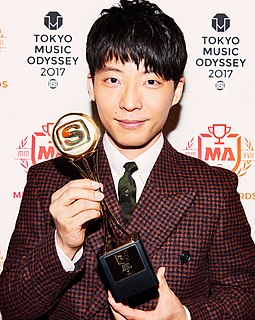 Gen Hoshino is a Japanese singer-songwriter, musician, actor, and writer.

Riku Onda is the professional name of Nanae Kumagai, a Japanese writer. Onda has won the Yoshikawa Eiji Prize for New Writers, the Japan Booksellers' Award, the Mystery Writers of Japan Award for Best Novel, the Yamamoto Shūgorō Prize, and the Naoki Prize. Her work has been adapted for film and television.

Nao-Cola Yamazaki is the professional name of Naoko Yamazaki, a Japanese writer. She has won the Bungei Prize and the Shimase Award for Love Stories, she has been nominated multiple times for the Akutagawa Prize, and her work has been adapted for film.