Last updated March 15, 2019
Not to be confused with Tomsk Railway.

The Tomsk–Tayga railway line is the railway branch connecting the Trans-Siberian Railway with Tomsk. [1] [2] 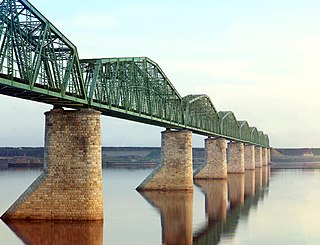 The Trans-Siberian Railway is a network of railways connecting Moscow with the Russian Far East. With a length of 9,289 kilometres, from Moscow to Vladivostok, it is the longest railway line in the world. There are connecting branch lines into Mongolia, China and North Korea. It has connected Moscow with Vladivostok since 1916, and is still being expanded.

The line is a single track throughout. Construction started in summer 1895 and completed in the end of 1896. Had at that time a length of 89 miles (95 kilometers). The need for the branches associated with the decision to build the Trans-Siberian Railway to bypass Tomsk, which was adopted in 1893.

The beginning of the branches was a 213-mile (227-th kilometer or about) the Medium-Siberian railway from nameless settlement of the Trans-Siberian Railway. Later the station became known as Tomsk–Tayga, and later Tayga. Now it is 3565-th kilometer of the Trans-Siberian Railway, on which is situated the town of Tayga, Kemerovo Oblast. The first 20 miles from the Tayga line runs along the watershed of the Katata/Cherbak (tributaries Yai) and Togakushi/Vasandani (tributaries Tom River), and then Vasandani and Ushaika Rivers. [3] Station "Tomsk" was located on the 82 mile (87 km), to him from Vela Irkutsk road. The endpoint of the branch was on the Bank of Tom river at the Marina, Ceremonii. 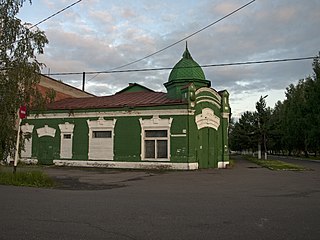 Kemerovo Oblast, also known as Kuzbass (Кузба́сс) after the Kuznetsk Basin, is a federal subject of Russia, located in southwestern Siberia, where the West Siberian Plain meets the South Siberian mountains. The oblast, which covers an area of 95,500 square kilometers (36,900 sq mi), shares a border with Tomsk Oblast in the north, Krasnoyarsk Krai and the Republic of Khakassia in the east, the Altai Republic in the south, and with Novosibirsk Oblast and Altai Krai in the west. Kemerovo is the administrative center of the oblast, though Novokuznetsk is the largest city in the oblast, in terms of size. Kemerovo Oblast is one of Russia's most urbanized regions, with over 70% of the population living in its nine principal cities. Its ethnic composition is predominantly Russian, but Ukrainians, Tatars, and Chuvash also live in the oblast. The population recorded during the 2010 Census was 2,763,135.

The Tom River is a river in Russia, a right tributary of the Ob River in Central Siberia. Its watershed lies within the Republic of Khakassia, Kemerovo Oblast, and Tomsk Oblast.

The need for the construction of the second track was first officially recognized in 1993 after the accident at the Siberian chemical combine. Then, the Russian Government has allocated 10 billion Rubles for the completion of the liquidation of the accident consequences. The Governor of Tomsk Oblast Victor Kress has disposed to spend the money including the construction of a second track between Tomsk-2 and Tayga (87 km). In 1994 has been allocated 200 million Rubles, which were intended Corporation "Transstroy". However, the second tracks were not laid anywhere. Only between stations Tomsk-2 and Tomsk-1 was made mound and delivered the pillars under the electrification of the second track. [4]

The Ob River, also Ob', is a major river in western Siberia, Russia, and is the world's seventh-longest river. It forms at the confluence of the Biya and Katun Rivers which have their origins in the Altay Mountains. It is the westernmost of the three great Siberian rivers that flow into the Arctic Ocean.

Tomsk Oblast is a federal subject of Russia. It lies in the southeastern West Siberian Plain, in the southwest of the Siberian Federal District. Its administrative center is the city of Tomsk. Population: 1 078 923 (1,047,394. 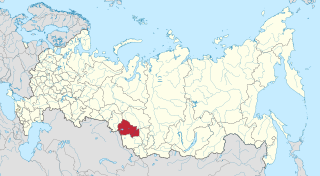 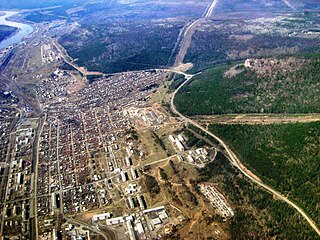 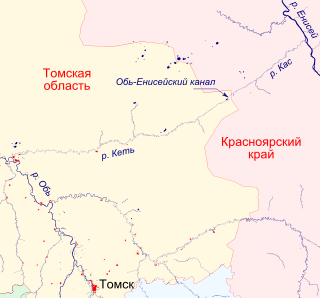 The Ob–Yenisei Canal, also known as the Ket-Kas Canal is a disused waterway that connected the basins of the rivers Ob and Yenisei in Siberia. 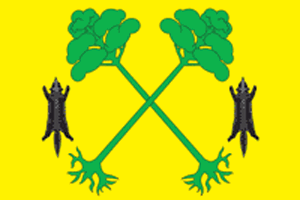 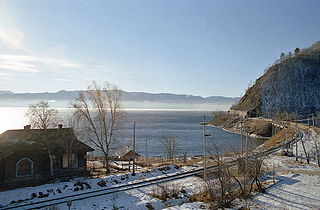 The Circum-Baikal Railway is a historical railway in the Irkutsk region of Russia. It runs along the Northern shore of the Southern extremity of the lake from the town of Slyudyanka to the Baikal settlement. Until the middle of the 20th century the Circum-Baikal railway was part of the main line of Trans-Siberian Railway; later on, however, a duplicate section of the railway was built. Sometimes called a unique achievement in engineering, the Circum-Baikal is one of the picturesque sights of the area around Lake Baikal.

Alexandrovsky District is an administrative and municipal district (raion), one of the sixteen in Tomsk Oblast, Russia. It is located in the northwest of the oblast and borders with the territory of Strezhevoy Town Under Oblast Jurisdiction, with Kargasoksky District, and with Khanty–Mansi Autonomous Okrug. The area of the district is 30,160 square kilometers (11,640 sq mi).} Its administrative center is the rural locality of Alexandrovskoye. Population: 8,686 ; 10,136 (2002 Census); 11,356 (1989 Census)—the second least populated in Tomsk Oblast. The population of Alexandrovskoye accounts for 83.0% of the district's total population.

Tomsk Railway was a rail operator in Siberia.

Tomsk-1 is the main railway station of Tomsk, Russia. It is located on the West Siberian Railway of Russian Railways.