Tomte Tummetott and the Fox

It is winter and the landscape is covered in snow. All animals are hungry, especially the fox. He wants to kill and eat the chicken in the stable. Meanwhile, Emma wants to put food outside for the dwarf Tomte Tummetott. Her older brothers laugh at her, because they think Tomte Tummetott doesn't exist. Her mother however says that, just because you can't see it, it doesn't mean it doesn't exist.

Meanwhile, the mice see that the fox is on his way to the chicken stable. They inform Tomte Tummetott, who tells them to let the dog know about this. Then Tomte feeds the other animals. He tells them that he saw many winters come and go and that they have to be patient as this winter will also give way to spring.

With the help from the dog, the cow and the mice Tomte can stop the fox from killing and eating the chicken.

Tomte gives the food that Emma has put outside for him to the fox. Emma watches the scene. She is so happy that she finally saw Tomte. However, when she calls her mother and brothers Tomte is gone. Only the fox is outside eating the food from Emma.

The film was produced by TRIKK17 in Hamburg, St. Pauli. The work on the 30 minutes film took over a year. In spring 2006 when Jan Weitendorf, from the Friedrich Oetinger company, went to Sweden, to talk with Astrid Lindgren's grandson Nils Nyman about the project. He told him that he wanted to make the film as a stop motion animation, Nils Nyman found that interesting and agreed to the making of the film.

The original poem about Tomte was made by Viktor Rydberg. Harald Wiberg later made some pictures of Tomte. Astrid Lindgren wrote the story much later, so that people all around the world can read the story. [1] The film was made by a total of 41,106 individual images. [2] In Germany next to the film also an audio play of the film has been released. [3]

The film was translated into English by David Henry Wilson. It was shown on several international film festivals. [4] The English version was also released on the German DVD. However, only the film was translated and dubbed into English, not the making off which was released on the same DVD. The DVD also features the Tomte Tummetott song in English, German and Swedish.

According to the Deutsche Film- und Medienbewertung (FBW) Tomte Tummetott and the Fox is a wonderfully filmed Christmas story. The characters are made very detailed. Everything fits in perfectly in this animated film. [7]

According to Kinofilmwelt.de children, as well as adults, are addressed by this family film which has an amazing Christmas atmosphere. [8]

Flimmo believes the film is characterized by its loving and charming realisation. Children in preschool will find it easy to follow the plot in the film, which also can be enjoyed by older children and adults. [9] 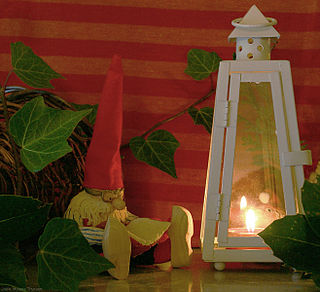 A nisse, tomte, tomtenisse, or tonttu is a mythological creature from Nordic folklore today typically associated with the winter solstice and the Christmas season. They are generally described as being short, having a long white beard, and wearing a conical or knit cap in gray, red or some other bright colour. They often have an appearance somewhat similar to that of a garden gnome.

KiKA is a German free-to-air television channel based in Erfurt, Germany. It is managed by a joint venture by public-service broadcasters ARD and ZDF. Its intended audience is children and the youth, and it is generally watched by children 3 to 14. 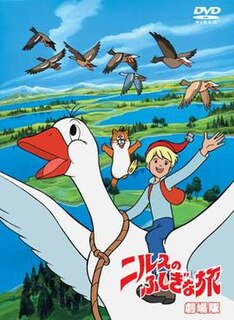 The Wonderful Adventures of Nils is an anime adaptation of the 1906 novel The Wonderful Adventures of Nils by the Swedish author Selma Lagerlöf. The 52 episode series ran on the Japanese network NHK from January 1980 to March 1981. The series was the first production by Pierrot. The anime was mostly true to the original, apart from the appearance of Nils' pet hamster, and the larger role given to Smirre the fox. The music was written by Czech composer Karel Svoboda; Yukihide Takekawa provided the soundtrack for its original Japanese broadcast and for some other countries.

Tomten, also known as "Midvinternattens köld är hård", is a poem written by Viktor Rydberg, and originally published in Ny Illustrerad Tidning in 1881. While outwardly being an idyllic Christmas poem, the poem asks about the meaning of life.

Lilibet, circus child is a book by the Swedish writer Astrid Lindgren, with photos by Anna Riwkin-Brick. In 1960 the book was published by Rabén & Sjögren.

Harald Wiberg is a Swedish author, artist and illustrator. He was best known for his illustrations in the books about Tomten and of Astrid Lindgren.

War Diaries, 1939–1945 is a book written by Astrid Lindgren. It contains the diary entries that Lindgren made during the Second World War. The book has been translated into many different languages including German and English.

Min ko vill ha roligt is a book written by Astrid Lindgren and Kristina Forslund. It contains all articles concerning animal protection and mass production that Lindgren and Forslund wrote in the Swedish magazines Expressen and Dagens Nyheter from 1985 to 1989. Their activities led to a new Swedish law which was later called Lex Lindgren and was announced at Lindgren's 80th birthday.