She was born in Istanbul, Turkey in 1939. And in 1959, she graduated from the American College for Girls. She continued her education in plastic arts at the Oklahoma State University with a B.F.A., and between 1962 until 1964 at the California College of the Arts (CCA). [1] She completed her M.A. in plastic arts in 1965 at the University of California, Berkeley. [1]

Her first solo exhibition was held in 1966, at the İstanbul Devlet Güzel Sanatlar Gallery. From then on she had numerous personal and collective exhibitions all over the world, including England, France, Egypt, Algeria and the US. Some of her works are included in the Elgiz Collection and displayed at the Proje4L / Elgiz Museum of Contemporary Art in Istanbul. [2] Apart from her work as an artist, she has written numerous essays on Museum Studies, and organized and held many conferences with notable figures.

She began to work at MSU Sculpture and Painting Museum (Resim Heykel muzesi) as Director Assistant in 1980.

She has also attended to artistic activities in Romania and Greece as a representative of Turkey and curated many exhibitions for the Turkish Ministry of Culture. [4]

She has written about the situation of Turkish women artists, her essay titled, "Contemporary Turkish Women Artists" was published in the e-journal, n.paradoxa in February 1997. [5]

Hito Steyerl is a German filmmaker, moving image artist, writer, and innovator of the essay documentary. Her principal topics of interest are media, technology, and the global circulation of images. Steyerl holds a PhD in Philosophy from the Academy of Fine Arts Vienna. She is currently a professor of New Media Art at the Berlin University of the Arts, where she co-founded the Research Center for Proxy Politics, together with Vera Tollmann and Boaz Levin. 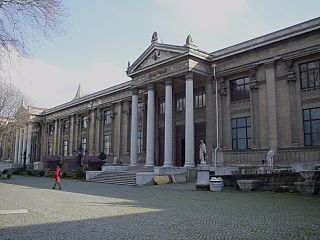 The Istanbul Biennial is a contemporary art exhibition that has held been every two years in Istanbul, Turkey, since 1987. The Biennial has been organised by the Istanbul Foundation for Culture and Arts (IKSV) since its inception. The Biennial aims to create a meeting point in Istanbul in the field of visual arts between artists from diverse cultures and the audience. The IKSV has enabled the formation of an international cultural network between local and international art circles, artists, curators and art critics by bringing together new trends in contemporary art every two years. 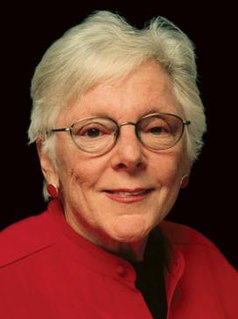 Linda Nochlin was an American art historian, Lila Acheson Wallace Professor Emerita of Modern Art at New York University Institute of Fine Arts, and writer. As a prominent feminist art historian, she became well known for her pioneering 1971 article "Why Have There Been No Great Women Artists?". 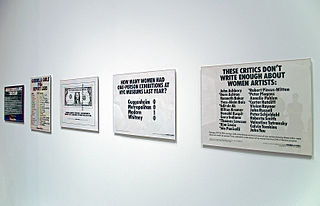 The feminist art movement in the United States began in the early 1970s and sought to promote the study, creation, understanding and promotion of women's art. First-generation feminist artists include Judy Chicago, Miriam Schapiro, Suzanne Lacy, Judith Bernstein, Sheila de Bretteville, Mary Beth Edelson, Carolee Schneeman, Rachel Rosenthal, and many other women. They were part of the Feminist art movement in the United States in the early 1970s to develop feminist writing and art. The movement spread quickly through museum protests in both New York and Los Angeles, via an early network called W.E.B. that disseminated news of feminist art activities from 1971 to 1973 in a nationally circulated newsletter, and at conferences such as the West Coast Women's Artists Conference held at California Institute of the Arts and the Conference on Women in the Visual Arts, at the Corcoran School of Art in Washington, D.C..

Elgiz Museum is a private collection museum, founded by Dr. Can Elgiz.

Junko Chodos is a contemporary artist born and educated in Japan and residing in the United States since 1968. Her works represent a wide variety of techniques and styles, ranging from pencil, pen, and collage, to works done with acrylic.

Sevil Soyer is a Turkish interdisciplinary artist. Soyer has had solo exhibitions and group exhibitions along with several installations in Turkey and the United States.

Şükran Moral is a Turkish artist, best known for her performances, videos and installations. During the 80's and 90's, she wrote poetry and worked as a journalist and art critic in Turkey. Moral currently lives and works in Istanbul and Rome.

Yeşim Ağaoğlu is a Turkish multidisciplinary artist and a poet who works with various mediums, especially concentrating on installation, photography and video. Her family comes from the city of Shusha in the Karabagh region of Azerbaijan. The most important thing for her in art is being interactive. She works on poetry (language) and art relationships, gender and feminism issues, architectural elements and political subjects. Since 1995 Agaoglu has produced nine poetry books that have made her famous as a women poet in the literature scene of Turkey.

Gizem Saka is a contemporary Turkish artist and an economist. She is a senior lecturer at the Wharton School of Business, University of Pennsylvania, and a visiting lecturer at Harvard University, teaching art markets.

Katy Deepwell is a feminist art critic and academic, based in London. She is the founder and editor of n.paradoxa: international feminist art journal, published since 1998 by KT press. She founded KT press as a feminist not-for-profit publishing company to publish the journal and books on feminist art.

Defne Ayas is a recognized curator, educator, and publisher working at the intersection of contemporary art, performance, and politics. Ayas is known for conceiving daring exhibition and biennale formats within diverse geographies, in each instance composing collaborative contexts and interdisciplinary frameworks that also provide historical anchoring and engagement with local conditions. Ayas has worked at and with many institutions across the world, including in the Netherlands, China, United States, Italy, and Russia. Currently, Ayas is the Artistic Director of 2020 Gwangju Biennale, together with Natasha Ginwala. She also serves as a curator at large at V-A-C Foundation in Moscow. She was the director of the Witte de With Center for Contemporary Art in Rotterdam (2012-2017). Towards the end of her tenure in 2017, she announced that the institution had to change its name to dissociate itself from its namesake, the Dutch naval officer Witte Corneliszoon de With. The institution’s decision to change its name was immediately politicized, causing a flurry of controversy in the Netherlands. The decision for a name change was triggered by an Open Letter to Witte de With published on 14 June 2017 by Egbert Alejandro Martina, Ramona Sno, Hodan Warsame, Patricia Schor, Amal Alhaag, and Maria Guggenbichler, and the debates that followed.

Gisela Weimann is a German multimedia artist who lives and works in Berlin. Her working techniques range from painting, printmaking, photography and film to performance art and art in public space. Her work often focuses on political - particularly feminist - themes, and on art's relationship with political and social issues.

Nur Koçak is a contemporary feminist Turkish artist who was born in Istanbul, Turkey in 1941. She is a pioneering representative of hyperrealism in Turkey since the 1970s. She is most well known for her works that comment on women's objectification in consumerist societies. She lives and works in Istanbul, Turkey.

Nancy Atakan was born in Virginia, US. She is a visual artist living and working in Istanbul since 1969. Her works deal with issues of feminism, gender, identity and memory. Also a critic and art historian, she has completed her PhD on conceptual art in Turkey. She is a co-founder of the artist-run-space 5533, operating since 2008 in Istanbul Traders' Market Shopping Center.

Ipek Duben is a contemporary visual artist based in Istanbul. She produces artist books, poetry, installations, video, painting and sculpture. Her work deals with identity issues, feminism, and migration with a strong emphasis on social and political criticism. Besides actively producing and exhibiting art, Duben also acts as an art critic with numerous published essays and books on art and criticism. In recent years her work has been shown in international institutions including Belvedere Museum, Vienna (2016), SALT Galata, Istanbul (2015), British Museum, London (2014), 13th Istanbul Biennial (2013) and Akademie der Künst, Berlin (2009). In 2015, SALT published a collection of her essays on art and criticism written between 1978 and 2010.

Anne Wölk is a contemporary German painter who currently lives and works in Berlin, Germany. Wölk is best known for her paintings of romantic starscapes and a recycling of popular culture, science fiction imagery hinting at ideas of a cosmic “life beyond Earth”. Romanticism and utopia are key themes to her work and she is considered to be a part of the contemporary conceptual and figurative artists in Berlin.