Tomy Drissi ( /ˈdriːziː/ DREE-see; born December 9, 1958) is an American professional stock and sports car racing driver, and an advertising executive in the movie industry. A long-time competitor in the Sports Car Club of America's Trans-Am Series, he was the series' 2009 Champion.

Drissi first became involved in motorsports through his participation in illegal street racing, primarily on Mulholland Drive in Hollywood's Hollywood Hills, starting at the age of 16. [1] [2] He began legitimate competition in 1993, when he became involved in vintage racing, primarily at Willow Springs Raceway. [2] Drissi's driving style proved "too aggressive" for the fragile vintage cars, [2] and he moved to standard, modern race cars, making his debut in professional racing in 1999. Competing in the SCCA Trans-Am Series, Drissi won Rookie of the Year in his initial season. [1] [2] He would score his first win in the series the following year at the Long Beach Grand Prix. [2] Competing in the series both before and after its mid-2000s hiatus, he won the first championship of the revitalized series in 2009. [1]

Drissi also competed in the SCCA World Challenge series between 2006 and 2010; in 2003, he had begun competing in the sports cars of the American Le Mans Series, [2] where he would make his primary effort in racing outside of Trans-Am; he currently drives in the series for RSR Racing, competing in the Prototype Challenge class, co-driving an Oreca FLM09 with Bruno Junqueira and Roberto González. [3] As of 2012 [update] , he has scored two class wins during his career in the series, [3] both coming during the 2011 season at the Mid-Ohio Sports Car Course and at the Baltimore Grand Prix. [4] [5]

Drissi also competed in nine Rolex Sports Car Series events in 2005 and 2006, posting a best finish of ninth on the road course at Phoenix International Raceway in September 2005. [6]

In 2010, Drissi made his debut in stock car competition, driving the No. 82 Dodge Charger for MacDonald Motorsports in the NASCAR Nationwide Series, competing in the NAPA Auto Parts 200 at Circuit Gilles Villeneuve in Montreal. [7] He finished 18th in the event; the following year he would drive in two races in the Nationwide Series, driving the No. 75 Ford for Rick Ware Racing at Watkins Glen International, where he finished 27th, and at Montreal, finishing 34th. [8] Drissi also competed in a single NASCAR K&N Pro Series West race in 2011 on the road course at Portland International Raceway, driving the No. 12 Toyota for Bill McAnally Racing; [9] he would finish 22nd in the event. [10]

Drissi drove the No. 26 car for Rick Ware Racing in the 2015 NASCAR Xfinity Series road course races at Road America, Watkins Glen, and Mid Ohio Sports Car Course with a best finish of 25th place. In 2016, Drissi joined TriStar Motorsports' #14 Arthritis Foundation Toyota, for the road races. On lap 17 of the Zippo 200 at the Glen, Drissi was injured during a 5-car pileup in the esses. It forced him to withdraw from the rest of the race as well as the following week's race at Mid-Ohio. Drissi recovered from the injury and returned to the #14 team weeks later at Road America where he finished 26th.

In 2011, established as a "road course ringer", [11] Drissi was hired by Max Q Motorsports, which had entered into a partnership with Rick Ware Racing, [12] to drive the team's No. 37 Ford, sponsored by the movie Rise of the Planet of the Apes , in the NASCAR Sprint Cup Series at the Toyota/Save Mart 350 at Infineon Raceway. [13] Drissi was not approved by NASCAR to compete in the event due to not having sufficient experience in the heavy Sprint Cup cars; Chris Cook substituted for Drissi, qualifying and driving the car in the event. [14] [15]

Drissi returned to Infineon (now known as Sonoma) for the 2012 Toyota/Save Mart 350, being hired to drive the No. 10 Chevrolet, sponsored by Ice Age: Continental Drift , for Tommy Baldwin Racing. [8] [16] Drissi returned to Sonoma in the 2013 Toyota/Save Mart 350 for NEMCO-Jay Robinson Racing, driving the No. 87 Toyota sponsored by The Wolverine , [17] and drove again for the team at Watkins Glen International with sponsorship promoting The Counselor . [18] A year later, he joined Identity Ventures Racing in the No. 66 Toyota with sponsorship from Hercules at Sonoma. [19] He started last and finished 38th. [20]

During the race at Mid-Ohio on August 15, 2015 he started from pole position in a Tony Ave Racing machine, but lost a couple of places after battling with championship contender Amy Ruman coming out of "The Keyhole". Drissi drove aggressively towards the front, spinning out his teammate Paul Fix and was parked for 1 lap as punishment.

When the caution came out he passed some cars – which he got penalized for later on in the race – and drove next to Ruman and showed his unhappiness with her by touching her car a few times lightly. After serving his drive-through penalty for avoidable contact, Drissi waited for Ruman, who was leading the race at the moment, to drive just behind him and then he tried to block her from putting him a lap down. Coming out of "The Keyhole" Ruman made the pass and Drissi purposely crashed into her and both cars went back across the track taking out himself, Ruman and Doug Peterson, one of Drissi's teammates, who was running second at the time, causing the maximum suspension allowed by SCCA for Drissi, which is one full calendar year. Not only was he suspended for one full year, he was also disqualified from the race and therefore lost his points and prize money. Drissi appealed the penalty but the appeal was denied due to a baseless setting and the penalty was upheld.

Ruman said during a post-race interview, which aired on CBS Sports Network: "Tomy Drissi is the most unprofessional, unsportsmanlike, unimaginable, worst driver in what he calls a professional sport. What he did was unacceptable today, he trashed my car, he blocked us, we were winning the championship, this is the third year in a row he's hit me, he has a vendetta against me. He's unprofessional and it's unacceptable what happened here today." [22]

Drissi returned to Trans Am for the 2017 season, but was subsequently suspended after being involved in a physical altercation at Indianapolis Motor Speedway on June 17, 2017. [23] On August 7, 2017, Drissi was reinstated and placed on probation after agreeing to fulfill undisclosed terms and conditions by Trans Am. [24]

Drissi is the owner of a Hollywood advertising agency that produces film displays for promoting upcoming films in cinemas. [2] He is married to Lacy Livingston Drissi and they have two children. [1] 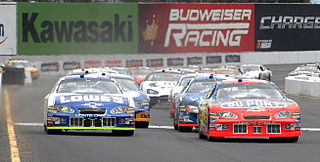 Sonoma Raceway is a road course and dragstrip located at Sears Point in the southern Sonoma Mountains of Sonoma, California, United States. The road course features 12 turns on a hilly course with 160 feet (49 m) of total elevation change. It is host to one of only three NASCAR Cup Series races each year that are run on road courses. It has also played host to the IndyCar Series, the NHRA Mello Yello Drag Racing Series, and several other auto races and motorcycle races such as the American Federation of Motorcyclists series. Sonoma Raceway continues to host amateur, or club racing events with some open to the public. The largest such car club is the Sports Car Club of America. The track is 30 miles north of San Francisco and Oakland. 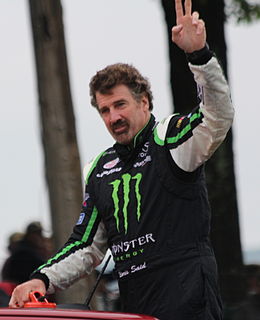 Boris Said III is an American professional race car driver. His father, Bob Said, was a Formula 1 race driver and US Olympic bobsled driver in 1968 and 1972. His NASCAR career began in 1995 as a "road course ringer" primarily due to his extensive road-racing experience. He last competed part-time in the Monster Energy NASCAR Cup Series, driving the No. 33 Chevrolet SS for Circle Sport – The Motorsports Group. 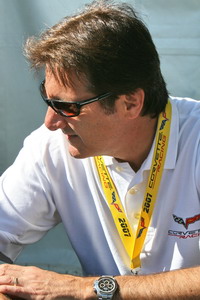 Ronald Charles Fellows CM is an accomplished Canadian SCCA Trans-Am, IMSA, and American Le Mans Series driver. Fellows holds the record for most wins by a foreign-born driver in NASCAR's top three series with six – four in Nationwide and two in Trucks. He also is a Member of the Order of Canada.

Wally Dallenbach Jr. is an American racing driver who formerly competed in the NASCAR Winston Cup Series. He competed in 226 Winston Cup races from 1991 to 2001 and had 23 top 10 finishes. The son of open wheel racer and former CART chief steward Wally Dallenbach Sr., Wally Jr. is also a road racer. Aside from NASCAR, Dallenbach has raced in SCCA Trans-Am, IMSA Camel GT, CART, and the Pikes Peak International Hill Climb. 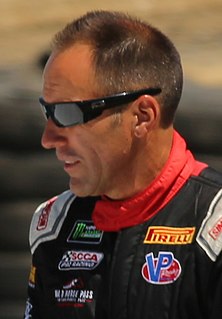 Chris Cook is an American professional race car driver and driving instructor, who instructs at the Bob Bondurant School of High Performance Driving and competes irregularly in the Monster Energy NASCAR Cup Series and other racing series, specializing in road course racing.

Justin Marks is an American entrepreneur and former professional racing driver. He last competed in the WeatherTech SportsCar Championship, driving the No. 93 for Meyer Shank Racing with Curb-Agajanian in the GT Daytona class. He owns the NASCAR Cup Series team Trackhouse Racing Team. 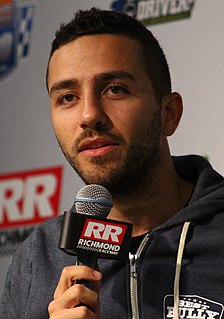 Alon Day is an Israeli professional stock car racing driver. He currently competes in the NASCAR Whelen Euro Series, driving the No. 24 Chevrolet SS for PK Carsport and is a two-time champion in the series. Day is the first Israeli driver to compete in an IndyCar-sanctioned series and is also the first Israeli to compete in one of NASCAR's top three touring series.

Victor Gonzalez Jr. is a Puerto Rican professional stock car racing driver. He last competed part-time in the NASCAR Xfinity Series, driving the No. 17 Chevrolet Camaro for Niece Motorsports. Twice a competitor in the 24 Hours of Daytona endurance race, he became the first Puerto Rican driver to compete in a top level NASCAR series when he broke the barrier in 2009.

The 2012 Toyota/Save Mart 350 was a NASCAR Sprint Cup Series stock car race held on June 24, 2012, at Sonoma Raceway in Sonoma, California. Contested over 110 laps, it was the sixteenth race of the 2012 NASCAR Sprint Cup Series season and the first of two road course competitions on the schedule. Clint Bowyer of Michael Waltrip Racing took his first win of the season, while Tony Stewart finished second and Kurt Busch finished third.

The 2013 Toyota/Save Mart 350 was a NASCAR Sprint Cup Series stock car race held on June 23, 2013, at Sonoma Raceway in Sonoma, California, United States. Contested over 110 laps on the 1.99-mile (3.2 km) road course, it was the sixteenth race of the 2013 Sprint Cup Series championship, and the first of two road course competitions on the schedule. Martin Truex, Jr. of Michael Waltrip Racing won the race, breaking a 218-race winless streak stretching back to June 2007, while Jeff Gordon finished second. Carl Edwards, Kurt Busch, and Clint Bowyer rounded out the top five. The top rookie of the race was Ricky Stenhouse Jr who finished 27th.

JGL Racing was an American professional stock car racing team that last competed in the NASCAR Xfinity Series. The team was based in Denver, North Carolina. The team recently fielded the No. 24 for Kaz Grala and No. 28 for Dylan Lupton and Tony Mrakovich. 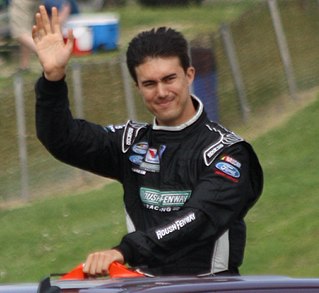 Jay Robinson is an American auto racing executive who is a part-owner of Premium Motorsports. Prior to this, Robinson earned his wealth in the wholesale grocery business.