"The ton" was Britain's high society during the late Regency and the reign of George IV, and later. The word means, in this context, "manners" or "style" and is pronounced as in French ( [tɔ̃] ). The full phrase is le bon ton meaning etiquette, "good manners" or "good form" – characteristics held as ideal by the British beau monde.

"The ton" has also been used to refer to the Upper Ten Thousand of later 19th-century New York society as well as most of the peerage, landed gentry, and wealthy merchants or bankers of the City of London.

Ton society was intensely class-conscious and the social hierarchy was rigid.

Members of the ton came from the aristocracy, gentry, royalty and monarchs. Though some wealthier members of the middle classes could marry into the lower ranks of the gentry, such unions were not completely accepted by the elite ton. Social positions could be altered or determined by income, houses, speech, manner of dress, or even etiquette. Climbing the social ladder could take generations, particularly into the aristocracy, which did not readily accept those perceived to be of inferior birth.

Fashion, etiquette, manners, social customs, and many other aspects of social life were all dictated by the ton. The ton's generally acknowledged leaders were the Lady Patronesses of Almack's. As London's most exclusive mixed-sex social club, Almack's represented the best and wealthiest among the ton. The conventions of ton life were highly structured and complex. Social acceptance was crucial and mostly based on birth and family. Acceptable social behaviours differed for men and women; they were based on a system validated primarily by the patronesses of Almack's, who determined who could be admitted to its functions. Some of these behaviours were flexible – they adapted slightly with the fashions of each season – but they always reflected the current modes of manners, fashion, and propriety.

The privileged members of the ton could pursue an extravagant life of indulgence, but there were often double standards for its members. The flexibility of social rules was unofficially determined by an individual's status, wealth, or family connections. Royalty were forgiven almost any transgression. Scandalous activity such as having illegitimate children or conducting extramarital affairs might incite gossip, but were often overlooked for members of the aristocracy, while such conduct among the gentry could destroy an entire family's social aspirations.

The Season was the name given to the months between late January and early July. It officially began when Parliament reopened in London and was the season for social entertainments – balls, theatre parties, dances, masquerades, military reviews, and other social pleasures enjoyed by the ton. Families with marriageable children used the Season to present their children to the ton in hopes of arranging profitable marriages. For this reason, the Season has also been called the "Marriage Mart" by notables such as Lord Byron. For marriageable girls, the Season was an intense period of social networking in which a faux pas could affect their marriage and social prospects within the ton. 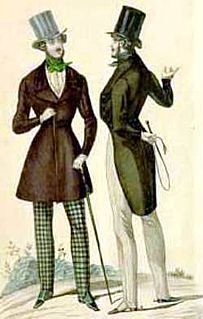 A dandy, historically, is a man who places particular importance upon physical appearance, refined language, and leisurely hobbies, pursued with the appearance of nonchalance in a cult of self. A dandy could be a self-made man who strove to imitate an aristocratic lifestyle despite coming from a middle-class background, especially in late 18th- and early 19th-century Britain.

Etiquette is the set of conventional rules of personal behaviour in polite society, usually in the form of an ethical code that delineates the expected and accepted social behaviours that accord with the conventions and norms observed by a society, a social class, or a social group. In modern English usage, the French word étiquette (ticket) dates from the year 1750.

George Bryan "Beau" Brummell was an iconic figure in Regency England and for many years the arbiter of men's fashion. At one time he was a close friend of the Prince Regent, the future King George IV, but after the two quarrelled, and Brummell got into debt, he had to take refuge in France. Eventually he died shabby and insane in Caen.

Fop became a pejorative term for a foolish man excessively concerned with his appearance and clothes in 17th century England. Some of the many similar alternative terms are: coxcomb, fribble, popinjay or dandy, fashion-monger, and ninny. Macaroni was another term of the 18th century more specifically concerned with fashion.

Catherine Grace Frances Gore, a prolific English novelist and dramatist, was the daughter of a wine merchant from Retford, Nottinghamshire. She became among the best known of the silver fork writers, who depicted gentility and etiquette in the high society of the Regency period.

A socialite is a person who plays a prominent role in or is very frequently involved in high society. A socialite generally spends a significant amount of time attending various fashionable social gatherings. 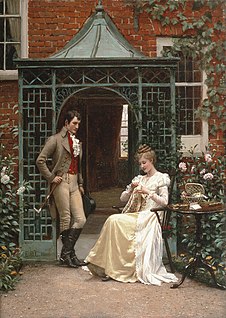 Regency romances are a subgenre of romance novels set during the period of the British Regency (1811–1820) or early 19th century. Rather than simply being versions of contemporary romance stories transported to a historical setting, Regency romances are a distinct genre with their own plot and stylistic conventions. These derive not so much from the 19th-century contemporary works of Jane Austen, but rather from Georgette Heyer, who wrote over two dozen novels set in the Regency starting in 1935 until her death in 1974, and from the fiction genre known as the novel of manners. In particular, the more traditional Regencies feature a great deal of intelligent, fast-paced dialogue between the protagonists and very little explicit sex or discussion of sex.

A macaroni in mid-18th-century England was a fashionable fellow who dressed and even spoke in an outlandishly affected and epicene manner. The term pejoratively referred to a man who "exceeded the ordinary bounds of fashion" in terms of clothes, fastidious eating, and gambling. He mixed Continental affectations with his English nature, like a practitioner of macaronic verse, laying himself open to satire:

There is indeed a kind of animal, neither male nor female, a thing of the neuter gender, lately [1770] started up among us. It is called a macaroni. It talks without meaning, it smiles without pleasantry, it eats without appetite, it rides without exercise, it wenches without passion.

Demi-monde is French for "half-world". The term derives from a play called Le Demi-Monde, by Alexandre Dumas fils, published in 1855. The play dealt with the way that prostitution at that time threatened the institution of marriage. The demi-monde was the world occupied by elite men and the women who entertained them and whom they kept, the pleasure-loving and dangerous world Dumas immortalized in the 1848 novel La Dame aux Camélias and its many adaptations. Demimondaine became a synonym for a courtesan or a prostitute who moved in these circles—or for a woman of social standing with the power to thumb her nose at convention and throw herself into the hedonistic nightlife. A woman who made that choice would soon find her social status lost, as she became "déclassée". The 1958 film Gigi, based on a 1944 novella by Colette, vividly portrays the world of the demimonde near the end of its existence. Gigi's Aunt Alicia, a legendary courtesan now enjoying a wealthy retirement, trains her teenage niece in elegant manners and deportment and the value of jewels and tries to stir her interest in fashion, in order to prepare her for life in the demimonde, pleasing the gentlemen who will provide her with the means to live beautifully—or miserably.

Almack's was the name of a number of establishments and social clubs in London between the 18th and 20th centuries. Two of the social clubs would go on to fame as Brooks's and Boodle's. Almack's most famous establishment was based in assembly rooms on King Street, St James's, and was one of a limited number of upper class mixed-sex public social venues in the British capital in an era when the most important venues for the hectic social season were the grand houses of the aristocracy. The site of the club, Almack's Assembly Rooms or Willis's Rooms, has become retrospectively interchangeable with the club, though for much of the club's lifetime, the rooms offered a variety of other entertainments with no connection to the club.

The social season, or season, refers to the traditional annual period when it is customary for members of a social elite of society to hold balls, dinner parties and charity events. Until World War I, it was also the appropriate time to be resident in the city rather than in the country in order to attend such events.

Fashion in the period 1795–1820 in European and European-influenced countries saw the final triumph of undress or informal styles over the brocades, lace, periwigs and powder of the earlier 18th century. In the aftermath of the French Revolution, no one wanted to appear to be a member of the French aristocracy, and people began using clothing more as a form of individual expression of the true self than as a pure indication of social status. As a result, the shifts that occurred in fashion at the turn of the 19th century granted the opportunity to present new public identities that also provided insights into their private selves. Katherine Aaslestad indicates how "fashion, embodying new social values, emerged as a key site of confrontation between tradition and change."

Sarah Sophia Child Villiers, Countess of Jersey, born Lady Sarah Fane, was an English noblewoman and banker, and through her marriage a member of the Villiers family.

Amelia Anne "Emily" Stewart, Marchioness of Londonderry, from 1794 until 1821 generally known as Lady Castlereagh, was the wife of the Georgian-era Irish statesman Robert Stewart, Viscount Castlereagh, who from 1812 to 1822 was British Foreign Secretary and Leader of the House of Commons. Well-connected by birth to the aristocracy and wife of a prominent politician who was Britain's leading diplomat during the close of the Napoleonic Wars, Lady Castlereagh was an influential member of Regency London's high society.

Boodle's is a London gentlemen's club, founded in January 1762, at No. 50 Pall Mall, London, by Lord Shelburne, the future Marquess of Lansdowne and Prime Minister of the United Kingdom.

Gentry are "well-born, genteel and well-bred people" of high social class, especially in the past. Gentry, in its widest connotation, refers to people of good social position connected to landed estates, upper levels of the clergy, and "gentle" families of long descent who in some cases never obtained the official right to bear a coat of arms. The gentry largely consisted of landowners who could live entirely from rental income, or at least had a country estate; some were gentleman farmers. In the United Kingdom, the term gentry refers to the landed gentry, the majority of the land-owning social class who were typically armigerous, but did not have a peerage. The adjective "patrician" describes in comparison other analogous traditional social elite strata based in cities, such as free cities of Italy, and the free imperial cities of Germany, Switzerland, and the Hanseatic League.

William Almack was an English valet, merchant and tavern owner, who became the founder of fashionable clubs and assembly-rooms. His Almack's Coffee House was bought in 1774 and became the gentlemen's club, Brooks's.