Alblas was born on 24 May 1940 in Barcelona, Spain. [1] He completed his Hogere Burgerschool education in Eindhoven and Harderwijk. Alblas studied urban planning at the Delft University of Technology until 1972. He subsequently worked as civil servant for the Ministry of Transport, Public Works and Water Management until 1995. Afterwards Alblas worked as an independent advisor until 2000. [1]

For the 2002 parliamentary elections Alblas was placed as number 21 on the party list for the Pim Fortuyn List. [2] He gained a seat in the House of Representatives and was a member between 23 May 2002 and 30 January 2003. [1] Shortly after becoming member Alblas hit a photojournalist after a heated Pim Fortuyn List fraction debate. Alblas promised to compensate any damages. [1] [3] [4] Only a couple of months after the elections, the government, which included the Pim Fortuyn List, fell. In the subsequent 2003 elections Alblas was not re-elected. [1] He decided to retire afterwards. [5]

In the last years of his life Alblas was an advisor to the Leefbaar Leiden party, a local party in Leiden. During this period he advised Leefbaar Leiden on how to protest against a planned Islamic centre. [6]

Wilhelmus Simon Petrus Fortuijn, known as Pim Fortuyn, was a Dutch politician, academic, author and businessman who formed his own party, Pim Fortuyn List in 2002.

The Pim Fortuyn List was a political party in the Netherlands named after its eponymous founder Pim Fortuyn, a former university professor and political columnist. The party was considered right-wing populist and nationalist as well as adhering to its own distinct ideology of Fortuynism according to some commentators.

The First Balkenende cabinet was the cabinet of the Netherlands from 22 July 2002 until 27 May 2003. The cabinet was formed by the political parties Christian Democratic Appeal (CDA), Pim Fortuyn List (LPF) and the People's Party for Freedom and Democracy (VVD) after the election of 2002. The right-wing cabinet was a majority government in the House of Representatives. It was the first of four cabinets of Jan Peter Balkenende, the Leader of the Christian Democratic Appeal as Prime Minister, with Eduard Bomhoff and Roelf de Boer of the Pim Fortuyn List and Johan Remkes of the People's Party for Freedom and Democracy serving as Deputy Prime Ministers.

Livable Rotterdam is a local political party in the municipality of Rotterdam in the Netherlands, which was founded by Ronald Sørensen in 2001. It won the council elections of March 2002 due to the charismatic leadership of Pim Fortuyn. This made it the city's largest political party, a position which for the previous thirty years had been held by the Labour Party. Livable Rotterdam started as a spin-off of the national party Livable Netherlands but is commonly seen as the local party of the LPF, the national party of Pim Fortuyn which was founded just after Pim Fortuyn was fired as lijsttrekker of the Livable Netherlands party in spring 2002.

General elections were held in the Netherlands on 15 May 2002. The elections were amongst the most dramatic in Dutch history, not just in terms of the electoral results, as they were completely overshadowed by the assassination of leader Pim Fortuyn only nine days before election day.

General elections were held in the Netherlands on 22 January 2003.

Johan Georg "Jan" Nagel is a Dutch politician who was a member of the Labour Party, and later formed his own parties. He is currently in the Pensioners' Party 50PLUS.

The Nawijn Group is a Dutch right-wing Fortuynist political faction founded by Hilbrand Nawijn, a member of the Dutch House of Representatives. It was founded in June 2005 when Nawijn split from his previous party Pim Fortuyn List (LPF). It remained a one-man faction in the parliament until August 2006 when LPF parliamentary chairman Gerard van As joined Nawijn after also abandoning the LPF. Nawijn also participated in the Zoetermeer 2006 city council elections and won five seats under the name Lijst Hilbrand Nawijn, but like Leefbaar Rotterdam and the Pim Fortuyn List both led by Pim Fortuyn in the 2002 elections, these are separate entities. In August 2006 Nawijn announced that he planned to participate in the 2006 Dutch general elections under the banner of the Party for the Netherlands.

Bernard Johannes "Joost" Eerdmans is a Dutch politician of the Livable Rotterdam (LR) party. He has been an Alderman and the Deputy mayor of Rotterdam since 15 May 2014. 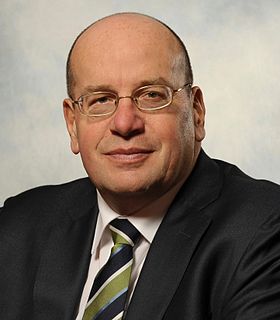 Fredrik "Fred" Teeven is a retired Dutch politician, bus driver and jurist. He is a member of the People's Party for Freedom and Democracy (VVD).

Olaf Frederik Stuger is a Dutch politician and Member of the European Parliament (MEP) from the Netherlands. He represents the Party for Freedom, part of the Europe of Nations and Freedom.

Eduard Jan Bomhoff is a Dutch economist. He served as Deputy Prime Minister and Minister of Health, Welfare and Sport for the Pim Fortuyn List (LPF) in the Cabinet Balkenende I from 22 July 2002 until 16 October 2002.

Hartog Hank Richard (Harry) Wijnschenk is a former Dutch politician. From 2002 to 2003 he was an MP for the Pim Fortuyn List (LPF), and later for the Wijnschenk Group.

Johannes Hendricus Simon "Jan" van Ruiten was a Dutch businessman and politician. He served in the House of Representatives for the Pim Fortuyn List (LPF) from 23 May 2002 until 30 January 2003.

Gerlof Johannes Jukema is a Dutch doctor and former politician for the Pim Fortuyn List (LPF).