Antonius Gerhardus Michael (Ton) Koopman (Dutch:  [ˈkoːpmɑn] ; born 2 October 1944) is a Dutch conductor, organist and harpsichordist. He is also professor at the Royal Conservatory of The Hague. In April 2003 he was knighted in the Netherlands, receiving the Order of the Netherlands Lion.

Koopman had a "classical education" and then studied the organ (with Simon C. Jansen), harpsichord (with Gustav Leonhardt), and musicology in Amsterdam. He specialized in Baroque music and received the Prix d'Excellence for both organ and harpsichord.

Among Koopman's most ambitious projects was the recording of the complete cycle of all of Bach's cantatas, [2] a project completed in 2005. This project had started while Koopman was an artist of the French Erato Classics label. However, after 12 volumes (36 CDs) the project was stalled when owner Warner Classics wound up its French subsidiary in 2002. Koopman was able to buy back rights for the first 12 volumes and continue the series in 2003 with his own label Antoine Marchand, distributed by Challenge Classics. "Antoine Marchand" is a French translation of his own name. [3]

Besides his work with the Amsterdam Baroque Orchestra & Choir, he is in frequent demand as guest conductor and as harpsichordist and organist. In 2011, Koopman began a three-year stint as artist-in-residence with the Cleveland Orchestra. [4]

His aim is always to achieve authenticity in performance, using exact copies of historical instruments from the time of the composer, and adopting the performing style of the composers or their contemporaries. The scholar (and fellow keyboardist/conductor) John Butt has criticised Koopman's interpretation of Bach's Goldberg variations for its overuse of ornamentation, [5] which he attributes to a desire to differentiate his interpretation from those of Gustav Leonhardt.

Koopman is married to Tini Mathot, who is also a harpsichordist and fortepianist, and the two frequently perform together. Mathot is also his chief recording producer, as well as a teacher at the Royal Conservatory. [6] On 11 October 2012 the documentary Live to be a hundred – a year in the life of Ton Koopman was released in Dutch cinemas.

Ketil Are Haugsand is a Norwegian harpsichordist and conductor. 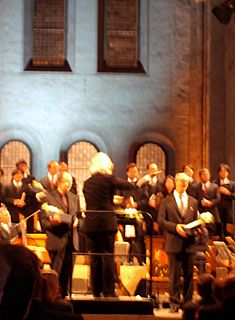 Masaaki Suzuki is a Japanese organist, harpsichordist and conductor, and the founder and musical director of the Bach Collegium Japan. With this ensemble he is recording the complete choral works of Johann Sebastian Bach for the Swedish label BIS Records, for which he is also recording Bach's concertos, orchestral suites, and solo works for harpsichord and organ. He is also an artist-in-residence at Yale University and the principal guest conductor of its Schola Cantorum, and has conducted orchestras and choruses around the world.

Lars Ulrik Mortensen is a Danish harpsichordist and conductor largely in Baroque solo and chamber music and early music repertory. He was a professor in Munich in 1996-99 and has since then been artistic director of Concerto Copenhagen. He received the Léonie Sonning Music Prize in 2007.