Ton Steine Scherben (German pronunciation: [ˈtoːn ˈʃtaɪnə ˈʃɛːɐ̯bən] ) was one of the first and most influential German language rock bands of the 1970s and early 1980s. [1] [2] [3] [4] Well known for the highly political and emotional lyrics of vocalist Rio Reiser, [1] they became a musical mouthpiece of new left movements, such as the squatting movement, during that time in Germany and their hometown of West Berlin in particular. Today, after the band's demise in 1985, and the death of Rio Reiser in 1996, Ton Steine Scherben have retained a cult following and popularity in the related scenes. Recently, some of the remaining members have given reunion concerts.

Ton Steine Scherben's literal English translation is "Clay Stones Shards"; in German, "Ton" can mean "sound" as well, so the band's name may be considered to be an amphibology. Singer Rio Reiser usually told journalists the name was taken from a description by pioneer archeologist Heinrich Schliemann of what he saw when he first came to the site of ancient Troy. Other members of the band claim in the biography "Keine Macht für Niemand - Die Geschichte der Ton Steine Scherben" ("No power for no-one - the story of Ton Steine Scherben") that it is a play on the name of the West German labor union Bau-Steine-Erden (Construction-Stone-Earth). The band name is also a tribute to The Rolling Stones and to "Die roten Steine" (The red stones), a trainee theatre group from Berlin.[ citation needed ]

Formed in 1970 by vocalist and guitarist Rio Reiser (his legal name was Ralph Christian Möbius), guitarist R.P.S. Lanrue  [ de ] (legally named Ralph Peter Steitz), Kai Sichtermann  [ de ] on bass guitar, and drummer Wolfgang Seidel  [ de ] when the members were all around 20 years of age. They are nowadays considered to have been one of the first genuine German-language rock bands; [2] [3] coming into being after the even more obscure Ihre Kinder  [ de ], but well before Udo Lindenberg's Panikorchester, the first widely successful, mainstream German language rock act. Their first big-stage appearance was at an Open-Air on 6 September 1970 on the Fehmarn stage where Jimi Hendrix had had his last appearance directly before. A house right next to the stage went up in flames while they were still playing; [2] it has been alleged that it had been set on fire by the security personnel who had just received news that the event's organizers had disappeared with all the revenues. [2] Still many people believed that Ton Steine Scherben had set the stage on fire, which gave them tremendous credibility in the radical scene. [3] [4]

Die Scherben released their material through their own label. [1] The "David Volksmund Produktion  [ de ]" (David from "David and Goliath"; Volksmund = the people's voice) released not only the LPs of the Scherben but also of "Caramboulage  [ de ]", a "girl band" which consisted of Angie Olbrich, Elfie-Esther Steitz-Praeker (R.P.S.'s sister) and Britta Neander  [ de ] (died in 2005); also they were engaged in the German gay-movement, so they released two LPs of "Brühwarm" and a Boy-Group namend "Stricher" ["hustler" or "the moneyboys"]; the last record of the David-Volksmund-Poduktion is the LP "Sternschnuppen" of the singer-songwriter Misha Schoeneberg  [ de ]. In 2003 the DVP was brought back to life.

In the middle of the 1970s the pressure on the Scherben from their anarchistic fanbase grew. [2] The Band felt more and more like a "music-box", playing for the radical scene on cue. [2] While the band attempted a shift toward more personal lyrics, [1] the radical scene insisted that they remain as political as before. [2] Under this pressure the band escaped from Berlin to Fresenhagen  [ de ], [2] a little town in Nordfriesland, where they bought an old farm, which the numerous bandmembers, about 16 in all, repaired. There they tried to make their dream of "working & living together" come true. [2]

After a period of being managed by Claudia Roth (later to become co-chairwoman of the German Green Party), they disbanded in 1985 when the band's debt became unbearable and because they thought that everything that could be said was said. [2] [4]

Singer Rio Reiser then embarked on a solo career until his death in 1996. At that time the rest of "Ton Steine Scherben" reunited one more time for a farewell concert.

In 2014, 29 years after the split the band reunited and went on tour in Germany, Austria and Switzerland.

Ton Steine Scherben were pioneers in German music culture. Their style has been described as rock with a "renegade stance, what in later years would be dubbed 'punk'." [1]

Their lyrics were at the beginning anti-capitalist and anarchist. [2] [3] [4] They did not think the socialism of the Soviet Union was anywhere near real socialism, [2] [4] and had connections to the squatter scene [2] (e.g. Rauch-Haus-Song) and the German Red Army Faction [2] during the time before the latter turned to direct guerrilla actions. Later Ton Steine Scherben toned down on political issues and explored more personal themes like freedom, love, drugs, and sadness. [1] [2] [4] They also contributed to two full-length concept album about homosexuality which were issued under the name Brühwarm (literally: boiling warm) in cooperation with a gay-revue group.

All their albums were self-published and promoted. [1] Revenues from the albums were slim and the band was often expected by other leftists to give free "solidarity concerts" at political events, both of which contributed to the band's perpetually poor financial situation and its eventual dissolution. [1] Only few singles were released, which rarely received commercial attention. The Scherben were also on so called "black lists" due to their perceived left extremism, and were thus not played on Germany's public radio stations of the time (private radio was only legalized in Germany in the late 1980s, after the band's dissolution).

The following albums were issued after the band ceased recording: 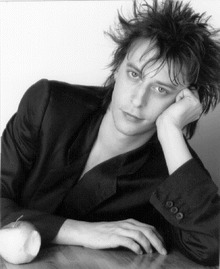 Rio Reiser, was a German rock musician and singer of rock group Ton Steine Scherben. Reiser supported squatting in the early 1970s and later the green political party Die Grünen. After the German reunification, he joined the Party of Democratic Socialism.

Brühl is a municipality in the Rhein-Neckar district of Baden-Württemberg, Germany. The former fishing village along the Rhine has become a satellite of a growing Mannheim. Many of the residents of Brühl work in Mannheim. Brühl is known as the hometown of former tennis player Steffi Graf.

Embryo, Missus Beastly, Sparifankal, Ton Steine Scherben and Julius Schittenhelm decided to take their fate into their own hands in 1976. Setting themselves clearly apart from the phonograph industry, they founded their own record company and cooperatively organized the distribution. “Music distributed by the musicians” was the primary guiding principle.

Reiser may refer to:

Sumo was a 1980s Argentine alternative rock band, heavily influenced by post-punk and reggae. Led by Italian-born Luca Prodan, it remained underground for most of its short activity but was extremely influential in shaping contemporary Argentine rock. Sumo is credited with introducing British post-punk to the Argentine scene, mostly by songs with lyrics in English, and with providing a visceral counterpoint to the progressive and nueva canción influences then dominant in the country's rock en español.

Blumfeld was an indie-pop band from Hamburg, Germany, formed by singer and songwriter Jochen Distelmeyer. The name of the band was taken from the main character of the short story "Blumfeld, ein älterer Junggeselle" by Franz Kafka. Blumfeld are counted among the most significant representatives of the Hamburger Schule and are considered to be one of the most successful combos of the German indie scene.

"I Want Out" is a song by the German power metal band Helloween from the album Keeper of the Seven Keys, Pt. 2, that was released as a single in 1988.

This following is a list of the work released by German rock band Ton Steine Scherben. It is currently missing the (few) singles issued by the band. 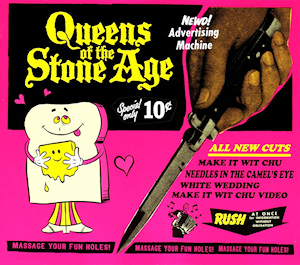 "Make It wit Chu" is the third single by Queens of the Stone Age from their 2007 album Era Vulgaris.

Stadum is a municipality in the district of Nordfriesland, in Schleswig-Holstein, Germany.

Embryo is a band from Munich which began in 1969, although its origin can be traced to the 1950s in Hof when Christian Burchard and Dieter Serfas met the age of 10. The band was described by one critic as "the most eclectic of the krautrock bands."

The Rauch-Haus-Song is a track performed by West Berlin band Ton Steine Scherben on their second studio album Keine Macht für Niemand. It has become famous in leftwing circles in Germany.

Warum geht es mir so dreckig? is the first album released by the German rock band Ton Steine Scherben. It includes—among other pieces—the song Macht kaputt, was euch kaputt macht, which expressed the built-up anger and radicalization of the youth of the late 1960s and early 1970s.

Keine Macht für Niemand is the name of both the second album and best-known song by the band Ton Steine Scherben. The double album, released in 1972, is also sometimes called "die Weiße" in reference to its simple cover with a white background and black text.

Wenn die Nacht am tiefsten… is the third album released by Ton Steine Scherben, and is the last one released before their six-year break from recording. It shows the first signs of a change in genre: moving away from Macht kaputt was euch kaputt macht towards Halt dich an deiner Liebe fest.

IV is a double album released by Ton Steine Scherben. Because of the black album cover, it is also referred to as die Schwarze. It is a collection of various influences from folk to punk and marks a departure from the band's earlier work, even though it continues the change that began with the previous album Wenn die Nacht am tiefsten…. Anarchist slogans such as "destroy what destroys you" or "no power for nobody" are no longer prevalent, although some of the songs were political, such as Der Turm stürzt ein.

Kraftklub is a five-person band from Chemnitz, Germany. Their music combines rock / indie and Sprechgesang with German lyrics and is generally considered to be a mixture of rap and indie.