The tonalamatl [toːnaˈlaːmatɬ] is a divinatory almanac used in central Mexico in the decades, and perhaps centuries, leading up to the Spanish conquest. The word itself is Nahuatl in origin, meaning "pages of days". [1] [2]

The tonalamatl was structured around the sacred 260-day year, the tonalpohualli . This 260-day year consisted of 20 trecena of 13 days each. Each page of a tonalamatl represented one trecena, and was adorned with a painting of that trecena's reigning deity and decorated with the 13 day-signs and 13 other glyphs. These day-signs and glyphs were used to cast horoscopes and discern the future. 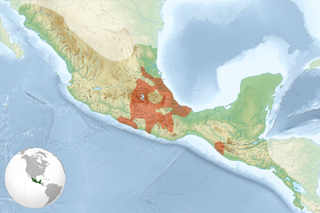 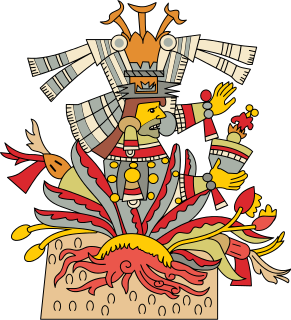 Mayahuel is the female deity associated with the maguey plant among cultures of central Mexico in the Postclassic era of pre-Columbian Mesoamerican chronology, and in particular of the Aztec cultures. As the personification of the maguey plant, Mayahuel is also part of a complex of interrelated maternal and fertility goddesses in Aztec religion and is also connected with notions of fecundity and nourishment.

Chalchiuhtlicue[t͡ʃaːɬt͡ʃiwˈt͡ɬikʷeː] is an Aztec deity of water, rivers, seas, streams, storms, and baptism. Chalchiuhtlicue is associated with fertility and she is the patroness of childbirth. Chalchiuhtlicue was highly revered in Aztec culture at the time of the Spanish conquest and she was an important deity figure in the Postclassic Aztec realm of central Mexico. Chalchiuhtlicue belongs to a larger group of Aztec rain gods and she is closely related to another Aztec water god, Chalchiuhtlatonal.

Ōmeteōtl is a name sometimes used to refer to the pair of Aztec deities Ometecuhtli and Omecihuatl, also known as Tōnacātēcuhtli and Tonacacihuatl. Ōme translates as "two" or "dual" in Nahuatl and teōtl translates as "god". The existence of such a concept and its significance is a matter of dispute among scholars of Mesoamerican religion.

The Maya calendar is a system of calendars used in pre-Columbian Mesoamerica and in many modern communities in the Guatemalan highlands, Veracruz, Oaxaca and Chiapas, Mexico.

The Aztec or Mexica calendar is the calendrical system used by the Aztecs as well as other Pre-Columbian peoples of central Mexico. It is one of the Mesoamerican calendars, sharing the basic structure of calendars from throughout ancient Mesoamerica.

In Aztec religion, Ītzpāpālōtl[iːt͡spaːˈpaːlot͡ɬ] was a striking skeletal warrior goddess who ruled over the paradise world of Tamoanchan, the paradise of victims of infant mortality and the place identified as where humans were created. She is the mother of Mixcoatl and is particularly associated with the moth Rothschildia orizaba from the family Saturniidae. Some of her associations are birds and fire. However, she primarily appears in the form of the Obsidian Butterfly.

Tamoanchan[tamoˈant͡ʃan] is a mythical location of origin known to the Mesoamerican cultures of the central Mexican region in the Late Postclassic period. In the mythological traditions and creation accounts of Late Postclassic peoples such as the Aztec, Tamoanchan was conceived as a paradise where the gods created the first of the present human race out of sacrificed blood and ground human bones which had been stolen from the Underworld of Mictlan.

Itzcoatl (1380-1440) was the fourth king of Tenochtitlan, and first emperor of the Aztec empire ruling from 1427 to 1440, the period when the Mexica threw off the domination of the Tepanecs and laid the foundations for the eventual Aztec Empire.

Tlacaelel I was the principal architect of the Aztec Triple Alliance and hence the Mexica (Aztec) empire. He was the son of Emperor Huitzilihuitl and Queen Cacamacihuatl, nephew of Emperor Itzcoatl, father of poet Macuilxochitzin, and brother of Emperors Chimalpopoca and Moctezuma I. 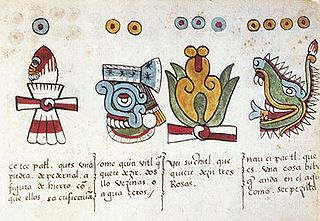 The tōnalpōhualli, meaning "count of days" in Nahuatl, is an Aztec version of the 260-day calendar in use in pre-Columbian Mesoamerica, eg. the Maya equivalent Tzolkin. This calendar is neither solar nor lunar, but rather consists of 20, 13-day periods. Each trecena is ruled by a different deity.

The Calmecac was a school for the sons of Aztec nobility in the Late Postclassic period of Mesoamerican history, where they would receive rigorous religious and military training. The calmecac tied together the military, political and sacred hierarchies of the community. The two main primary sources for information on the calmecac and telpochcalli are in Bernardino de Sahagún's Florentine Codex of the General History of the Things of New Spain and part 3 of the Codex Mendoza. Although the calmecac has been characterized as for elites only, Sahagun's account says that at times commoners, macehualtin were assigned to the calmecac as well and trained for the priesthood. The Tēlpochcalli was where mostly commoners and some noble youths received military training, but would have been precluded from the higher ranks of power. Codex Mendoza's account of the calmecac emphasizes the possibilities of upward mobility for young commoner men, (macehualtin), educated in the telpochcalli. The placement of noble youth in the telpochcalli might have been by lesser wives' or concubines' sons or younger sons, perhaps of commoner status so that the boys did not have to compete with noble youths in the calmecac. Codex Mendoza's account largely ignores class distinctions between the two institutions.

Aztec codices are books written by pre-Columbian and colonial-era Nahuas in pictorial and/or alphabetic form.

The Codex Borbonicus is an Aztec codex written by Aztec priests shortly before or after the Spanish conquest of Mexico. It is named after the Palais Bourbon in France and kept at the Bibliothèque de l'Assemblée Nationale in Paris. The codex is an outstanding example of how Aztec manuscript painting is crucial for the understanding of Mexica calendric constructions, deities, and ritual actions. In 2004 Maarten Jansen and Gabina Aurora Pérez Jiménez proposed that it be given the indigenous name Codex Cihuacoatl, after the goddess Cihuacoatl.

The Codex Borgia or Codex Yoalli Ehēcatl is an aztec ritual and divinatory manuscript. It is one of a handful of codices that some scholars believe to have been written before the Spanish conquest of Mexico, somewhere within what is now southern or western Puebla, though some scholars also argue that it was produced in the first decades after the conquest as a copy of an earlier precolumbian codex. The Codex Borgia is a member of, and gives its name to, the Borgia Group of manuscripts.

The Primeros Memoriales is an illustrated Nahuatl-language manuscript compiled by the Franciscan missionary Bernardino de Sahagún and his indigenous assistants in Tepepulco as the first part of his project to document pre-Columbian Nahua society, known as the Historia General de las Cosas de Nueva España.

The Cantares Mexicanos is the name given to a manuscript collection of Nahuatl songs or poems recorded in the 16th century. The 91 songs of the Cantares form the largest Nahuatl song collection, containing over half of all known traditional Nahuatl songs. It is currently located in the National Library of Mexico in Mexico City. A description is found in the census of prose manuscripts in the native tradition in the Handbook of Middle American Indians.

Karl Anton Nowotny was an Austrian ethnographer, art historian and academic, specialising in the study of Mesoamerican cultures. He is most renowned for his analyses and reproductions of Mesoamerican codices, and his commentaries on their iconography and symbolisms.