Last updated December 18, 2020
Not to be confused with Tocantins.
For the river in the same state, see Tonantins River.
Municipality in North, Brazil

Tonantins is a municipality in Amazonas, in northwest Brazil. Its population was 17,079 as of 2005, all of which were Brazilians. [1] It is on the Amazon River and is 867 km upstream (west) of Manaus, the state capital. The municipality is directly east of and overlaps parts of the Jutaí-Solimões Ecological Station. [2] It is only accessible via boat.

The primary economy is subsistence agriculture. The main product is cassava (yuca), followed by beans, rice, and corn.

Around 1754, the Spaniards continued to penetrate the western Amazon rainforest, which worried the Portuguese colonial government. In the region of the Putumayo River, with the help of the Franciscans, they had already established several villages and tried to create a fort at the mouth of the river, near the Amazon River. The river had belonged to Spain until then, by virtue of the Treaty of Madrid, but the Spanish wanted to recover at all costs the lost positions, neglecting the Treaty of 1750. [3]

In 1766 they left the fort and went to the river Napo, facing the difficulties of communication with the Papal Post Office and the tropical climate. In 1768 the position, abandoned by the Spanish, was taken by soldiers of the Portuguese captain, who by order of the Governor of the colonial state of the Grão-Pará and Rio Negro, Fernando da Costa de Ataíde Teive, was named Fort of São Fernando do Içá. [4]

New expeditions followed when Colonel Joaquim Tinoco Valente, governor of the Grão-Pará and Rio Negro, became captain; João Pereira Caldas, who was also military, was Xavier de Sampaio's spokesman. The commander of the war expeditions against the invaders was Captain Felipe Sturn.

On October 1, 1777, Portugal and Spain reinstated restrictions in the South American colonies, keeping the 1777 Treaty of Saint Idelfonso in force. In this treaty, the boundaries of the Amazon range from the Madeira River to the central Mamoré River, to the mouth of the Madeira, and straight to the bank of the Javari River, bounded by the Amazon River. [5]

The first village of Tonantins was founded by the Carmelite missionary Frei Matias Diniz, who was settled by the Caiuvicenas natives, and murdered by rival indigenous from a tribe called Tonantins, which gives the name of the municipality and where today it is known as the district of São Francisco.

The village was reborn between 1774 and 1775 by a Lord called Sampaio, who gathered with him the indians of the Caiuvicenas, Passés and Tikunas tribes. On the way, they were catechized by others who came on expeditions, thus building churches and a school.

In 2017, Tonantins was featured in the television show 90 Day Fiancé as the hometown of Karine Martins, one of the cast members. [6]

Acre is a state located in the west of the North Region of Brazil and the Amazonia Legal. Located in the westernmost part of the country, at a two-hour time difference from Brasília, Acre is bordered clockwise by the Brazilian states of Amazonas and Rondônia to the north and northeast, the Bolivian department of Pando to the southeast, and the Peruvian regions of Madre de Dios, Ucayali and Loreto to the south and west. 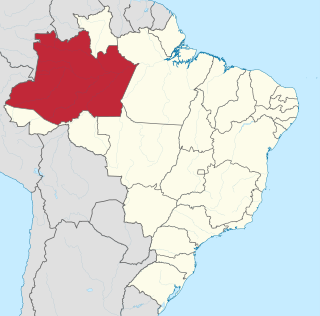 Amazonas is a state of Brazil, located in the North Region in the northwestern corner of the country. It is the largest Brazilian state by area and the 9th largest country subdivision in the world, and is greater than the areas of Uruguay, Paraguay, and Chile combined. Mostly located in the Southern Hemisphere, it is the third largest country subdivision in the Southern Hemisphere after the Australian states of Western Australia and Queensland. It would be the sixteenth largest country in land area, slightly larger than Mongolia. Neighbouring states are Roraima, Pará, Mato Grosso, Rondônia, and Acre. It also borders the nations of Peru, Colombia and Venezuela. This includes the Departments of Amazonas, Vaupés and Guainía in Colombia, as well as the Amazonas state in Venezuela, and the Loreto Region in Peru.

Pará is a State of Brazil, located in northern Brazil and traversed by the lower Amazon River. It borders the Brazilian states of Amapá, Maranhão, Tocantins, Mato Grosso, Amazonas and Roraima. To the northwest are the borders of Guyana and Suriname, to the northeast of Pará is the Atlantic Ocean. The capital and largest city is Belém, which is located at the mouth of the Amazon. The state, which is home to 4.1% of the Brazilian population, is responsible for just 2.2% of the Brazilian GDP.

Porto Velho is the capital of the Brazilian state of Rondônia, in the upper Amazon River basin, and a Catholic Metropolitan Archbishopric. The population is 519,531 people. Located on the border of Rondônia and the state of Amazonas, the town is an important trading center for cassiterite, the mining of which represents the most important economic activity in the region, as well as a transportation and communication center. It is on the eastern shore of the Madeira River, one of the main tributaries of the Amazon River. It is also Rondônia's largest city, and the largest state capital of Brazil by area. 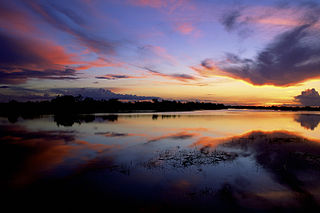 Belém is a Brazilian city with 2,491,052 people residing in its Metropolitan Region. The capital city itself has 1,485,732 inhabitants. It is the capital and largest city of the state of Pará in the country's north. It is the gateway to the Amazon River with a busy port, airport, and bus/coach station. Belém lies approximately 100 km upriver from the Atlantic Ocean, on the Pará River, which is part of the greater Amazon River system, separated from the larger part of the Amazon delta by Ilha de Marajó. With an estimated population of 1,439,561 people — or 2,249,405, considering its metropolitan area — it is the 11th most populous city in Brazil, as well as the 16th by economic relevance. It is the second largest in the North Region, second only to Manaus, in the state of Amazonas. 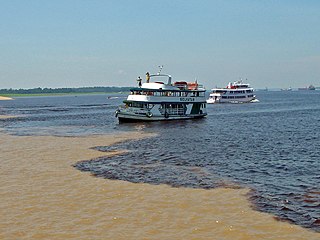 Solimões is the name often given to upper stretches of the Amazon River in Brazil from its confluence with the Rio Negro upstream to the border of Peru. At the confluence, the river is already by far the largest river in the world, even though its two largest tributaries have not yet entered. The Solimões portion of the Amazon river lies entirely in the State of Amazonas, Brazil, and some portion of the state is often referred to as the "Solimões region". The ecoregion of the Solimões river drainage basin is entirely tropical rainforest.

Santo Antônio do Içá is a community and a municipality in the state of Amazonas near the Colombian border in Brazil. The population is 23,688 in an area of 12,307 km². The municipality was created in 1955 out of São Paulo de Olivença. The city is served by Ipiranga Airport. 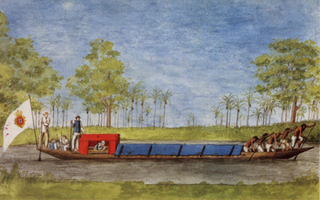 Alexandre Rodrigues Ferreira was a naturalist born in Brazil. He undertook an extensive journey which crossed the interior of the Amazon Basin to Mato Grosso, between 1783 and 1792. During this journey, he described the agriculture, flora, fauna, and native inhabitants.

Jutaí-Solimões Ecological Station is an ecological station in the state of Amazonas, Brazil. It protects an area of flooded and terra firme forest in the Amazon biome.

Juami-Japurá Ecological Station is an ecological station in the municipality of Japurá, Amazonas, Brazil. 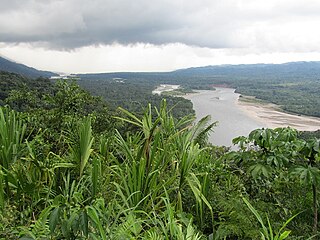 This is a timeline of Amazon history, which dates back at least 11,000 years ago, when humans left indications of their presence in Caverna da Pedra Pintada.

The Jutaí River is a river in Amazonas state in north-western Brazil. 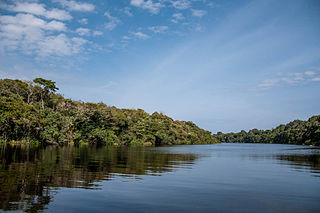 The Amazon biome contains the Amazon rainforest, an area of tropical rainforest, and other ecoregions that cover most of the Amazon basin and some adjacent areas to the north and east. The biome contains blackwater and whitewater flooded forest, lowland and montane terra firme forest, bamboo and palm forest, savanna, sandy heath and alpine tundra. Some areas are threatened by deforestation for timber and to make way for pasture or soybean plantations.

The Cujubim Sustainable Development Reserve is a sustainable development reserve in the state of Amazonas, Brazil. 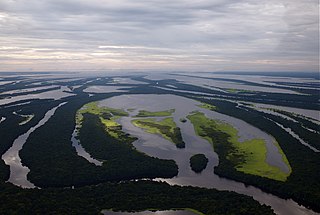 The Central Amazon Ecological Corridor is an ecological corridor in the state of Amazonas, Brazil, that connects a number of conservation units in the Amazon rainforest. The objective is to maintain genetic connectivity between the protected areas without penalizing the local people, where possible using participatory planning that involves all affected actors.

The Rio Jutaí Extractive Reserve is an extractive reserve in the state of Amazonas, Brazil.