OANTON was dedicated in February 1942 in a ceremony attended by the President of Mexico, Manuel Ávila Camacho, and other dignitaries. [2] The project was begun some time earlier by Luis Enrique Erro, who was an astronomer by training but for many years had been the Mexican ambassador to the United States. In 1954 Guillermo Haro became the director of OANTON, and in 1971 the observatory became INAOE under his direction. [3] In the same year INAOE began building a new observatory in Cananea, Sonora, which is now called Guillermo Haro Observatory. [4]

OAN - Tonantzintla was established in 1948, when observing conditions at the OAN location in Valley of Mexico became too degraded by light pollution to be useful. OAN was first established on the balcony of Chapultepec Castle in Mexico City in 1878. [4] It was moved to Tacubaya, then on the outskirts of the city, to a building that was started in 1884 and completed in 1909. [7] OAN completed the next move to Tonantzintla in 1951. By the mid-1960s, the night sky over the observatory became so polluted that research was hampered. [8] OAN began looking for a new location 1966, and determined that Sierra de San Pedro Mártir would be an excellent site. [9] The first telescope at the new observatory was installed in 1969 using a mirror polished by OANTON and UNAM. [10]

The Tonantzintla Catalogue (TON) is a list of stars published in the Bulletin [16] of Tonantzintla and Tacubaya Observatories.

The Eskimo Nebula, also known as the Clown-faced Nebula, Lion Nebula, or Caldwell 39, is a bipolar double-shell planetary nebula (PN). It was discovered by astronomer William Herschel in 1787. The formation resembles a person's head surrounded by a parka hood. It is surrounded by gas that composed the outer layers of a Sun-like star. The visible inner filaments are ejected by a strong wind of particles from the central star. The outer disk contains unusual, light-year-long filaments.

Messier 72 is a globular cluster in the south west of the very mildly southern constellation of Aquarius. 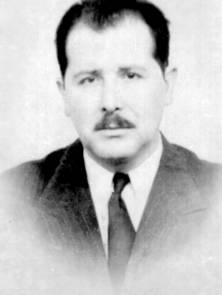 Guillermo Haro Barraza was a Mexican astronomer. Through his own astronomical research and the formation of new institutions, Haro was influential in the development of modern observational astronomy in Mexico. Internationally, he is best known for his contribution to the discovery of Herbig–Haro objects.

Teide Observatory, IAU code 954, is an astronomical observatory on Mount Teide at 2,390 metres (7,840 ft), located on Tenerife, Spain. It has been operated by the Instituto de Astrofísica de Canarias since its inauguration in 1964. It became one of the first major international observatories, attracting telescopes from different countries around the world because of the good astronomical seeing conditions. Later the emphasis for optical telescopes shifted more towards Roque de los Muchachos Observatory on La Palma.

The Guillermo Haro Observatory is an astronomical observatory owned and operated by the National Institute of Astrophysics, Optics and Electronics in the Mexican state of Sonora. It is located 13 km (8.1 mi) north of Cananea and 85 km (53 mi) south-east of Mount Hopkins. It is named after Professor Guillermo Haro. 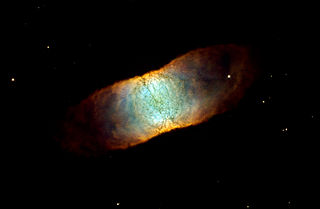 IC 4406 is a planetary nebula near the western border of the constellation Lupus, the Wolf. It has dust clouds and has the shape of a torus. Despite this, it looks somewhat rectangular because it is seen from its side as viewed from Earth, almost in the plane of its equator.

NGC 6357 is a diffuse nebula near NGC 6334 in the constellation Scorpius. The nebula contains many proto-stars shielded by dark discs of gas, and young stars wrapped in expanding "cocoons" or expanding gases surrounding these small stars. It is also known as the Lobster Nebula and the Madokami Nebula by some fans of the Japanese anime Madoka Magica due to its resemblance to the main character from the anime, and a popular fan petition to rename it.

NGC 2867 is an elliptical Type II planetary nebula in the southern constellation of Carina, just over a degree to the NNW of the star Iota Carinae. It was discovered by John Herschel on April 1, 1834. Herschel initially thought he might have found a new planet, but on the following night he checked again and discovered it hadn't moved. The nebula is located at a distance of 7,270 light-years from the Sun. 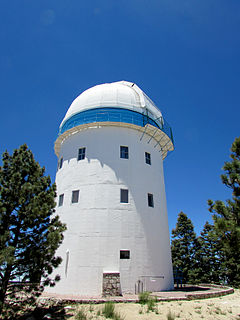 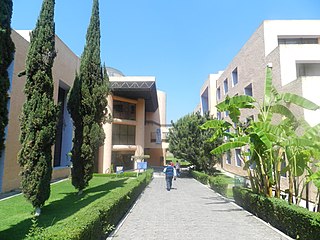 The National Institute of Astrophysics, Optics and Electronics is a Mexican science research institute located in Tonantzintla, Puebla.

OY Carinae is an eclipsing binary system approximately 277 light-years away from the Sun, classed as a cataclysmic variable. The system comprises an eclipsing white dwarf and red dwarf that orbit each other every 1.51 hours, and possibly a yet unconfirmed third low-mass (substellar?) companion.

The National Astronomical Observatory of Chile is an astronomical observatory owned and operated by the Department of Astronomy of the University of Chile (UCh). It is located on Cerro Calán, a hill in the commune of Las Condes. The commune is an eastern suburb of Santiago located in Santiago Province of the Santiago Metropolitan Region. OAN was founded in 1852 and became a part of UCh in 1927. The facility on Cerro Calán was completed in 1962.

NGC 2467, nicknamed the "Skull and Crossbones Nebula," is a star-forming region whose appearance has occasionally also been likened to that of a colorful mandrill. It includes areas where large clouds of hydrogen gas incubate new stars. This region was one of the areas featured in the book Hubble’s Universe: Greatest Discoveries and Latest Images by Terence Dickinson. 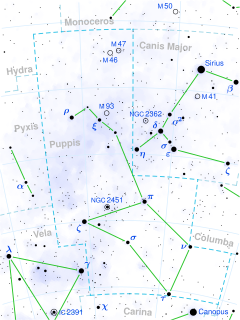 NS Puppis is an irregular variable star in the constellation Puppis. Its apparent magnitude varies between 4.4 and 4.5.

KU Hydrae is a binary star in the constellation Hydra. The primary star is an Alpha2 Canum Venaticorum variable with its apparent magnitude varying from 0.05 magnitudes over a period of 33.97 days.

The Revista Mexicana de Astronomía y Astrofísica is a peer-reviewed scientific journal of astronomy founded in 1974. It is a successor to the Boletín de los Observatorios de Tonantzintla y Tacubaya which was published from 1952 to 1972. 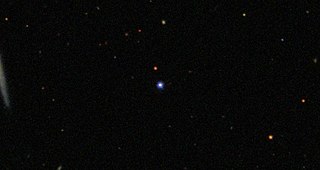 TON 618 is a hyperluminous, broad-absorption-line, radio-loud quasar located near the border of the constellations Canes Venatici and Coma Berenices, approximately 10.4 billion light-years from Earth. It possesses one of the most massive black holes ever found, with a mass of 66 billion M☉.

Gloria Suzanne Koenigsberger Horowitz is a Mexican astrophysicist and professor working at the National Autonomous University of Mexico (UNAM). Her areas of expertise are in stellar spectroscopy, massive stars and binary interaction effects. She was director of UNAM's Instituto de Astronomía (1990-1998) and a leading member of the team that succeeded in establishing the first connection to the Internet in Mexico in 1989.