The Tonawanda Wildlife Management Area is a 5,600-acre (23 km2) wildlife management area (WMA) located in western New York State. [1] It is located primarily within Niagara County and Genesee County, with a small portion within Orleans County. It is managed by the New York State Department of Environmental Conservation.

Along with the adjacent Iroquois National Wildlife Refuge to the east and the Oak Orchard Wildlife Management Area farther to the east, Tonawanda WMA contributes to a continuous 19,000-acre (77 km2) region dedicated to conservation and wildlife management [1] known as the Alabama Swamp Complex. Approximately 100,000 migratory birds pass through the area each year.

The wildlife management area is located in a swampy area that has historically been a stopping point for migratory wildfowl. The area was hunted by Native Americans and early settlers.

The land was purchased by New York State to protect the wildlife from over-hunting using funds from duck stamps and taxes on firearms and ammunition. The stated objectives of the WMA are increased waterfowl production, waterfowl protection, and flood control. [1]

The Tonawanda WMA consists of 5,600 acres (23 km2), consisting primarily of wetlands. [1] The WMA is on a floodplain of the Tonawanda Creek. Water retention is facilitated by impoundments, which increase wetland area and control flooding in nearby inhabited areas.

NY Route 77, Lewiston Road, passes through the north part of the WMA. The south boundary of part of Tonawanda WMA is the Tonawanda Indian Reservation.

The WMA is located adjacent to the Iroquois National Wildlife Refuge and the Oak Orchard Wildlife Management Area, both located east of the Tonawanda WMA. Located several miles north is the 401-acre (162 ha) Hartland Swamp Wildlife Management Area in the Town of Hartland. [2] The former John White Memorial Game Farm, located south of the community of Alabama on NY-77 at the junction with NY-63, is also available for public use.

Hunting, fishing, hiking, bird watching and snowshoeing is permitted at Tonawanda WMA. Trapping is also allowed via permits assigned by lottery. Prohibited activities include the use of motorized vehicles (except in parking areas), and the use of motorized boats. Camping is available only to groups with a permit. [1]

Except for Bartel Road and Meadville Road, both of which pass through the WMA, all other roads are unpaved and reserved for official use. Pedestrian traffic in the WMA uses these roads and other paths along the dikes, which divides the WMA into separate marshes. Two observation areas with ample parking and public information are located along Lewiston Road. 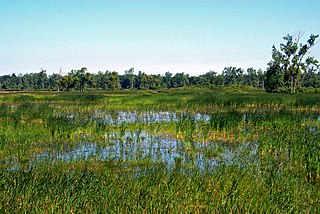 The Iroquois National Wildlife Refuge is a wildlife refuge in Genesee and Orleans counties in western New York. The refuge is located between the cities of Buffalo and Rochester and is operated by the United States Fish and Wildlife Service. 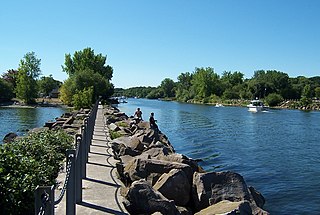 Oak Orchard Creek is a tributary of Lake Ontario in Orleans County, New York in the United States.

Cherry Plain State Park is a 175-acre (0.71 km2) state park located in Rensselaer County, New York in the United States. The park is located in Cherry Plain at the southwest part of the Town of Berlin, near the Massachusetts border. Outdoor recreational opportunities are also available within the Capital District Wildlife Management Area, a 4,153-acre (16.81 km2) conservation area that nearly surrounds the park. 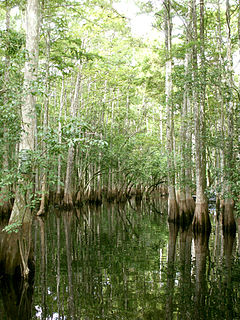 Tosohatchee Wildlife Management Area is located along the St. Johns River east of Orlando in Christmas on Taylor Creek Road, off SR 50.

The Oak Orchard Wildlife Management Area is an approximately 2,500-acre (10 km2) wildlife management area (WMA) located in western New York, United States. Most of this conservation area is in the northwest part of Genesee County, with a small northern portion in Orleans County.

The Hartland Swamp Wildlife Management Area is a 401-acre (1.62 km2) wildlife management area (WMA) located in western New York, USA. Hartland Swamp WMA is located northeast of Lockport in the Town of Hartland in northeastern Niagara County. It is managed by the New York State Department of Environmental Conservation.

Tillman Road Wildlife Management Area is a 235-acre (0.95 km2) conservation area located within the Town of Clarence in Erie County, western New York. It is managed by the New York State Department of Environmental Conservation.

Great Baehre Swamp is a New York state wetland located inside the Town of Amherst in Erie County, New York, United States. The area is characterized as a silver maple-ash swamp of 270 acres (1.1 km2), much of which is protected by conservation areas owned by the town and New York State.

Princess Anne Wildlife Management Area is a 1,546-acre (6.26 km2) Wildlife Management Area (WMA) in Virginia Beach, Virginia. The area comprises four tracts; the Beasely, Trojan, and Whitehurst tracts are located on the western shore of Back Bay, separated from the Atlantic Ocean by False Cape, while the Pocahontas Tract, consisting of a number of marshy islands, is at the south end of the bay. A variety of natural communities may be found on all tracts, and water levels are manipulated to help promote the growth of food for waterfowl that migrate and overwinter in the area. 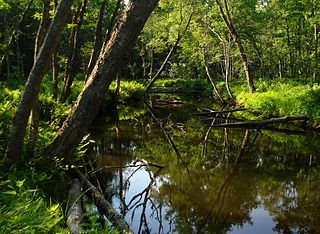 New York State Wildlife Management Areas (WMAs) are conservation areas managed by the New York State Department of Environmental Conservation (NYSDEC) primarily for the benefit of wildlife, and used extensively by the public for hunting, fishing, and trapping. As of 2016, the NYSDEC owns and maintains 113 WMAs, with a total area of approximately 197,000 acres. The Wildlife Management Areas program is administered by the Division of Fish, Wildlife and Marine Resources of the NYSDEC. 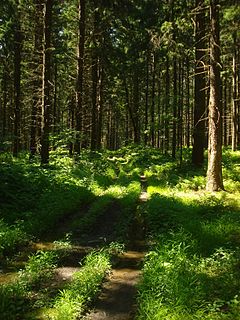 Joyce Wildlife Management Area is a 34,520 acres (13,970 ha) protected area in Tangipahoa, Parish, Louisiana, owned by the Louisiana Department of Wildlife and Fisheries. It is located 10 miles (16 km) south of Hammond, Louisiana and features a boardwalk leading into the swamps on the northwest corner.