The History Channel programme Most Extreme Airports ranks it as the second most extreme airport in the world. [3] The approach to the airport is considered to be one of the most difficult in the world to all aircraft, especially in inclement weather conditions.

Since the 19th century, the plains south of Tegucigalpa became known as the "Potrero Los Llanos", part of a farm adjoining the farm Loarque. In these areas, some political events took place. José Santos Guardiola defeated General José Trinidad Cabañas, seizing presidency of the republic. "El Llano" as it was known, is to the south end of Comayagüela. On a road to the south is the field that served for the takeoff and landing of aircraft. Currently, this forms the Hernán Acosta Mejía (HAM) Air Force base. The first landing was in 1921 when a single-engine plane from the Bristol Aeroplane Company landed with Captain Dean Ivan Lamb in command. He was received by President Rafael López Gutiérrez who broke a bottle of champagne on one of the aircraft's propellers.

The origin of the name Toncontín is unknown, but experts say that it is a word derived from the Nahuatl word "Tocotín", the name of an ancient and sacred dance of Yucatán in Mexico.

The civil war in 1924 caused President Tiburcio Carías Andino to realise that aviation had a great future in Honduras, providing an ideal transport solution for the mountainous country; as well as being a strategic military weapon. For these reasons and with the growth of commercial aviation and the emergence of the Honduran Air Force, General Tiburcio Carías, acquired the land that was to become Toncontín Airport in 1933. On January 5, 1934, the airport was inaugurated with the landing of a Douglas DC-3 from Pan American World Airways. Months later TACA opened "Hotel Toncontín" to accommodate passengers in transit, and Pan-Am built a hangar.

During the Football War of 1969, Toncontín was a major target for the Salvadoran Air Force, and was bombed on several occasions.

The airport received much notoriety as being one of the most dangerous in the world due to its proximity to mountainous terrain, its short runway, and its historically difficult approach to runway 02. [3] For years efforts have been made to replace it with Soto Cano airport in Comayagua, currently an airbase. Toncontín has, however, been significantly improved by the work of the Airport Corporation of Tegucigalpa (ACT) and InterAirports, a company contracted by the Honduran government to administer the country's four major airports.

Boeing 737-800s operated by Copa Airlines are the largest aircraft that normally land at Toncontín. Even with its recent runway extension, Toncontín's runway is still significantly shorter than that of most international airports. It is so short, in fact, that many aircraft seen by plane spotters are seen to be touching down on the displaced threshold of the runway, which by aviation law is not allowed to be landed on.

Toncontín International Airport has 4 gates (2 in the new terminal), a post office, a bank and bureau de change , many restaurants, and several airline lounges, as well as a duty-free shop, car rental services, and a first-aid room. The old terminal is undergoing renovation, and will be used for domestic flights in the future. The new terminal is now used for international flights.

Toncontín is also the home of the Aeroclub de Honduras (Honduran Air Club).

On May 30, 2008, the tragedy of TACA Flight 390 prompted the announcement by then Honduran President Manuel Zelaya that all large aircraft operations would move to the Soto Cano Air Base. This move would effectively move all international traffic from Toncontín, limiting its use to only domestic flights and small aircraft. [6]

The International Civil Aviation Organization (ICAO) completed a review of Toncontín and made safety recommendations regarding the airport. On June 25, 2008, President Zelaya reiterated his position of severely restricting international traffic to and from Toncontín and announced his intention to form a commission that would oversee implementing the safety recommendations of the ICAO report.[ citation needed ]

On July 8, 2008, President Zelaya announced the reopening of Toncontín airport at a news conference following a three-hour meeting with businessmen, who had demanded commercial flights resume at Toncontín due to Soto Cano Air Base being too far from Tegucigalpa. Zelaya reiterated that all commercial flights would eventually use the new airport at Soto Cano Air Base from 2009. This however, was canceled after Zelaya was removed from office on June 28, 2009, in the 2009 Honduran coup d'état. [7] International flights continue to operate to Toncontín.

Because of the terrain in Tegucigalpa, aircraft cannot easily be accommodated on a traditional straight-in approach for Runway 02, the most frequently used runway because of wind direction. Instead, an RNAV (GPS) approach is used, resembling a circle-to-land approach. Aircraft are routed through shallower terrain in a circular fashion, then follow along the Anillo Periferico road to a cloverleaf interchange, at which point aircraft take a sharp left turn to line up with runway 02. Until the partial demolition of the hillside, aircraft experienced limited ground clearance just before the threshold.

To maximize the amount of runway available, many aircraft land on the 350 metres (1,150 ft) displaced threshold, just before the actual 02 threshold. [22]

Departures from runway 02 must turn to a heading of 018 degrees and then climb swiftly to 9000 feet to avoid mountainous terrain just north of the airport. Because of the short length of the runway and the high altitude of the airport, aircraft require a large amount of power to do this, making late go-arounds potentially dangerous if not executed properly.

China Airlines Flight 642 was a flight that crashed at Hong Kong International Airport on 22 August 1999. It was operating from Bangkok to Taipei with a stopover in Hong Kong.

Avianca Costa Rica S.A., formerly known as LACSA, minority owned by the Synergy Group, is the national airline of Costa Rica and is based in San José. It operates international scheduled services to over 35 destinations in Central, North and South America. The airline previously used the TACA/LACSA moniker when it was a subsidiary of Grupo TACA. Since May 2013, following Avianca's purchase of Grupo TACA, Avianca Costa Rica became one of seven nationally branded airlines operated by Avianca Holdings group of Latin American airlines.

Aerolíneas Sosa is an airline based in La Ceiba, Honduras. It was established in 1976 and operates domestic scheduled services to 4 destinations from La Ceiba, as well as charter flights. Its main hub is Golosón International Airport, La Ceiba.

Soto Cano Air Base is a Honduran military base 5 mi (8.0 km) to the south of Comayagua in Honduras. It houses between 1,200 - 1,500 U.S. troops and is also used by the Honduran Air Force academy. The airbase became operational in 1940, changing the old location of the Honduras Air Force Academy in Toncontin, Tegucigalpa to Palmerola. It serves as one of the important bases to the US Military's presence in Central America.

Juan Manuel Gálvez International Airport is an international airport located on the island of Roatán, in the Caribbean Sea 50 kilometres (31 mi) off the northern coast of Honduras. Roatán is in the Bay Islands Department of Honduras.

TACA Flight 390 was a scheduled flight on May 30, 2008, by TACA Airlines from San Salvador, El Salvador, to Miami, Florida, United States, with intermediate stops at Tegucigalpa and San Pedro Sula in Honduras. In this hull loss/fatalities accident, the Airbus A320-233 overran the runway after landing at Tegucigalpa's Toncontín International Airport and rolled out into a street, crashing into an embankment and smashing several cars in the process.

Tan-Sahsa Flight 414 was a scheduled flight from Juan Santamaría International Airport, San José, Costa Rica to Toncontin Airport in Tegucigalpa, Honduras, with a stopover at Augusto C. Sandino Airport in Managua, Nicaragua on 21 October 1989. Flown with a Boeing 727-200, the flight crashed into a hill of the mountain range after the pilots failed to follow a special landing procedure required for the arrival to the airport, killing 131 passengers, leaving 15 survivors. 20 initially survived, but five died before treatment, due to a delay in rescue personnel from the bad weather. This accident is the deadliest accident in Central American history. 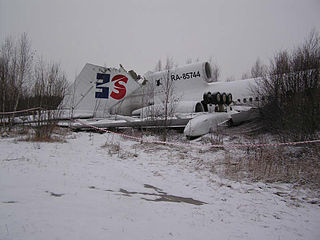 Dagestan Airlines Flight 372 was a scheduled commercial flight between Moscow's Vnukovo Airport and Makhachkala, Russia. On 4 December 2010, the Tupolev Tu-154 operating the flight skidded off the runway following an emergency landing at Domodedovo Airport, 45 km south-east of Vnukovo. Two people on board were killed. 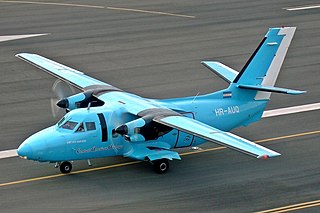 Central American Airways Flight 731 was a passenger flight which crashed on approach to Toncontín International Airport, Tegucigalpa, Honduras, on February 14, 2011. All 14 on board died. The aircraft involved, a Let L-410 Turbolet, was operating Central American Airlines' scheduled domestic service from San Pedro Sula to Tegucigalpa.

Central American Airways was an airline based in Honduras that was founded in 2008 and ceased operations in 2011 after a crash that killed 14 people. It is not to be confused with the charter airline and fixed-base operator of the same name that is based at Bowman Field in Louisville, Kentucky.

EasySky is a low-cost airline based in Honduras. Its head office is located in Tegucigalpa, and since 2015, its primary operational base is at Toncontín International Airport in Tegucigalpa.

Transportes Aéreos Nacionales SA, also known as TAN Airlines, was a Honduran airline, headquartered at the Edificio TAN in Tegucigalpa. The carrier was set up in 1947 and merged into SAHSA, another Honduran airline, in November 1991.

Dirección General de Aeronáutica Civil (DGAC), in English the General Directorate of Civil Aeronautics, is the civil aviation authority of Honduras. The headquarters is in Tegucigalpa.

Útila Airport is an airport serving Útila, Islas de la Bahía, Honduras. It handles regional and international air traffic for the town of Útila. The airport is served by several airlines on a daily schedule, as well as numerous private and charter flights.