Tone Irén Liljeroth (born 19 March 1975) is a Norwegian politician for the Progress Party.

He served as a deputy representative to the Parliament of Norway from Akershus during the term 2009–2013. [1] She is also a member of Skedsmo municipal council.

É, é (e-acute) is a letter of the Latin alphabet. It is found in Afrikaans, Catalan, Czech, Danish, Dutch, Emilian-Romagnol, French, English, Galician, Hungarian, Icelandic, Irish, Italian, Kashubian, Luxembourgish, Occitan, Navajo, Norwegian, Portuguese, Slovak, Spanish, Swedish, Vietnamese, and Welsh languages, as a variant of the letter "e". In English, it may be observed as a pronunciation aid in loanwords in highly formal writing or romanizations but not usually in casual writing or even in some formal writing types. This is also the case in the Dutch and Navajo languages.

Ò, ò (o-grave) is a letter of the Latin script.

Trøndersk (Urban East Norwegian: [ˈtrœ̀ndəʂk], also known as trøndermål, trøndsk and trønder, is a Norwegian dialect, or rather a group of several sub-dialects. As is the case with all Norwegian dialects, it has no standardised orthography, and its users write either Bokmål, or in the case of 0.6% Nynorsk.

Jan Gunnarsson is a former tennis player from Sweden, who won one singles in Vienna in 1985 and nine doubles titles on the world tour during his professional career. In 1989 he reached the semi-finals of Australian Open where he lost in straight sets to Miloslav Mečíř. 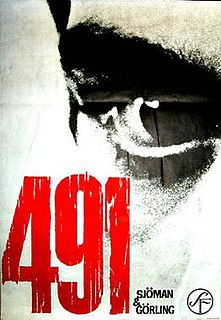 491 is a 1964 Swedish black-and-white drama film directed by Vilgot Sjöman, based on a novel by Lars Görling. The story is about a group of youth criminals who are chosen to participate in a social experiment, where they are assigned to live together in an apartment while being supervised by two forgiving social workers. The tagline is: It is written that 490 times you can sin and be forgiven. This motion picture is about the 491st.

Lena Elisabeth Adelsohn Liljeroth is a Swedish politician who served as Minister for Culture and Sports from 2006 to 2014. A member of the Moderate Party, she was an MP of the Swedish Riksdag from 2002 to 2014.

Nordischer Klang is the largest festival of Nordic culture in Germany. It is a major platform for artists from Denmark, Finland, Iceland, Norway, and Sweden in Germany. The festival takes place in the town of Greifswald, which is situated about 200 km to the north of Germany's capital Berlin at the Baltic shore.

Tone Damli Aaberge is a Norwegian singer-songwriter and actress. She became famous for being a contestant in the Norwegian version of the Idol series.

Tone Merete Sønsterud is a Norwegian trade union leader and politician who represents the Arbeiderpartiet. She is deputy leader of LO Stat, and the Arbeiderpartiet's fourth candidate from Hedmark at the 2009 Norwegian parliamentary election, and he lives in Kongsvinger. She was deputy representative for the Stortinget 2001-05 and from 2005–09 and has attended for longer.

Tone Hødnebø is a Norwegian poet, translator and magazine editor.

Roseanna is a 1967 Swedish detective film directed by Hans Abramson. It is based on the 1965 novel Roseanna by Swedish writers Maj Sjöwall and Per Wahlöö about fictional Swedish police detective Martin Beck. 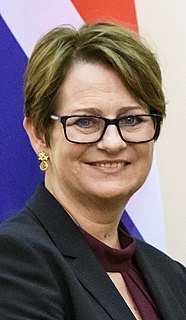 Tone Wilhelmsen Trøen is a Norwegian politician from the Conservative Party who is a member of the Storting and the current President of the Storting.

Norway–Spain relations are the bilateral and diplomatic relations between these two countries. Norway has an embassy in Madrid, and honorary consulates in Algeciras, Barcelona, Benidorm, Bilbao, Gijón, Gerona, La Coruña, Las Palmas de Gran Canaria, Málaga, Palma de Mallorca, Sevilla, Santa Cruz de Tenerife, Torrevieja and Valencia. Spain has an embassy in Oslo, also accredited for Iceland. Relations between Spain and Norway are mainly defined by their membership in NATO. The Norwegian ambassador, Johan Vibe, classified relations between Spain and Norway as excellent, very close and cordial. In addition, there is a strong mutual interest in commerce, tourism, culture and history between the two countries. The Princess Foundation Christina of Norway was created to strengthen Spanish-Norwegian relations.

Tone, Tóne or Þone is a given name, nickname and a surname. Tone is a Slovene masculine given name in use as a short form of Anton in Slovenia. It is also a Danish, Finnish, Norwegian and Swedish feminine given name used as an alternate form of Torny and a short form of Antona in Norway, Sweden, Finland, Republic of Karelia, Estonia, Greenland and Denmark. Tóne is a Portuguese masculine given name in use as a diminutive of Antônio and António in Portugal, Brazil, South Africa, Namibia, Angola and Mozambique. Þone is an Old Norse feminine given name that is used as a form of Torny in parts of Norway, Sweden, Iceland, France, England and Scotland as well as in Denmark.