Tonestus graniticus, common names granite serpentweed [2] and Lone Mountain serpentweed, is a rare endemic plant species known only from the east side of Lone Mountain in Esmeralda County, Nevada, about 20 km (12.5 miles) west of Tonopah. [3] It grows there in the crevices of granitic outcrops. [4] 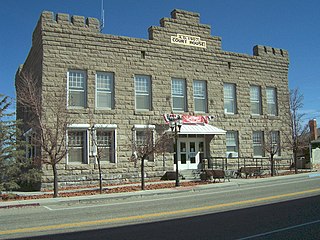 Esmeralda County is a county in the west of U.S. state of Nevada. As of the 2010 census, the population was 783, making it the least populous county in Nevada. Esmeralda County does not have any incorporated communities. Its county seat is the town of Goldfield. 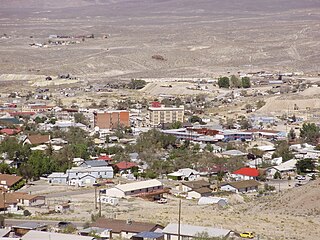 Tonestus graniticus is a perennial herb growing close to the ground and forming mats. Leaves are ovate to spatulate, irregularly toothed, up to 4 cm (1.6 inches) long. Flower heads are born in racemose or corymbiform arrays. There are no ray flowers, but up to 23 yellow disc flowers. [5] [6] [7]

Corymb is a botanical term for an inflorescence with the flowers growing in such a fashion that the outermost are born on longer pedicels than the inner, bringing all flowers up to a common level. A cyme has a flattish top superficially resembling an umbel, and may have a branching structure similar to a panicle. Flowers in a corymb structure can either be parallel, or alternate, and form in either a convex, or flat form.

Ionactis, common name stiff-leaved Asters or ankle-asters, is a small genus of plants belonging to the daisy family. These aster-like plants are endemic to North America. One species is widespread across much of the eastern half of the continent, while two others are rare endemics with very restricted ranges.

Allium cernuum, known as nodding onion or lady's leek, is a perennial plant in the genus Allium. It grows in dry woods, rock outcroppings, and prairies. It has been reported from much of the United States, Canada and Mexico including in the Appalachian Mountains from Alabama to New York State, the Great Lakes Region, the Ohio and Tennessee River Valleys, the Ozarks of Arkansas and Missouri, and the Rocky and Cascade Mountains of the West, from Mexico to Washington. It has not been reported from California, Nevada, Florida, Louisiana, Mississippi, New Jersey, Delaware, New England, or much of the Great Plains. In Canada, it grows from Ontario to British Columbia.

Allium acuminatum, also known as the tapertip onion or Hooker's onion, a species in the genus Allium and is native to the Western United States and Canada. It has been reported from every state west of the Rocky Mountains, plus British Columbia.

Wislizenia refracta, common names jackass-clover or spectacle fruit, is one of the three recognized species in its genus Wislizenia, although some authors have suggested considering them as subspecies. Wislizenia refracta is native to northwestern Mexico and the southwestern United States. It has been reported from Chihuahua, Sonora, trans-Pecos Texas, New Mexico, Arizona, Utah, Nevada and from California. The species occurs in sandy flats, in desert scrub, and on disturbed sites such as roadsides.

Allium atrorubens is a species of wild onion known by the common name dark red onion. This plant is native to the southwestern United States where it grows in the sandy soils of the Mojave Desert, the Great Basin and higher-elevation deserts in Nevada, eastern California southwestern Utah, northwestern Arizona. 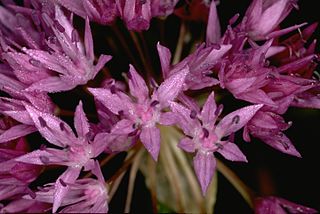 Allium lemmonii is a species of wild onion known by the common name Lemmon's onion, named for botanist John Gill Lemmon (1831–1908). It is native to the western United States, at elevations of 1200–1900 m in the Great Basin of Utah, Nevada, northern and eastern California, eastern Oregon, southwestern Idaho.

Allium punctum is a species of wild onion known by the common name dotted onion or Modoc onion. It is native to the western United States in and around the Modoc Plateau in northeastern California, northwestern Nevada, and southeastern Oregon. It is uncommon, growing volcanic flatlands created by old lava flows.

Toiyabea is a genus of North American plants in the aster tribe within the daisy family. The genus is named for the Toiyabe Mountains in the US state of Nevada. The only known species is Toiyabea alpina, the alpine serpentweed, native to the Toiyabe and Toquima Mountains of central Nevada.

Tonestus, common name serpentweed, is a genus of North American flowering plants in the aster family.

Tonestus eximius is a species of flowering plant in the aster family known by the common names Lake Tahoe serpentweed and Tahoe tonestus. It is native to the High Sierra Nevada, where it is known only from the vicinity of Lake Tahoe on the California-Nevada border. It grows in alpine and subalpine mountain habitat. It is a short, clumpy perennial herb growing up to 13 centimeters tall. The thick stems are hairless and glandular, the lower parts covered in the withered leaf bases of previous seasons' growth. The toothed or serrated leaf blades are up to 3 to 5 centimeters in length. The inflorescence is a single flower head or a cluster of a few heads. Each is 1 to 1.5 centimeters wide with green phyllaries. The head bears at least 10 bright yellow ray florets around a center containing many tubular disc florets. 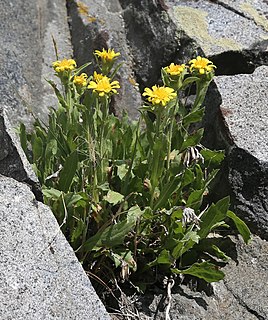 Gnaphalium exilifolium, the slender cudweed, is a plant species native to the western United States and northern Mexico. It grows in hilly and mountainous regions in the Black Hills, Rocky Mountains, and other ranges from the states of Chihuahua, Colorado, Kansas, South Dakota, Wyoming, Arizona, New Mexico and Utah. It grows in moist locations such as lake shores, stream banks, moist meadows, etc., at elevations of 1,400–3,000 m (4,600–9,800 ft).

Solidago puberula, the downy goldenrod, is a plant species native to eastern North America from Nova Scotia and Ontario south to Florida and Louisiana. Two subspecies are commonly recognized:

Caulanthus barnebyi, the Black Rock wild cabbage, is a plant species endemic to a small region in the US State of Nevada. It is known only from the Black Rock Mountains in Humboldt and Pershing Counties in the northwestern part of the state. It grows on dry, rocky slopes and outcrops at elevations of 4,300–4,900 feet (1,300–1,500 m).

Descurainia paradisa is a plant species native to eastern and northern California, southeastern Oregon, Box Elder County in northwestern Utah, and most of Nevada. It grows in shrub communities at elevations of 3,300–7,500 feet (1,000–2,300 m).

Thelypodium laxiflorum, the droopflower thelypody, is a plant species native to the southwestern United States. It grows in open, rocky places on slopes and cliff faces, usually in pinyon-juniper woodlands at elevations of 4,900–10,200 feet (1,500–3,100 m). It has been reported from Utah, western Colorado, southern Nevada, northwestern Arizona, and northwestern New Mexico.

Allium brandegeei is a plant species native to the western United States. It has been reported from western Colorado, Utah, Idaho, eastern Oregon, Park County, Montana and Elko County, Nevada.

Allium simillimum, the Simil Onion, or dwarf onion, is a plant species native to Idaho and Montana. It grows on sandy soils at high elevations in the mountains, 1800–3400 m.

Herrickia kingii is a North American species of flowering plants in the aster family, called the King's serpentweed or King's aster. It has been found only in the State of Utah in the western United States.