Tonfön Television is a Tongan pay TV service commencing in 2002, offering seven 24-hour channels of movies, news, sport and entertainment. Among the channels available are ABC Asia Pacific, BBC World, Fox News, in addition to four locally programmed channels, which include a sports channel, a family channel, a documentary/current affairs channel, and a movie channel.

Fox News is an American pay television conservative news channel owned by the Fox News Group, a division of the Fox Corporation. The channel broadcasts primarily from studios at 1211 Avenue of the Americas in New York City. Fox News is provided in 86 countries or overseas territories worldwide, with international broadcasts featuring Fox Extra segments during ad breaks.

Since November 2005, Tonfön TV has found itself facing stiff competition from a rival pay TV company, Sky Pacific, which offers more channels and a wider variety of programming to Tongan viewers.

SKY Pacific is a Fiji based pay TV service formerly owned by Fiji Television Limited delivering encrypted signals of 25 channels via direct-to-home (DTH) satellite on C-band to subscribers in Fiji and across the South Pacific. It is headquartered in the capital city of Fiji, Suva City with branch offices in Suva, Lautoka, Nadi and Labasa. On April 1, 2016, Digicel Fiji officially acquired the company.

BBC America is an American pay television network that is jointly owned by BBC Studios and AMC Networks.

Antenna, better known as ANT1, is a television network airing in Greece and Cyprus. The alternate spelling is play on words in Greek; ena (ένα) is the Greek number 1 (one), thus ANT1 is pronounced the same as Antenna (Αντέννα).

FX is an American channel based in Los Angeles, California, that is owned by 21st Century Fox and FX Networks, LLC. Originally launched on June 1, 1994, the network's original programming aspired to the standards of premium cable channels such as HBO, Showtime, and Starz in regard to themes and content, higher-quality writing, directing, acting, and sister channels such as FXX and FXM. FX also carries reruns of theatrical films and broadcast-network sitcoms, and advertising-free content is available through the FX+ premium subscription service.

Free-to-air (FTA) are television (TV) and radio services broadcast in clear (unencrypted) form, allowing any person with the appropriate receiving equipment to receive the signal and view or listen to the content without requiring a subscription, other ongoing cost or one-off fee. In the traditional sense, this is carried on terrestrial radio signals and received with an antenna.

Fox Networks Group Asia Pacific Limited is a Hong Kong-based commercial broadcasting company which is currently a part of 21st Century Fox's Fox Networks Group, operating multiple specialty television channels. It was previously traded as Star TV until 2001, and simply as Star until 2009. Originally established by Hutchison Whampoa and later acquired by the original News Corporation, Star TV was once the prominent satellite television broadcaster in the entire Asia.

Travel Channel is an American pay television channel that is owned by Discovery, Inc., which had previously owned the channel from 1997 to 2007. The channel is headquartered in Chevy Chase, Maryland, United States.

In Demand is an American cable television service which provides video on demand services, including pay-per-view. Comcast, Cox Communications, and Charter jointly own iN DEMAND.

RCTI is an Indonesian free-to-air television network based in West Jakarta. Its programming consists of news bulletins, sports events and soap operas.

Now TV is a pay-TV service provider in Hong Kong operated by PCCW Media Limited, a wholly owned subsidiary of PCCW. It provides 197 TV channels including 176 channels branded under now TV, 21 channels from TVB Network Vision, and over 30 video on demand categories. Launched on 26 September 2003, its TV signal is transmitted with IPTV technology through HKT's fixed broadband network.

Hong Kong Cable Television Limited, formerly known as Wharf Cable Television Limited until 31 October 1998, is a cable television provider in Hong Kong currently owned by Forever Top (Asia) Limited, which operates it as a part of i-Cable Communications business. It is the second company to provide a cable television service in Hong Kong. It was incorporated on 1 January 1992 and officially inaugurated on 31 October 1993, offering a broad range of information and entertainment to its viewers through over 100 pay television channels, of which 54 are directly operated by the company.

A timeshift channel is a television channel carrying a time-delayed rebroadcast of its "parent" channel's programming. This channel runs alongside their parent: the term "timeshift" does not refer to a network broadcasting at a later time to reflect a local time zone, unless the parent is also available. Often the timeshift channel's branding and advertising will be the same as that of the parent, with the channel number and respective timing being the only distinction between the two, but some, such as Channel 4 +1 in the United Kingdom and TVNZ 1+1 in New Zealand, will overlay a different digital on-screen graphic to distinguish the two channels. A few channels, like Film4 +1 in the United Kingdom, do not carry a digital on-screen graphic on its regular channel or its timeshift channel. 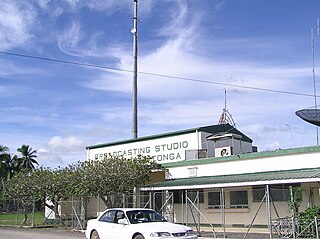 Television Tonga is a Tongan television channel operated by the Tonga Broadcasting Commission. It was founded on July 4, 2000 by King Taufa'ahau Tupou IV.

Tonfön is a Tongan telecommunications company, founded in 2002 by its chairman, Tupoutoʻa. It operates as a division of the Shoreline Group of Companies. The trema on the second 'o' is not pronounced, but is purely for effect.

Pacific Broadcasting Services is a company jointly owned by City West Centre Broadcasting Services and BPHCL. Its core business is to deliver satellite subscription television and radio broadcasting services to the Fiji Islands and surrounding markets, focussing on both Hindi and English speaking households and commercial outlets.

RCN Nuestra Tele Internacional is a pay television channel owned by Colombian television network RCN. It is a Spanish-language network aimed to Colombian and Latin American viewers around the world. It broadcasts television programs produced by RCN Televisión, most of them previously aired in this network in Colombia, and a few other shows from other companies, along with the Colombian First Football Division. It is broadcast in Australia and New Zealand via UBI World TV. DirecTV added the channel on 28 April 2010.

DZRH News Television is a Philippine free-to-air television news channel owned by Manila Broadcasting Company. Its programs are primarily from MBC's flagship radio station DZRH and station-produced programs, occupied by the timeslots of radio dramas and other programs of DZRH.

Aksyon TV is a former Philippine commercial broadcast television network, and currently an international pay television channel. It was a joint venture of Nation Broadcasting Corporation and TV5 Network, Inc., both under PLDT media arm MediaQuest Holdings. Its programs were primarily produced by TV5's divisions News5 and ESPN5. AksyonTV formerly broadcasts terrestrially through DWNB-TV in Metro Manila, as well as on UHF channel 29 in Cebu, Davao and other relay stations, and on a digital subchannel via channel 5.2 in Metro Manila. It occupies the frequency previously used by MTV Philippines, a subsidiary of MTV Networks Asia Pacific until 2006.