Tong Ren Tang (TRT; Chinese :同仁堂) is a Chinese pharmaceutical company founded in 1669, which is now the largest producer of traditional Chinese medicine (TCM). The company is headquartered in Beijing, and is engaged in both manufacture and retail sales, operating drug stores predominantly in Chinese-speaking regions. Tong Ren Tang is considered one of the "Big 4" traditional Chinese medicine brands still in existence. The four companies include (listed in order of age not size): Guangyuyuan (1541 AD), Guangzhou Chen Liji (1600 AD), Beijing Tong Ren Tang (1669), and Hangzhou Hu Qing Yu Tang (1874). Tong Ren Tang and GuangYuYuan have been officially recognized as "China Time-Honored Brands" by the Ministry of Commerce of the People's Republic of China. [2]

In 1669, the eighth year of the reign of the Kangxi Emperor in the Qing dynasty (1644-1911), Tong Ren Tang was established in Beijing by Yue Xianyang who served as a senior physician at the Qing imperial court. In 1702, the company relocated within Beijing to the address from which it has operated ever since. In 1723, Tong Ren Tang was appointed the sole supplier of herbal medicines to the imperial court by the Yongzheng Emperor and remained in that position until the collapse of the Qing dynasty in 1911. In 1924, the company Tiger bone wine was awarded at the Leipzig Trade Fair, making the product the most popular type in commerce. [3]

Like many older Chinese companies, Tong Ren Tang has struggled to adapt to market changes. In recent years, Tong Ren Tang has modernized its facilities, and changed its trade name to Tongrentang. It remains one of the oldest surviving brand names for traditional Chinese medicine, and has wide name-recognition among Chinese and Asians worldwide. It is also one of the world's largest TCM companies, with products sold in countries all over the world.

In 2001, Tong Ren Tang, in collaboration with Germany-based Mirahi Biotech, diversified into skincare products. Using state-of-the-art western technologies and the vast cache of herbal medicines of Tong Ren Tang, the collaboration has come up with an impressive list of products. In 2008, the exclusive U.S. distributorship is licensed to a California corporation, Denosim Incorporated, and the products are being distributed by MIRAHI Skincare, Inc., San Jose, California, USA.

In 2004, Tong Ren Tang invested 150 million Hong Kong dollars in the construction of a manufacturing plant in Hong Kong.

In October 2007, Tong Ren Tang and an American company called Greater China Corporation jointly announced the formation of a partnership under the name Tong Ren Tang Wellness Corporation to "develop spa-like wellness centers that will provide treatments and products based upon China's famous TongRenTang herbal medicines. These will include acupuncture, massage, acupressure, Tuina, T'ai chi, Qigong, reflexology and many other oriental treatments as well as a full line of herbal foods and health products". [7]

In 2020, the company began to expand into a chain coffee business, which turned part of the drugstore into a coffee shop, selling coffee and milk tea with herbs. This business is called "ZhiMa Health". The company aims to attract young consumers back to the traditional Chinese medicine market through Zhima Health. [8] This service is only available in Beijing for the time being.

Tongrentang's products are often counterfeited both inside and outside China. China's Ministry of Commerce notes that "Tongrentang...and others have had their names and brands illegally registered by other Chinese and overseas manufacturers, resulting in a predicament in exports, multinational exchanges and potential economic losses." [9] [ deprecated source ] 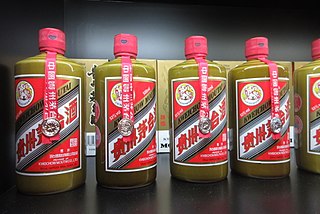 Maotai or Moutai is a brand of baijiu, a distilled Chinese liquor (spirit), made in the town of Maotai in China's Guizhou province. Produced by the state-owned Kweichow Moutai Company, the beverage is distilled from fermented sorghum and now comes in several different varieties.

Xinhui, alternately romanized as Sunwui and also known as Kuixiang, is an urban district of Jiangmen in Guangdong, China. It grew from a separate city founded at the confluence of the Tan and West Rivers. It has a population of about 735,500, 98% of whom are Han Chinese but many of whom speak a dialect of Cantonese as their first language. Xinhui is best known in China for its chenpi, a kind of dried Mandarin orange peel.

Baijiu, also known as shaojiu (烧酒/燒酒), is a Chinese clear, colourless liquor typically coming in between 35% and 60% alcohol by volume (ABV). Each type of baijiu uses a distinct type of Qū for fermentation unique to the distillery for the distinct and characteristic flavour profile. 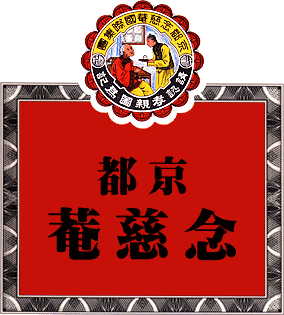 Liwan District is one of 11 urban districts of the prefecture-level city of Guangzhou, the capital of Guangdong Province, China. The district is split into two parts by the Pearl River: Xiguan in the northeast and Fangcun in the southwest.

Chenpi, chen pi, or chimpi is sun-dried tangerine peel used as a traditional seasoning in Chinese cooking and traditional medicine. It is aged by storing them dry. The taste is first slightly sweet, but the aftertaste is pungent and bitter. According to Chinese herbology, its attribute is warm. Chenpi has a common name, ‘ju pi’ or mandarin orange peel.

Master Kong is the largest instant noodle producer in China. 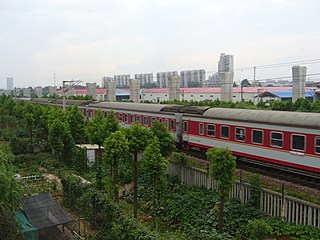 Hu Qingyu Tang is a historically significant Chinese pharmaceutical company. It is as well known as a Tongrentang in Beijing.

Bayankala is a natural skincare brand originating from Shanghai, China, that was conceived of by a French entrepreneur and long-time resident and "old China hand", Jean Zimmermann. Zimmermann founded the brand together with a Chinese herbalist. The inspiration for the brand came during his time as General Manager of Lane Crawford department stores in China when he decided to create a high-end Chinese brand.

Global Brands Group Holding Limited is a branded apparel, footwear and brand management company. It designs, develops, markets and sells products under a diverse array of owned and licensed brands and a wide range of product categories on a global scale.

Guangyuyuan, founded in 1541, is one of the oldest traditional Chinese medicine brands still in existence. The brand offers a wide range of medicinal products that can be classified into 8 categories: soft and hard capsules, pills, granules, powders, syrups, creams, and health wine. Its headquarters are located in the historic Qianmen area of Beijing which is within walking distance of Tiananmen Square. Guangyuyuan is listed on the Shanghai Stock Exchange under the name Guangyuyuan Chinese Herbal Medicine Co. Ltd. stock number 600771.

Inoherb is a Chinese skincare brand which originated from Shanghai, China and was conceived by a traditional Chinese medicine doctor who was deeply influenced by Chinese medicine since her childhood. The brand targets young consumers with herbal skin care products which including whitening, moisturizing, oil control, sunscreen, men and many other categories.