The Tong Ren Tower is a building in Nanjing, Jiangsu, China. It is 186 meters (610 ft) tall with 53 floors. [1] Construction began in 2003 and ended in 2007. The building was designed by P & T Architects & Engineers Ltd. A 68 storey building design for this site was cancelled in 1996. [2] However, it was redesigned and that resulted in its approval. The building is used for offices.

The Porcelain Tower of Nanjing, part of the former Great Bao'en Temple, is a historical site located on the south bank of external Qinhuai River in Nanjing, China. It was a pagoda constructed in the 15th century during the Ming dynasty, but was mostly destroyed in the 19th century during the course of the Taiping Rebellion. A modern life size replica of it now exists in Nanjing. 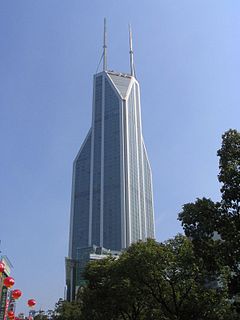 Emporis GmbH is a real estate data mining company with headquarters in Hamburg, Germany. The company collects and publishes data and photographs of buildings worldwide.

New Century Plaza is a tower complex located in Nanjing, China. Tower A, the main building, is a 255.2 meter (837 foot) tall skyscraper. 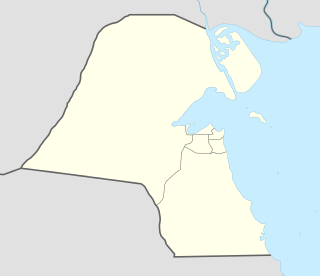 The Al Hamra Tower is a skyscraper in Kuwait City, Kuwait. It is the tallest building in Kuwait.

Zifeng Tower is a 450-meter (1,480 ft) supertall skyscraper in Nanjing, Jiangsu. The 89-story building completed in 2010 comprises of retail and office space up to floor 41. Floors 49-71 feature a hotel, numerous restaurants, and a public observatory on the 72 floor. The tower’s stepping is functional, helping to separate these sections. The building is currently the tallest in Nanjing and Jiangsu province, the sixth tallest in China and the twentieth tallest in the world.

Bank of China Building is the second tallest building in Macau, China. At 38 floors and 163 metres (535 ft) tall, it was designed by P&T Architects & Engineers Ltd and it is home to the Bank of China operations in Macau. The construction of the building started in 1989 and was completed in 1991.

One Lujiazui, previously known as Development Tower, is a skyscraper in Shanghai, China. It is the 9th tallest building in Shanghai. Finished in 2008, the tower stands 269 metres tall. The glass highrise's primary use is as an office building, though it also offers over 6,000 square metres of residential space. One Lujiazui is located near the Lujiazui Central Park, by the Huangpu River. 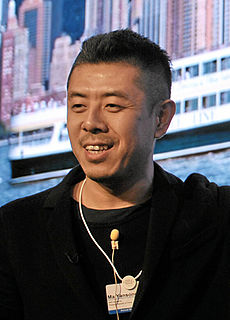 Sheraton Huzhou Hot Spring Resort is a luxury hotel and resort located in Huzhou, China. It has nicknames such as "Horseshoe Hotel" and "Doughnut Hotel" due to its Torus geometrical shape. The horseshoe-shaped hotel, 27-story structure lies on Lake Tai between Nanjing and Shanghai. The 4½-star resort has 321 rooms, 37 villas, 40 suites, a presidential suite, parking facilities, fitness & wellness center, four restaurants, a café, a children's pool, and rooms with terraces. The design was conceived by architect Yansong Ma and constructed by the Shanghai Feizhou Group. It belongs to the Sheraton Hotels and Resorts chain of Starwood Hotels and Resorts Worldwide. Completed in 2013, the building was awarded 3rd place from the Emporis Skyscraper Awards,, citing it as the third best "new skyscraper for design and functionality" completed that year.

Nanjing Olympic Suning Tower is a skyscraper under construction in Nanjing, Jiangsu, China. It was expected to be completed in 2017 but is currently on hold. The building site was near to Nanjing Olympic Sports Centre.

Nanjing World Trade Center Tower 1 is a supertall skyscraper under construction in Nanjing, Jiangsu, China. It will be 328 meters (1,076.1 ft) tall. Construction started in 2011 and is expected to be completed in 2019.

Tianjin Modern City Office Tower is a supertall skyscraper in Tianjin, China. It is 338 metres (1,109 ft) tall. It was first proposed in 2010. Construction began in 2011 and ended in 2016. The tower is a part of a set of two towers with the other tower being 205 m (673 ft) tall. The secondary tower is used primarily as a hotel and luxury apartments.