Tong sui (literally translated as "sugar water"), also known as tim tong, is a collective term for any sweet, warm soup or custard served as a dessert at the end of a meal in Cantonese cuisine. [1] Tong sui are a Cantonese specialty and many varieties are rarely found in other regional cuisines of China. [2] Outside of Cantonese-speaking communities, soupy desserts generally are not recognized as a distinct category, and the term tong sui is not used.

In Hong Kong, Macao and Malaysia, a large variety of tong sui is served in tong sui specialty stores. Tong sui stores have also gained prominence in overseas Chinese communities, and are found in various parts of Canada, Australia and the United States.

During the 1980s to 1990s, Hong Kong’s economy developed rapidly and living standards rose. Western desserts and sweet soups were imported to Hong Kong by Western hotels or cooks who had studied in the West. Under Western influence, people started using fresh fruits to create new-style tong sui such as tapioca pudding. Many Chinese herbal tea shops like Hui Lau Shan transformed into tong sui shops. [3]

In the 21st century, chain tong sui shops have become more prominent and recommended as tourist attractions by The Hong Kong Tourism Board. 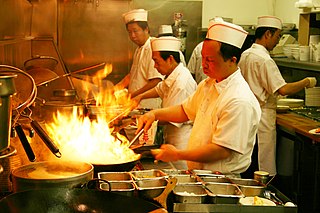 Cantonese or Yue cuisine is the cuisine of the Guangdong province of China, particularly the provincial capital, Guangzhou, and the surrounding regions in the Pearl River Delta, including Hong Kong and Macau. Strictly speaking, Cantonese cuisine is the cuisine of Guangzhou or of Cantonese speakers, but it often includes the cooking styles of all the speakers of Yue Chinese languages in Guangdong. On the other hand, Teochew and Hakka cuisine have their own character, as does Guangxi cuisine, though they are all considered culturally Cantonese. Cantonese cuisine is one of the Eight Culinary Traditions of Chinese cuisine. Its prominence outside China is due to the large number of Cantonese emigrants. Chefs trained in Cantonese cuisine are highly sought after throughout China. Until the late 20th century, most Chinese restaurants in the West served largely Cantonese dishes.

Dessert is a course that concludes a meal. The course usually consists of sweet foods, such as confections, and possibly a beverage such as dessert wine or liqueur; however, in the United States it may include coffee, cheeses, nuts, or other savory items regarded as a separate course elsewhere. In some parts of the world, such as much of central and western Africa, and most parts of China and India, there is no tradition of a dessert course to conclude a meal. 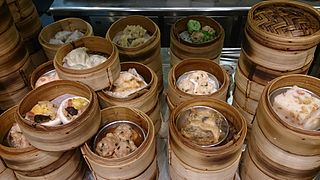 Dim sum is a large range of small dishes that Cantonese people traditionally enjoy in restaurants for breakfast and lunch. The city of Guangzhou experienced an increase in commercial travel in the tenth century and travellers stopped at teahouses for frequent, small-portion meals with tea called yum cha, or "drink tea" meals. Yum cha includes two related concepts. The first is 盅兩件, which translates literally as "one cup, two pieces". This refers to the custom of serving teahouse customers two pieces of delicately made food items, savory or sweet, to complement their tea. The second is 點心, which means dim sum and translates literally to "touch heart", the term used to designate the small food items that accompanied the tea drinking.

Hong dou tang or red bean soup is a popular Chinese dish served in Mainland China, Hong Kong, and Taiwan. It is categorized as a tang shui 糖水 or sweet soup. It is often served cold during the summer, and hot in the winter. Leftover red bean soup can also be frozen to make ice pops and is a popular dessert.

Youtiao, is a long golden-brown deep-fried strip of dough commonly eaten in China and in other East and Southeast Asian cuisines. Conventionally, youtiao are lightly salted and made so they can be torn lengthwise in two. Youtiao are normally eaten at breakfast as an accompaniment for rice congee, soy milk or regular milk blended with sugar. Youtiao may be known elsewhere as Chinese cruller, Chinese fried churro, Chinese oil stick, Chinese doughnut, Chinese breadstick, and fried breadstick, 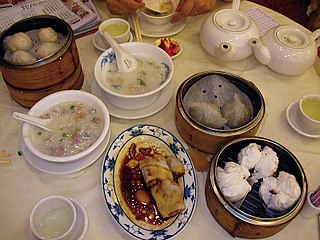 Tangyuan or tang yuan is a Chinese dessert that is a ball of glutinous rice flour and water that has been either boiled and served in a hot broth or syrup or else deep-fried. Tangyuan can be either small or large and filled or unfilled. They are traditionally eaten during Yuanxiao in the Lantern Festival, but also served as a dessert on a Chinese wedding day, Winter Solstice Festival, and any occasions such as a family reunion, because of a homophone for union. 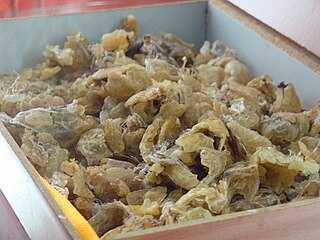 Hasma is a Chinese and widely Central Asian dessert ingredient made from the dried fatty tissue found near the fallopian tubes of true frogs, typically the Asiatic grass frog. Because of its whitish appearance, hasma is often mistakenly described as "snow frog fat". The Western pharmaceutical term is Oviductus Ranae. Hasma is relatively expensive, so it is reserved for special occasions and high-end restaurants

Black sesame soup is a popular east-Asian and Chinese dessert widely available throughout China, Vietnam, Taiwan, Hong Kong, Malaysia and Singapore. It is typically served hot. In Cantonese cuisine it takes the form of tong sui, or sweet soup, with greater viscosity. The main ingredients are black sesame seeds, rice and water. Sugar is added for sweetness. Tangyuan is sometimes added into black sesame soup. Black sesame soup can be purchased in powder form.

Ching bo leung is a sweet, cold soup of Chinese origin and commonly served in Cantonese cuisine, Hainanese cuisine and Guangxi cuisine. It is a type of tong sui. It is known as sâm bổ lượng or chè sâm bổ lượng in Vietnam.

Chè is any traditional Vietnamese sweet beverage, dessert soup or pudding. Varieties of Chè are made with mung beans, black-eyed peas, kidney beans, tapioca, jelly, fruit, and coconut cream. Other types are made with ingredients such as salt, aloe vera, seaweed, lotus seed, sesame seed, sugar palm seeds, taro, cassava and pandan leaf extract. Some varieties, such as chè trôi nước, may also include dumplings. Chè are often prepared with one of a number of varieties of beans, tubers, and/or glutinous rice, cooked in water and sweetened with sugar. In southern Vietnam, chè are often garnished with coconut creme. 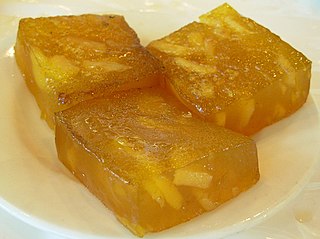 Chinese desserts are sweet foods and dishes that are served with tea, along with meals or at the end of meals in Chinese cuisine. The desserts encompass a wide variety of ingredients commonly used in East Asian cuisines such as powdered or whole glutinous rice, sweet bean pastes, and agar. Due to the many Chinese cultures and the long history of China, there are a great variety of desserts of many forms.

Bing sutt is a type of traditional cold drinking house started in Guangzhou (Canton) and refreshed in Hong Kong. These bing sutts are commonly founded between 1950s and 1960s. They are characterized by old furniture and settings such as the small tiled floors, hanging fans, folding chairs and so on. A bing sutt provides light meals and drinks and is neighbourhood-oriented. It is believed to be the predecessor of the cha chaan teng.

Red bean paste or red bean jam, also called adzuki bean paste or anko, is a paste made of red beans, used in East Asian cuisine. The paste is prepared by boiling the beans, then mashing or grinding them. At this stage, the paste can be sweetened or left as it is. The color of the paste is usually dark red, which comes from the husk of the beans. In Korean cuisine, the azuki beans can also be husked prior to cooking, resulting in a white paste. It is also possible to remove the husk by sieving after cooking, but before sweetening, resulting in a red paste that is smoother and more homogeneous.

Tong but lut is a Cantonese dessert. Glutinous rice flour balls in sugar syrup are sprinkled with crushed roasted peanuts. The stickiness of the balls prevents the topping from coming off, hence the name.