Tonga Cable System is a submarine cable system connecting Tonga with Fiji. [1] It is 827 kilometres (514 mi) long. [1] It has cable landing points at Sopu Tonga and Suva Fiji. [1] The project is funded by Asian Development Bank [2] and the World Bank. [3]

On January 20 2019 the fibre optic cable broke and disrupted Internet to Tonga. Satellite communications was used as backup. [4]

Telecommunications in Tuvalu cover Tuvalu's 6 atolls and 3 reef islands. The islands of Tuvalu rely on satellite dishes for communication and internet access.

TAT-14 is the 14th consortium transatlantic telecommunications cable system. In operation from 2001, it uses wavelength division multiplexing. The cable system is built from multiple pairs of fibres—one fibre in each pair is used for data carried in one direction and the other in the opposite direction. Although optical fibre can be used in both directions simultaneously, for reliability it is better not to require splitting equipment at the end of the individual fibre to separate transmit and receive signals—hence a fibre pair is used. TAT-14 uses four pairs of fibres—two pairs as active and two as backup. Each fibre in each pair carries 16 wavelengths in one direction, and each wavelength carries up to an STM-256. The fibres are bundled into submarine cables connecting the United States and the European Union in a ring topology. 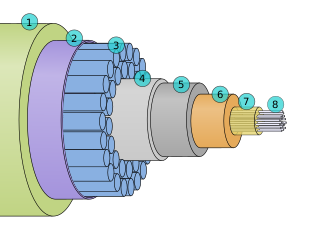 Singapore Telecommunications Limited is a Singaporean multinational telecommunications conglomerate and one of the four major telcos operating in the country, the others being StarHub, M1 and TPG Telecom. The company is the largest mobile network operator in Singapore with 4.1 million subscribers and through subsidiaries, has a combined mobile subscriber base of 640 million customers at the end of financial year 2017 The company was known as Telecommunications Equipment until 1995. Singtel provides ISP, IPTV and mobile phone networks and fixed line telephony services.

The Eastern Africa Submarine Cable System (EASSy) is an undersea fibre optic cable system connecting countries in Eastern Africa to the rest of the world.

Fibre-optic Link Around the Globe (FLAG) is a 28,000-kilometre-long fibre optic mostly-submarine communications cable that connects the United Kingdom, Japan, India, and many places in between. The cable is operated by Global Cloud Xchange. The system runs from the eastern coast of North America to Japan. Its Europe-Asia segment was the fourth longest cable in the world in 2008.

SEA-ME-WE3 or South-East Asia - Middle East - Western Europe 3 is an optical submarine telecommunications cable linking those regions and is the longest in the world. Completed in late 2000, it is led by France Telecom and China Telecom, and is administered by Singtel, a telecommunications operator owned by the Government of Singapore. The Consortium is formed by 92 other investors from the telecom industry. It was commissioned in March 2000.

South East Asia–Middle East–Western Europe 4 is an optical fibre submarine communications cable system that carries telecommunications between Singapore, Malaysia, Thailand, Bangladesh, India, Sri Lanka, Pakistan, United Arab Emirates, Saudi Arabia, Sudan, Egypt, Italy, Tunisia, Algeria and France. It is intended to be a complement to, rather than a replacement for, the SEA-ME-WE 3 cable. 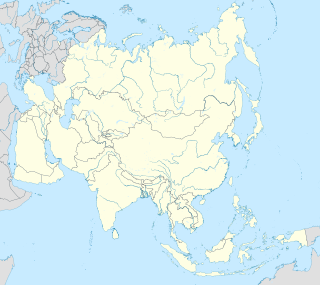 The 2008 submarine cable disruptions were three separate incidents of major damage to submarine optical communication cables around the world. The first incident caused damage involving up to five high-speed Internet submarine communications cables in the Mediterranean Sea and Middle East from 23 January to 4 February 2008, causing internet disruptions and slowdowns for users in the Middle East and India. The incident called into doubt the safety of the undersea portion of the Internet cable system. 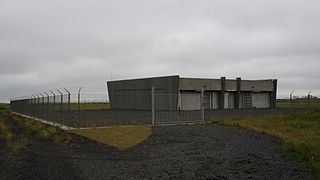 Greenland Connect is a submarine communications cable system that connects Canada, Greenland, and Iceland. The cable contains two fibre pairs specified for 128*10 Gbit/s wavelength each. Initial lit capacity is 1*10 Gbit/s for each fibre pair. Two additional 10 Gbit/s Wavelength were installed in the summer of 2010. The cable has cable landing points at:

The Main One Cable is a submarine communications cable stretching from Portugal to South Africa with landings along the route in various west African countries. On April 28, 2008, it was announced that Main Street Technologies has awarded a turnkey supply contract for the Main One Cable System to Tyco Telecommunications.

The Asia-America Gateway (AAG) is a 20,000-kilometre (12,000 mi) long submarine communications cable system, connecting South-East Asia with the mainland of the United States, across the Pacific Ocean via Guam and Hawaii.

SAex is a proposed submarine communications cable linking South Africa to the United States with branches to Namibia, Saint Helena, and Brazil. 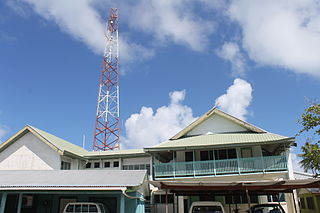 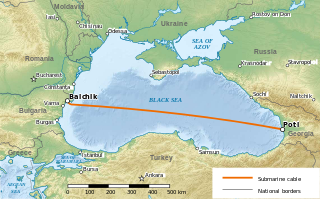 The Caucasus Cable System is a Georgian-owned submarine communications cable in the Black Sea linking Poti, Georgia to Balchik, Bulgaria over a distance of 1,182 km. Its landing station in Balchik is connected to Frankfurt, Germany and other European Internet hubs via terrestrial connection. As the only communications cable linking Georgia directly to Europe, the Caucasus Cable System is deemed of geostrategic importance and has been at the center of controversy due to alleged plans to sell it to a Russian-owned company. As of January 2017 the cable is still in sole ownership of Caucasus Online. 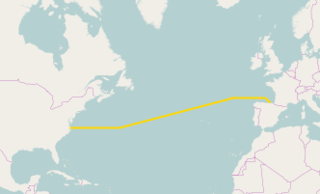 MAREA is a 6,600 km long transatlantic communications cable connecting the United States with Spain. Owned and funded by Microsoft and Facebook, and constructed and is operated by Telxius, a subsidiary of the Spanish telecom company Telefónica, it is the "highest-capacity submarine cable in the world" with a system design capacity of 200 terabits per second.