The Tonga national netball team represents Tonga in international netball. Although netball has been played in Tonga, they joined the International Netball Federation in 2011. [1] [2] Tonga won bronze at the South Pacific Games in 1983, 1991 and 1995. On 21 July 2019, Tonga Re-entered at nineteenth in the INF World Rankings. 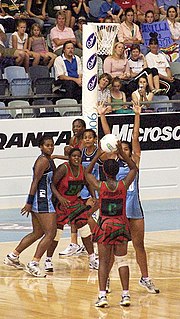 Netball is a ball sport played by two teams of seven players. Netball is most popular in many Commonwealth nations, specifically in schools, and is predominantly played by women. According to the INF, netball is played by more than 20 million people in more than 80 countries. Major domestic leagues in the sport include the Netball Superleague in Great Britain, Suncorp Super Netball in Australia and the ANZ Premiership in New Zealand. Four major competitions take place internationally: the quadrennial World Netball Championships, the Commonwealth Games, and the yearly Quad Series and Fast5 Series. In 1995, netball became an International Olympic Committee recognised sport, but it has not been played at the Olympics.

The American Samoa national football team represents American Samoa in association football and is controlled by the Football Federation American Samoa, the governing body of the sport in the territory. American Samoa's home ground is the Pago Park Soccer Stadium in Pago Pago and their head coach is Tunoa Lui.

The Welsh Netball Association (WNA) is the national governing body for netball in Wales. The WNA is responsible for national championships, Wales national netball team selection, international matches, the training and development of players, coaches and umpires and for the Sport Wales National Centre Netball Academy, Cardiff.

The Oceania Netball Federation is the regional body within the International Federation of Netball Associations that governs netball across Oceania. The current president is Wainikiti Bogidrau. There are currently twenty four countries within the Oceania region. There are seven full members with New Zealand the only one with elite status. Realistically only thirteen nations, predominantly Commonwealth nations, play the game.

The Cook Islands compete as a part of netball's Oceania region. More than 1,000 players have registered to play the sport. Participation in the game grew during the 1970s. Much of this is possible because of the national governing organisation, the Cook Islands Netball Association which is a member of Oceania Netball Federation. Because of the level of organisation and the game's development, the country has participated at several international events including the Pacific Games, the Commonwealth Games, the World Games, the Oceania Netball Tournament, the World Youth Netball Championship, and the International Challenge Men’s and Mixed Netball Tournament. A demonstration of the Cook Islands success can be found by looking at the national team: It is one of the top ranked in the world.

Netball in Samoa is a popular game, usually played by girls on Saturdays during the winter, though games can be played at all times of the year. The sport started to grow in popularity during the 1970s. The popularity of netball is also growing amongst men on the island.

Netball in Tonga is a popular sport, usually played by girls on Saturdays during the winter, though games can be played at all times of the year.

Previously known as the World Youth Netball Championships, the Netball World Youth Cup is the world championships of netball for national U21 teams, with all players being aged 21 years or younger. As part of the Australian Bicentenary celebrations in 1988, a new international tournament for youth took place in Canberra, the capital city of Australia. Its success led to this event being held once every four years. The most recent tournament was held in Gaborone in 2017, with New Zealand taking the title. 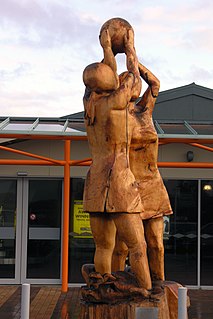 Netball in Oceania is generally regarded as a woman's sport. Women's sports in Oceania have traditionally had a very low profile. Despite this, netball is popular in Oceania, with its growth partly because of New Zealand encouraging the game and providing money for the training of coaches, umpires and other netball development needs. In New Zealand and in neighbouring Australia, netball is one of the most popular sports played by women. 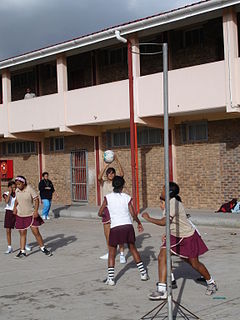 Netball is a popular participant sport in some parts of the world, particularly in countries of the Commonwealth of Nations. According to the IFNA, over 20 million people play netball in more than 72 countries. IFNA member nations are divided into five regional groups: Africa, America, Asia, Europe and Oceania.

Netball at the Pacific Games has been played by women's netball teams from Pacific nations since 1963. It is the oldest Oceania regional tournament.