The Tonga women's national rugby union team are a national sporting side of Tonga, representing them at rugby union. The side first played in 2006 at the Women's Pacific Tri-Nations.

The Tongan National Rugby League is the major rugby league cup for semi-professional clubs in Tonga. Currently there are nineteen teams in the cup that compete annually in the national competition. 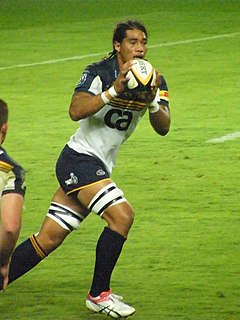 Sitaleki Timani, is a Tongan-born, Australian professional rugby union footballer. He made his test debut for the Wallabies in 2011. His usual position is lock. He's currently playing for Top 14 club Clermont in France.

Tongan Australians are Australians who are of ethnic Tongan descent or Tongans who hold Australian citizenship.

The Tonga National Rugby League (TNRL) was the governing body for rugby league in Tonga. It is based in the capital Nuku'alofa.

David Halaifonua is a Tongan national rugby union player who currently plays for London Scottish in the RFU Championship and for the Tonga national team.