Tongass Island, historically also spelled Tongas Island, is an island in the southern Alaska Panhandle, near the marine boundary with Canada at 54–40 N. It was the site of Fort Tongass, which was established shortly after the Alaska Purchase as a customs port for travelers bound from British Columbian waters to the Stikine River, which was one of the main routes of access to the Cassiar Gold Rush of the 1870s. It lies west of Port Tongass in Nakat Bay, adjacent to the Dixon Entrance and is 0.8 miles in length. Its Native Alaskan name "Kut-tuk-wah" was published in 1869 by the United States Coast and Geodetic Survey; its current name was first published in 1891.

Southeast Alaska, colloquially referred to as the Alaska Panhandle or Alaskan Panhandle, is the southeastern portion of the U.S. state of Alaska, bordered to the east by the northern half of the Canadian province of British Columbia. The majority of Southeast Alaska's area is part of the Tongass National Forest, the United States' largest national forest. In many places, the international border runs along the crest of the Boundary Ranges of the Coast Mountains. The region is noted for its scenery and mild, rainy climate. 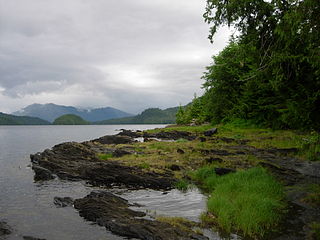 The Tongass National Forest in Southeast Alaska is the largest national forest in the United States at 16.7 million acres (68,000 km2). Most of its area is part of the temperate rain forest WWF ecoregion, itself part of the larger Pacific temperate rain forest WWF ecoregion, and is remote enough to be home to many species of endangered and rare flora and fauna. The Tongass, which is managed by the United States Forest Service, encompasses islands of the Alexander Archipelago, fjords and glaciers, and peaks of the Coast Mountains. An international border with Canada runs along the crest of the Boundary Ranges of the Coast Mountains. The forest is administered from Forest Service offices in Ketchikan. There are local ranger district offices located in Craig, Hoonah, Juneau, Ketchikan, Petersburg, Sitka, Thorne Bay, Wrangell, and Yakutat.

Mitkof Island is an island in the Alexander Archipelago in southeast Alaska between Kupreanof Island to the west and the Alaskan mainland to the east. It is approximately 16 km (9.9 mi) wide and 28 km (17 mi) long with a land area of 539.7 km2 (208.4 sq mi), making it the 30th largest island in the United States. Much of the island is managed as part of the Tongass National Forest.

Etolin Island is an island in the Alexander Archipelago of southeastern Alaska, United States at 56°05′52″N132°21′37″W. It is between Prince of Wales Island, to its west, and the Alaska mainland, to its east. It is southwest of Wrangell Island. It was first charted in 1793 by James Johnstone, one of George Vancouver's officers during his 1791-95 expedition. He only charted its southwest and east coasts, not realizing it was an island. It was originally named Duke of York Island but was renamed by the United States after the Alaska Purchase. It is named after Adolf Etolin, governor of the Russian American colonies from 1840 to 1845. 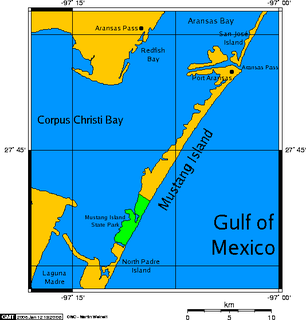 Mustang Island is a barrier island on the Gulf Coast of Texas in the United States. The island is 18 miles (29 km) long, stretching from Corpus Christi to Port Aransas. The island is oriented generally northeast-southwest, with the Gulf of Mexico on the east and south, and Corpus Christi Bay on the north and west. The island's southern end connects by roadway to Padre Island. At the northern end of the island is Port Aransas, beyond which is San José Island. The Aransas Channel, also known as the "Aransas Pass," which separates Mustang Island from San José Island, is protected by jetties extending into the Gulf from each island.

Knight Island is an island in western Prince William Sound of the Gulf of Alaska in the U.S. state of Alaska.

Ward Cove is an unincorporated community in Ketchikan Gateway Borough, Alaska, United States. Its elevation is 164 feet (50 m). Although it is unincorporated, it has a post office, with the ZIP code of 99928.

Tongass Passage is a strait on the Canada–United States border between Alaska and British Columbia, located on the southwest side of Wales Island. Wales Island, and Pearse Island, to its northeast, were claimed by the United States prior to the settlement of the Alaska boundary dispute in 1903. Prior to that time, numerous American-owned canneries lined its shores. Canadian claims to the islands were affirmed in the Alaska Boundary Settlement of 1903, in which Tongass Passage, Pearse Canal and the Portland Canal were defined as comprising "Portland Channel", a term first used in the Anglo-Russian Treaty of 1825 as part of the marine boundary between Russian America and British claims in the region, but which remained undefined until the boundary settlement. 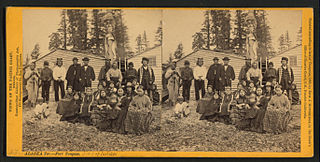 Pearse Canal is a channel or strait forming part of the Canada–United States border at the southern end of the Alaska Panhandle and adjacent to the mouth of Portland Inlet. It is on the northwest side of Wales and Pearse Islands, which are in British Columbia, Canada, and forms part of the southwestern edge of Misty Fjords National Monument in Alaska, United States. The southwest entrance to the strait is between Phipp Point and Maie Point, both in Alaska.

Cordova Bay is a bay in the Alexander Archipelago of southeast Alaska. It opens onto Dixon Entrance to the south, between Cape Muzon on Dall Island and Point Marsh. The name Puerto Cordova y Cordova was given by the Spanish explorer Lieutenant Don Jacinto Caamaño in 1792, in honor of Admiral Luis de Córdova y Córdova. The name was published by George Vancouver in 1798.

The extreme points of British Columbia are four in number:

Fillmore Island is an island in Southeast Alaska, United States. The island lies between Fillmore Inlet and Pearse Canal. The island was charted by George Vancouver in 1793, who sailed around it and proved its insular nature. It was named in 1885 by the U.S. Coast and Geodetic Survey after Ensign John Hudson Fillmore, USN.

Nakat Bay is a bay in Southeast Alaska, United States. The bay extends northeast 8 kilometres (5.0 mi) from Cape Fox. It was charted in 1793 by George Vancouver. The bay's name comes from a Tlingit name published in 1853 on a Russian Hydrographic Department chart as "Bukh(ta) Nakat". 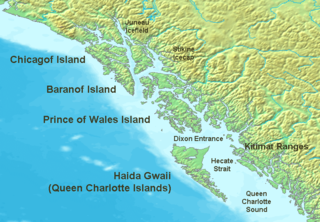 Baranof Island, also sometimes called Baranov Island, Shee or Sitka Island is an island in the northern Alexander Archipelago in the Alaska Panhandle, in Alaska. The name Baranof was given in 1805 by Imperial Russian Navy captain U. F. Lisianski to honor Alexander Andreyevich Baranov. It was called Sheet’-ká X'áat'l by the native Tlingit people. It is the smallest of the ABC islands of Alaska. 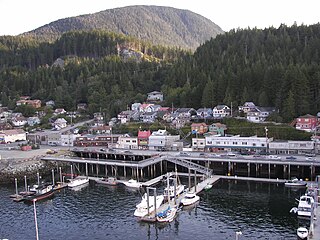 Pennock Island is located in the U.S. state of Alaska near the city of Ketchikan. The island is situated within the Ketchikan Gateway Borough and is part of the Alexander Archipelago. Most of the island is public land managed by the Tongass National Forest.

The South Etolin Wilderness is a wilderness area within the Tongass National Forest of Alaska. The designated wilderness encompasses 82,676 acres, including much of Etolin Island along with several smaller islands, all of which are part of the Alexander Archipelago. Designated in 1990 by the Tongass Timber Reform Act, the wilderness protects classic Southeast Alaska temperate rainforest ecosystems, rising from the densely-forested coast to the glacially-carved summit of 3,720-foot Mount Etolin. An introduced population of Roosevelt elk provides a unique hunting opportunity, both for sport and subsistence purposes.