The Tongi–Bhairab–Akhaura line (Bengali : টঙ্গী-ভৈরব-আখাউড়া রেলপথ) is a railway line connecting Tongi and Akhaura, via Bhairab Bazar in Bangladesh. There is a branch line from Bhairab Bazar to Mymensingh via Gouripur. These tracks are under the jurisdiction of Bangladesh Railway.

In response to the demand of the Assam tea planters for a railway link to Chittagong port, Assam Bengal Railway started construction of a railway track on the eastern side of Bengal in 1891. A 150-kilometre long (93 mi) track between Chittagong and Comilla was opened to traffic in 1895. The Comilla–Akhaura–Kulaura–Badarpur section was opened in 1896–98 and finally extended to Lumding in 1903. In an effort to link this line running on the eastern bank of the Meghna with the rail system on the western bank of the Meghna, the Tongi–Akhaura line came up between 1910 and 1914. However, there was no bridge across the Meghna at that time. [1] [2] [3]

The bridge over the Meghna River, popularly known as the Bhairab railway bridge, was opened on 6 December 1937, enabling passage between Dhaka and Chittagong. [1] [4]

The 1.2-kilometre long (0.75 mi) Bangladesh–UK Friendship Bridge, completed in 2002, carries the Dhaka-Sylhet Highway across the Meghna between Bhairab Bazar and Ashuganj. [6]

Bangladesh Railway signed a deal with a Chinese firm in July 2011 for doubling the 64-kilometre (40 mi) single-line Tongi–Bhairab Bazar track. It has been completed by Jan. 2016. Doubling of the 71-kilometre (44 mi) Akhaura–Laksam section was initiated in 2007. [7]

While the Narayanganj–Bahadurabad Ghat line runs along the southern bank of the old channel of the Brahmaputra River, the Bhairab Bazar–Kishoreganj–Gouripur–Mymensingh line covers the northern bank of the river.

The Mymensingh–Bhairab Bazar Railway Company constructed this line between 1912 and 1918. It was acquired by the government in 1948–49 and the Assam Bengal Railway Company was in charge of the management of the line. [1]

There are two lines branching out of this line – a short Shyamganj-Jaria Janjail Line and a long Gouripur-Netrokona-Mohanganj Line. [1] 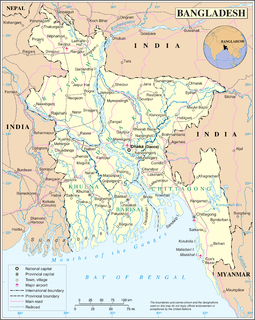 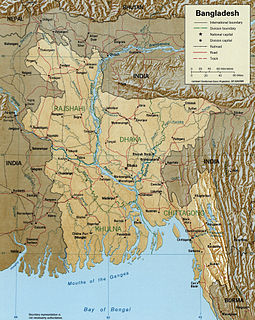 The Meghna River is one of the major and holiest rivers in Bangladesh, one of the three that form the Ganges Delta, the largest delta on earth, which fans out to the Bay of Bengal. A part of the Surma-Meghna River System, Meghna is formed inside Bangladesh in Kishoreganj District above the town of Bhairab Bazar by the joining of the Surma and the Kushiyara, both of which originate in the hilly regions of eastern India as the Barak River. The Meghna meets its major tributary, the Padma, in Chandpur District. Other major tributaries of the Meghna include the Dhaleshwari, the Gumti, and the Feni. The Meghna empties into the Bay of Bengal in Bhola District via four principal mouths, named Tetulia (Ilsha), Shahbazpur, Hatia, and Bamni. 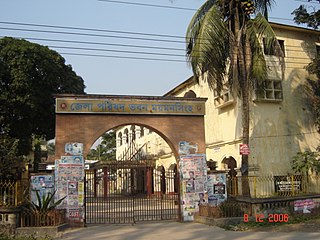 Brahmanbaria is a district in eastern Bangladesh located in the Chittagong Division. Geographically, it is mostly farmland and is topographically part of the Gangetic Plain. It is bounded by the districts of Kishoreganj and Habiganj to the north, Narsingdi District and Narayanganj to the west, Comilla to the south, and the Indian state of Tripura to its east.

The Surma-Meghna River System is a river complex in the Indian Subcontinent, one of the three that form the Ganges Delta, the largest on earth. It rises in the Manipur Hills of northeast India as the Barak River and flows west becoming the Surma River and then flows south as the Meghna River, a total of 946 kilometres (588 mi) of which 669 kilometres (416 mi) are within Bangladesh, to the Bay of Bengal. Prior to Bangladesh Liberation War in 1971, India had no plans for large scale military action in East Pakistan. Since the Sino-Indian War of 1962, the primary objective of the Indian Army Eastern Command was the defence of the Indian northern and eastern borders, defending the "Shiliguri Corridor", and on combating insurgencies raging in Mizoram, Nagaland, Manipur and the Naxalites in West Bengal. 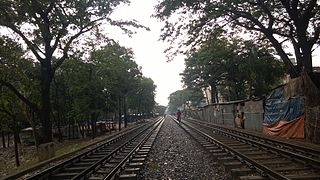 The Narayanganj–Bahadurabad Ghat line is a 250 kilometres (160 mi) long railway line connecting Narayanganj and Bahadurabad Ghat in Bangladesh. There are branch lines to Jagannathganj Ghat and Netrakona-Mohanganj. This track is under the jurisdiction of Bangladesh Railway

The Akhaura–Kulaura–Chhatak line is a railway line connecting Akhaura and Chhatak, via Kulaura in Bangladesh. This line is under the jurisdiction of Bangladesh Railway.

Mahisasan is a border railway station and a defunct railway transit facility point on the India–Bangladesh border in Karimganj district in the Indian state of Assam. The corresponding station on the Bangladesh side is Shahbajpur in Sylhet District. The border station is linked to Karimganj 11 kilometres (6.8 mi) away. The Mahisasan–Shahbajpur route has not been operational since December, 1996 due to lack of traffic.

The Akhaura–Laksam–Chittagong line is a railway line connecting Akhaura and Chittagong, via Laksam in Bangladesh. There are branch lines from Laksam to Chandpur and Noakhali. This line is under the jurisdiction of Bangladesh Railway.

The New Bongaigaon–Guwahati section of the Barauni–Guwahati line connects New Bongagaon and Guwahati in the Indian state of Assam. 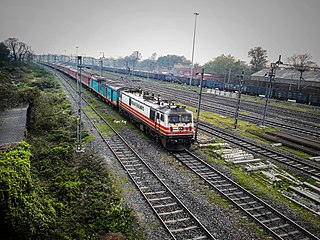 The Barauni–Guwahati railway line connects Barauni, Saharsa, Purnia and Katihar in the Indian state of Bihar and Guwahati in Assam. It is a linkage of prime importance for Northeastern India.

The Assam Bengal Railway (ABR) was one of the pioneering railway companies in British India. Headquartered in Chittagong, it functioned from 1892 to 1942. 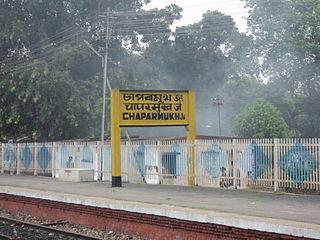 The Guwahati–Lumding section is a broad-gauge railway line connecting Guwahati and Lumding Junction. The 179-kilometre (111 mi) long railway line operates in the Indian state of Assam. It is under the jurisdiction of Northeast Frontier Railway zone.

The N1 or Dhaka–Chittagong Highway is a main transportation artery in Bangladesh, between Dhaka and Chittagong. Approximately 250 kilometres in length, the road links the country's two largest cities, Dhaka and Chittagong. The highway is known along various stretches as the Chittagong–Cox's Bazar Highway and the Cox's Bazar–Teknaf Highway. Currently two lanes with a four-lane expansion underway, the N1 is the busiest road in the country and a top development priority. Construction of a larger Dhaka-Chittagong expressway has been proposed to decrease traffic on the highway. 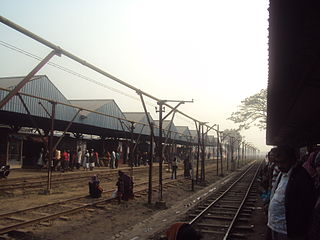 Laksam Junction railway station is one of the five biggest junctions of Bangladesh. It is situated at Laksam sub-district of Comilla district. A junction, in the context of rail transport, is a place at which two or more rail routes converge or diverge. Rail transport operations refer to stations that lie on or near a railway junction as a junction station. Laksam is a junction station.