Cili is a county in Hunan Province, China under administration of the prefecture-level city of Zhangjiajie. Located in the north of Hunan and the east of Zhangjiajie, Cili County is bordered to the southeast by Taoyuan County, to the south and the southwest by Yongding District, to the west and the northwest by Sangzhi County, to the north and northeast by Shimen County. Cili is also the home of the Tujia people. The County has an area of 3,492 kilometres (2,170 mi) with 703,452 of registered population and roughly 613,000 permanent population. It is divided into 25 township-level divisions, its county seat is Lingyang Town (零阳镇).

The Humen Pearl River Bridge (simplified Chinese: 虎门大桥; traditional Chinese: 虎門大橋; pinyin: Hǔmén Dàqiáo; Jyutping: Fu2mun4 Dai6kiu4) is a bridge over the Humen, Pearl River in Guangdong Province, southern China. It consists of two main spans - a suspension bridge section and a segmental concrete section. It connects the Nansha District of Guangzhou to Humen Town of Dongguan. Completed in 1997, the suspension bridge has a main span of 888 meters, and the segmental concrete section's main span of 237 meters is among the longest such spans in the world. It forms part of the G9411 Dongguan–Foshan Expressway. A newer bridge known as Humen Second Bridge (Chinese:虎门二桥), built to reduce the traffic problems on the Humen Bridge, is under construction.

Chonghai Bridge is a bridge, located at 31.85°N 121.28°E, spanning the northern distributary of the Yangtze River in China that is currently under construction. The bridge, along with the Chongqi Bridge and the Shanghai Yangtze River Tunnel and Bridge will connect the city of Shanghai with the north bank of the Yangtze in Jiangsu Province via Chongming Island.

Sun Zhonghuan, is a Chinese politician. He is the former Mayor of Hangzhou, Zhejiang Province. He is the current Chairman of the Hangzhou Political Consultative Conference, a largely ceremonial role. 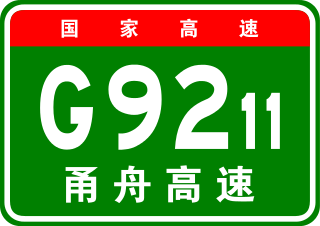 The Ningbo−Zhoushan Expressway, commonly referred to as the Yongzhou Expressway is an expressway in Zhejiang, China which links Ningbo to Zhoushan. In the National Trunk Highway System (NTHS) in China, the number of this highway is G9211. 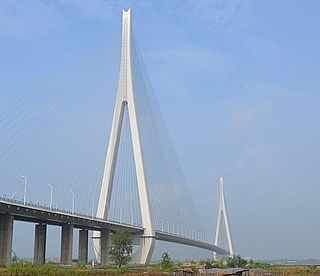 The Edong Yangtze River Bridge is a cable-stayed bridge across the Yangtze River in Hubei Province in eastern China. The bridge connects Huangshi and Xishui County and forms part of the G45 Daqing–Guangzhou Expressway and the G50 Shanghai–Chongqing Expressway. Construction of the bridge started in 2008 and it was completed in 2010. With a main span of 926 m (3,038 ft) it is currently the fourth longest cable-stayed bridge in the world.

The Jiujiang Yangtze River Expressway Bridge, also known as the Second Jiujiang Bridge, is a cable-stayed bridge over the Yangtze River between Huangmei, Huanggang, in Hubei province and Jiujiang, in Jiangxi province. The bridge carries six lanes of traffic on the G70 Fuzhou–Yinchuan Expressway and is the second Yangtze River crossing in Jiujiang. Construction of the bridge started in September 27, 2009 and the bridge was completed in October 28, 2013.

Pingjiang Road, historically known as Shiquan Li (Chinese:十泉里), is a street and historic district in Gusu District, northeastern Suzhou, Jiangsu, China. It is a well-preserved area and is part of the so-called Old Town of Suzhou.

Lu Ziyue is a former Chinese politician who spent his entire career in east China's Zhejiang province. He was put under investigation by the Communist Party of China's anti-corruption agency in March 2016. Previously he served as mayor of Ningbo. He is the second provincial-ministerial rank official sacked for graft from Zhejiang province in the anti-corruption campaign following the 18th Party Congress, after Si Xinliang.

Wang Yongkang is a Chinese engineer and politician, serving since February 2019 as the Standing Committee member of the CPC Heilongjiang Committee. A doctorate in materials science with a background in China's military manufacturing industry, Wang entered politics in 2001 in the city of Ningbo, working his way up the administrative ladder. He served as the mayor of Yuyao and the mayor and party chief of Lishui, Zhejiang, before being anointed to the Zhejiang provincial party standing committee in 2016. Later he served as the Communist Party Secretary of Xi'an from December 2016 to February 2019.

Bailongqiao is a suburban town in Wucheng District of Jinhua, Zhejiang, China. It is the site of district government. As of the 2017 census it had a population of 72,000 and an area of 86.9-square-kilometre (33.6 sq mi).