The bridge has a very long history. It is the first large-sized arch bridge in the Eastern Zhejiang region, so it's also called the First Bridge of Eastern Zhe (traditional Chinese: 浙東第一橋, simplified Chinese: 浙东第一桥, pinyin: Zhè Dōng Dì Yī Qiáo, "Zhe" is the short name for Zhejiang Province). [1]

From the seventh to the ninth year (1729–1731) of the Yongzheng Era in Qing Dynasty, the local government repaired and rebuilt most part of the bridge again, and that's the bridge nowadays looks like. [1]

The bridge nowadays is still in use and has busy traffic everyday. The bridge has three spans, with the central/main span the largest one, and the rest two are equal. The main span is 14.2 meter. The total length of the bridge is about 50 meters. It has 106 steps. [1]

In front of the bridge, it was the old city gate of Yuyao, which is also an ancient structure which is named Shunjiang Building (traditional Chinese: 舜江樓, simplified Chinese: 舜江楼, pinyin: Shùn Jiāng lóu). The bridge and the old city gate together now are the key cultural relic under the city's protection. [2] 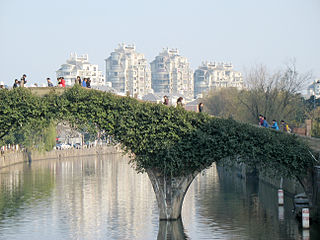 Yuyao is a county-level city in the northeast of Zhejiang province, China. It is under the jurisdiction of the sub-provincial city of Ningbo. 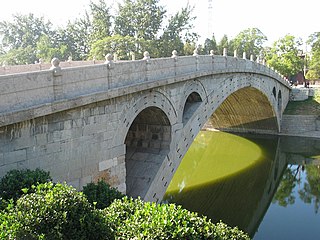 The Anji Bridge is the world's oldest open-spandrel segmental arch bridge of stone construction. Credited to the design of a craftsman named Li Chun, the bridge was constructed in the years 595–605 during the Sui dynasty (581–618). Located in the southern part of Hebei Province, it is the oldest standing bridge in China.

Tongji may refer to:

The Yongji Bridge of Chengyang, also called the Chengyang Wind and Rain Bridge, is a bridge in Sanjiang County, of Guangxi, China.

The Guyue Bridge is an arch bridge located in Yiwu, Zhejiang province, China. 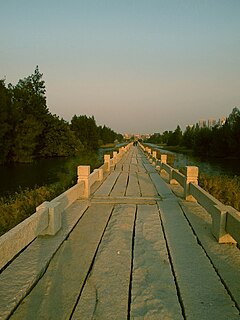 Anping Bridge is a Song dynasty stone beam bridge in Fujian province. It is 2,070 metres (1.29 mi) long. The bridge is also known as the Wuli Bridge because its length is about 5 li, where a li is about 500 meters or 0.3 miles. It is a nationally protected historic site registered with the National Cultural Heritage Administration.

Tongji Bridge can refer to:

Guangji Bridge could be: 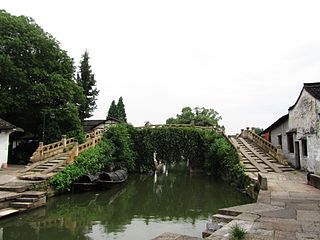 The Bazi Bridge is a stone arch bridge in Shaoxing, Zhejiang, China. The bridge is named for its shape like the Chinese character "八" ("eight").

The Guanyin Bridge is a historic stone arch bridge in Nanxun, Huzhou, Zhejiang, China. It is the largest bridge in the town of Nanxun.

The Hongji Bridge is a historic stone arch bridge over the Dongshi River in Nanxun, Huzhou, Zhejiang, China.

The Guanghui Bridge is a historic stone arch bridge over the Nanshi River in Nanxun, Huzhou, Zhejiang, China. In is backed by the Taoist temple Guanghui Palace. 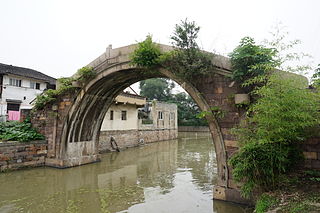 Qinghua Rainbow Bridge was a large stone beam bridge in the town of Qinghua, Wuyuan County, Jiangxi, China. The bridge went across the Le'an River. The bridge was 140 m (459 ft) long and had 3.1 m (10 ft) wide, with 4 piers and 5 bridge openings.