Tongjiang (Chinese :同江; pinyin :Tóngjiāng) is a city of 160,000 in eastern Heilongjiang province, People's Republic of China, located at the confluence and on the right banks of the Songhua and Amur Rivers, the latter which marks the border with Russia. Administratively it is a county-level city of Jiamusi.

From 698 to 936, the kingdom of Balhae occupied northern Korea and parts of Manchuria and Primorsky Krai, consisting of the Nanai, the Udege, and the Evenks and descendants of the Tungus-speaking people and the people of the recently fallen Goguryeo kingdom of Korea. The vicinity of Tongjiang was settled at this moment by Heishui Mohe tribes (Hangul : 흑수말갈 Hanja/Hanzi : 黑水靺鞨 pinyin : Hēishuǐ Mòhé). These tribes were submitted to Balhae Kingdom under King Seon's reign (818-830). 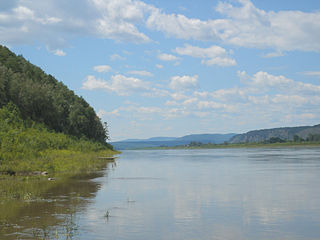 The Amur, or Heilong Jiang, is the world's tenth longest river, forming the border between the Russian Far East and Northeastern China. The Amur proper is 2,824 kilometres (1,755 mi) long, and has a drainage basin of 1,855,000 square kilometres (716,000 sq mi). Including its source river Argun, it is 4,440 km (2,760 mi) long. The largest fish species in the Amur is the kaluga, attaining a length as great as 5.6 metres (18 ft). The river basin is home to a variety of large predatory fish such as northern snakehead, Amur pike, taimen, Amur catfish, predatory carp and yellowcheek, as well as the northernmost populations of the Amur softshell turtle and Indian lotus. 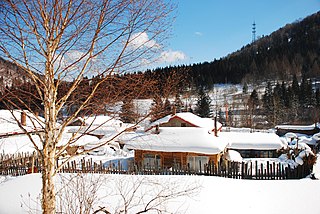 Heilongjiang is a province of the People's Republic of China, located in the northeast of the country. It is the northernmost and easternmost province of the country. The province is bordered by Jilin to the south and Inner Mongolia to the west. It also shares a border with Russia to the north and east. The capital and the largest city of the province is Harbin. Among Chinese provincial-level administrative divisions, Heilongjiang is the sixth-largest by total area and the 15th-most populous.

Balhae (698–926) was a multi-ethnic kingdom in Manchuria, the Korean peninsula and the Russian Far East. The history of the founding of the state, its ethnic composition, the nationality of the ruling dynasty, the reading of their names, and its borders are the subject of a historiographical dispute between China, Russia and Korea. There is no single accepted opinion on the history of this state. 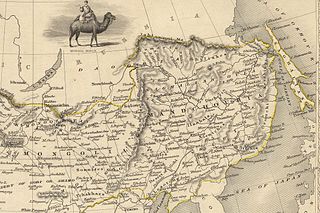 Manchuria is a region in East Asia. Depending on the definition of its extent, "Manchuria" can refer either to a region falling entirely within present-day China, or to a larger region today divided between Northeast China and the Russian Far East. To differentiate between the two parts following the latter definition, the Russian part is also known as Outer Manchuria, while the Chinese part is known as Inner Manchuria. 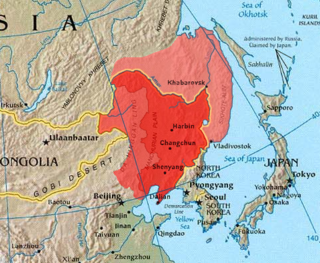 Outer Manchuria or Russian Manchuria is a term for a territory in Northeast Asia that is part of Russia and had formerly belonged in a phase of history to the Qing dynasty. It is considered part of Manchuria. Russia annexed this territory by way of the Treaty of Aigun in 1858 and the Treaty of Peking in 1860 and absorbed the area. The northern part of the area was in dispute between 1643 and 1689. 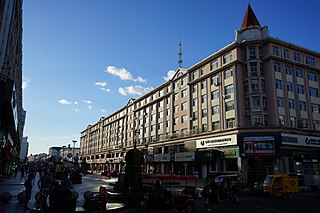 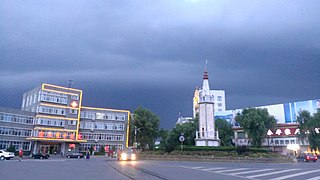 Tongjiang-Nizhneleninskoye railway bridge is an international Sino-Russian railroad bridge.The bridge will link Nizhneleninskoye in the Jewish Autonomous Oblast with Tongjiang in Heilongjiang Province. 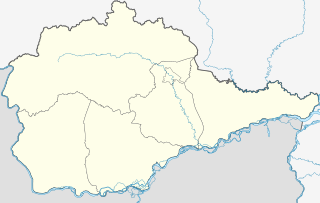 Mohe is a county-level city in Daxing'anling Prefecture, Heilongjiang province. It is the Northernmost Chinese city.