The monastery was founded by Tongkor I, Dawa Gyaltsen, in the 15th century. It was previously the largest monastery in the county with some 500 monks about the beginning of the 20th century. This had dropped to about 70 monks at the time of the 2008 crackdown. [1]

"On April 3, 2008, troops fired upon protesters from Tongkor (Chinese: Donggu) monastery, 60 kilometers from Kardze town, killing at least 10 people. The protests were sparked by a raid on the monastery by police, the detention of a senior monk, and resentment over intensified Patriotic Education." [2]

Some accounts claim up to 14 people were killed. [3]

Lithang Tulku Tenzin Delek Rinpoche or Tenzing Deleg was a Tibetan Buddhist leader from Garze, Sichuan. He is also known for working to develop social, medical, educational and religious institutions for Tibetan nomads in eastern Tibet, as an advocate for environmental conservation in the face of indiscriminate logging and mining projects, and as a mediator between Tibetans and Chinese.

Ngawa or Aba town is the seat of Ngawa (Aba) County, within the Ngawa (Aba) Tibetan and Qiang Autonomous Prefecture in northwestern Sichuan, China. It is located on the Tibetan plateau at an elevation of 3,200 metres. The city is about 75 km from Jigdril, 254 km from Barkham (Ma'erkang) and 157 km from Mewa (Hongyuan). 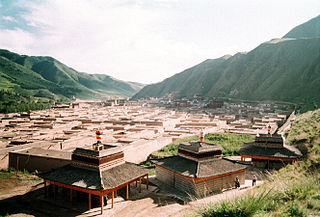 Labrang Monastery is one of the six great monasteries of the Gelug school of Tibetan Buddhism. Its formal name is Genden Shédrup Dargyé Trashi Gyésu khyilwé Ling. 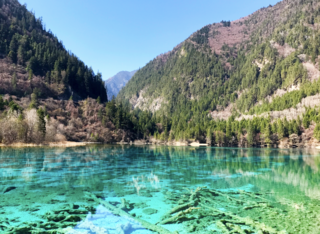 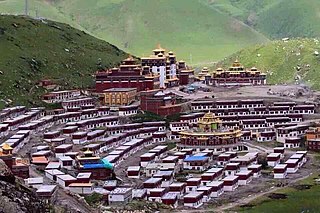 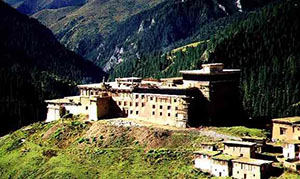 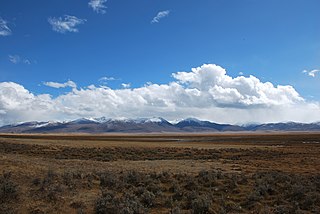 Litang or Lithang County is in southwest of Garzê Tibetan Autonomous Prefecture, Sichuan, China. In 2001, it had a population of 47,500. 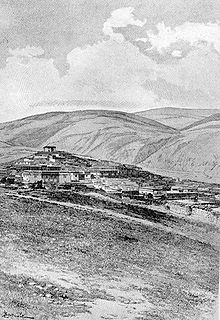 Litang Town is the administrative centre of Litang County in the southwest of the Garzê Tibetan Autonomous Prefecture in Sichuan Province of China.

The 2008 Tibetan unrest was a series of protests and demonstrations over the Chinese government's treatment and persecution of Tibetans. Protests in Lhasa by monks and nuns on 10 March have been viewed as the start of the demonstrations. Numerous peaceful protests and demonstrations were held to commemorate the 49th anniversary of the 1959 Tibetan Uprising Day, when the 14th Dalai Lama escaped from Tibet. The protests and demonstrations spread spontaneously to a number of monasteries and throughout the Tibetan plateau, including into counties located outside the designated Tibet Autonomous Region. The arrest of monks at Labrang Monastery increased the tenseness of the situation. Violence began when Chinese police and People's Liberation Army units used force on non-violent protests by monks and nuns, and spread when protesting Tibetans later clashed with security forces. Clashes also occurred between Tibetans and Chinese Han and Hui residents, resulting in Han and Hui stores and buildings being destroyed and numerous Chinese civilians being injured or killed. 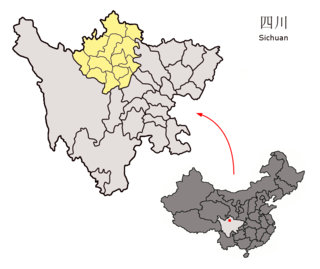 In Sichuan province, in an area incorporating the traditional Tibetan areas Kham and Amdo, Tibetan monks and police clashed in riots on 16 March in Ngaba county (Aba) after the monks staged a protest. It formed part of the 2008 Tibetan unrest and was one of two major events to happen in Sichuan during 2008, the other being the 2008 Sichuan earthquake in May 2008. 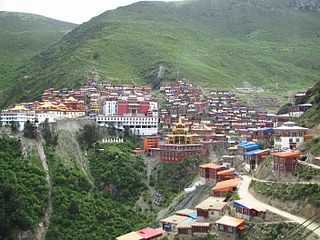 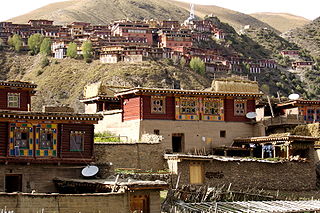 Dzongsar Monastery is a Buddhist monastery in Dêgê County in the Garzê Tibetan Autonomous Prefecture of Sichuan, China, southeast of the town of Derge and east of Palpung Monastery. Historically it lay in the Kham region of Tibet. It was founded in 746, destroyed in 1958, and rebuilt in 1983.

Garzê or Gānzī, is a town and county seat in Garzê County, Garzê Tibetan Autonomous Prefecture in western Sichuan Province, China. Despite Garzê Prefecture being named after the town, the prefecture capital is actually Kangding, 365 km to the southeast. As of 2010, Garzê was home to 16,920 inhabitants. Garzê is an ethnic Tibetan township and is located in the historical Tibetan region of Kham. It contains the 15th century Kandze Monastery, home to over 500 Gelugpa monks.

Kirti Gompa, is a Tibetan Buddhist monastery founded in 1472 and located in Ngawa, Sichuan province, in China, known as Kham. Numerous other associated Kirti monasteries and nunneries are located nearby. As of March 2011, the Kirti Gompa was said to house 2,500 monks. Between 2008 and 2011, mass arrests and patriotic re-education programs by Chinese authorities have targeted the monks, reducing the population substantially to 600 monks. The wave of Tibetan self-immolations began at Kirti Gompa. 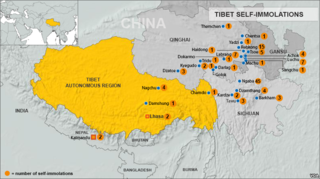 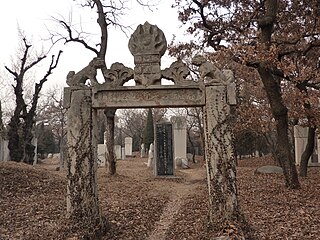 Antireligious campaigns in China refer to the Chinese Communist Party's official promotion of state atheism, coupled with its persecution of people with spiritual or religious beliefs, in the People's Republic of China. Antireligious campaigns began in 1949, after the Chinese Communist Revolution, and continue in Buddhist, Christian, Muslim, and other religious communities in the 21st century. State campaigns against religion have escalated since Xi Jinping became General Secretary of the Chinese Communist Party. For Christians, government decrees have mandated the destruction of houses of worship, such as Christian churches. In Tibet, similar decrees have mandated the destruction of Tibetan Buddhist monastic centers, of sacred Buddhist sites, of monastic residences, the denial of the Tibetan people's right to freely access their cultural heritage, and resulted in the ongoing persecution of high Buddhist lamas and of Buddhist nuns and monks. Reports of forced reeducation camps, arrests, beatings, rape, and destruction of religious sites in Tibet are likewise being made with regard to the Uyghur people, who are also allegedly being subjected to an ongoing cultural genocide.