Tongland is a small village about 2 miles (3 km) north of Kirkcudbright, in the historic county of Kirkcudbrightshire in Dumfries and Galloway, Scotland. It lies on the west bank of the Dee near its confluence with the Tarff Water.

Tongland Abbey, a medieval Premonstratensian monastic community, existed here during the Middle Ages. The remains of Tongland Abbey are now within the churchyard just south of the main road. Tongland Church built in 1813, is now disused and in a state of ruin, although the graveyard is still in use.

The Dee is crossed shortly downriver by Tongland Bridge, a stone arch bridge constructed in 1806 by civil engineer Thomas Telford. [1] Telford was assisted in the Works by resident civil engineer, A Blane. [1] There is also an earlier bridge dating to 1761 which is approximately 500 metres (550 yd) to the north-east.

Since the 1930s, Tongland has been the site of a hydro-electric power station, part of the Galloway Hydro Electric Scheme. The station used to be open to visitors during the summer months, since 2007 this has no longer been the case. Slightly earlier, between 1921 and 1922 'Galloway' cars were made in Tongland in a First World War factory staffed mainly by female apprentice engineers. [2] The Galloway Engineering Company factory was originally completed in 1917 and was powered by its own hydro-electric scheme on the Dee. [3]

Since 2004, there have been several construction projects, with the site of a former garage now home to three new houses. There are also several more houses being constructed. In 2006, street lights were installed along the A711 which passes through the village. 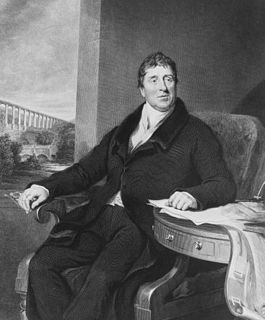 Thomas Telford FRS, FRSE was a Scottish civil engineer. After establishing himself as an engineer of road and canal projects in Shropshire, he designed numerous infrastructure projects in his native Scotland, as well as harbours and tunnels. Such was his reputation as a prolific designer of highways and related bridges, he was dubbed The Colossus of Roads, and, reflecting his command of all types of civil engineering in the early 19th century, he was elected as the first President of the Institution of Civil Engineers, a post he held for 14 years until his death. 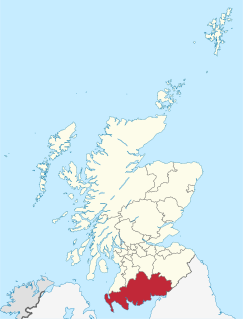 Dumfries and Galloway is one of 32 unitary council areas of Scotland and is located in the western Southern Uplands. It comprises the historic counties of Dumfriesshire, Kirkcudbrightshire, and Wigtownshire, the latter two of which are collectively known as Galloway. The administrative centre is the town of Dumfries. 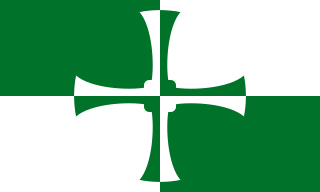 The River Dee, in south-west Scotland, flows from its source in Loch Dee amongst the Galloway Hills, firstly to Clatteringshaws Loch, then into Loch Ken, where it joins the Water of Ken. From there, the Dee flows 15 miles (24 km) southwards to Kirkcudbright, and into Kirkcudbright Bay to reach the Solway Firth. The distance is just over 38 miles (61 km) in total. Together with its tributaries, the Dee's total catchment area is over 400 square miles (1,000 km2).

New Abbey is a village in the historical county of Kirkcudbrightshire in Dumfries and Galloway, Scotland. It is 6 miles (10 km) south of Dumfries. The summit of the prominent hill Criffel is 2.5 miles (4.0 km) to the south.

Balmaghie, from the Scottish Gaelic Baile Mhic Aoidh, is an ecclesiastical and civil parish in the historical county of Kirkcudbrightshire in Dumfries and Galloway, Scotland and was the seat of the McGhee family. It is bordered by the River Dee to the north and east. Threave Castle stands on an island in the river. The River Dee is commonly known as the Black Water of Dee on the northern border, the name changes with the meeting of the Water of Ken to the north west and is then known as Loch Ken along the eastern border. Balmaghie parish borders Girthon to the west and Tongland and Twynholm to the south. The closest market town is Castle Douglas about 6 miles from Balmaghie Kirk.

Loch Ken is a 9 miles (14 km) long freshwater loch in the historic county of Kirkcudbrightshire in Dumfries and Galloway, Scotland. It lies in the Glenkens, where it is fed from the north by the Water of Ken and from the west by the Dee. It continues as the Dee south from Glenlochar, where the water is held back by the Glenlochar Barrage. Part of the Galloway hydro-electric power scheme, the barrage regulates the river's flow. 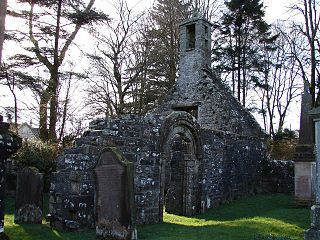 Tungland or Tongland Abbey was a Premonstratensian monastic community located in Tongland in the historical county of Kirkcudbrightshire in Dumfries and Galloway, Scotland. It was probably founded circa 1218 by Alan, Lord of Galloway, although the church of Tongland had previously been granted to Holyrood Abbey by his grandfather Uchtred in the early 1160s. Few of its early abbots are known and its history is more generally covered by a cloud of obscurity. 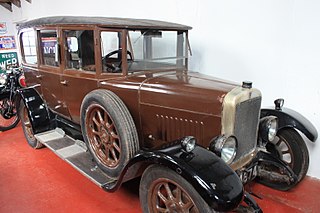 Galloway was a Scottish car maker founded in 1920 as a subsidiary company to Arrol-Johnston. It was based at first at Tongland, Kirkcudbrightshire, and from 1923 at Heathall, Dumfries. It closed in 1928. 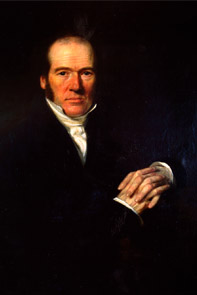 Walter Newall was a Scottish architect and civil engineer, born at Doubledyke in the parish of New Abbey in the historic county of Kirkcudbrightshire, Scotland. He was the leading architect in the Dumfries area, from the 1820s until his retirement. He trained James Barbour who succeeded him as principal architect in the region.

Crossmichael is a small village on the east side of Loch Ken in the historical county of Kirkcudbrightshire, about 4 miles (6.4 km) north of Castle Douglas in Scotland. 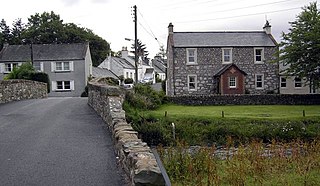 Kirkgunzeon is a village and civil parish in Dumfries and Galloway, south west Scotland. The village is 10.4 miles (16.7 km) south west of Dumfries and 4.1 miles (6.6 km) north east of Dalbeattie. The civil parish is in the former county of Kirkcudbrightshire, and is bounded by the parishes Lochrutton to the north, Urr to the west, Colvend and Southwick to the south and New Abbey to the east.

Marguerite Ellen-Gaudin Stocker MBE was governor of HM Prison Askham Grange in Yorkshire from 1959 until her retirement in 1967.