The original Mongolian name for Tongliao city proper (i.e. Horqin District) is Bayisingtu (Chinese :白音泰赉; pinyin :Báiyīntàilài; lit. 'having buildings'), while the original name of the prefecture-level city is Jirem. The Mongolian dialect spoken in this area is Khorchin Mongolian.

Human settlement in Tongliao and surrounding Khorchin area dates from at least 1000 BC. The Donghu people, a tribe who spoke a proto-Mongolian language, settled in today's Tongliao area, north of Yan during Warring States period [5] . their culture was associated with the Upper Xiajiadian culture, characterized by the practice of agriculture and animal husbandry supplemented by handicrafts and bronze art. [6] Later, the Tongliao area was controlled by Xiongnu, Xianbei, and Khitan tribes.

After the Mongolian Khanate had established the Yuan Dynasty in Chinese territory, Tongliao was put under the jurisdiction of Liaoyang province, whose provincial capital was in today's Liaoning Province. In the early Qing period, Khorchin, Dörbod, Jalaid and Gorlos tribes met in Jirem to establish an alliance, and the Jirem League was founded in 1636 to administer Khorchin territory. The Jirem League had jurisdiction over six Khorchin banners, two Gorlos banners, one Dorbod banner and one Jalaid banner. During the Republican period, the Jirem League and the surrounding Khorchin area was controlled by the Fengtian and Liaoning provinces.

In 1918, Tongliao County was first established under the administration of the Jirem League and Fengtian province. After the Japanese Kwantung Army invaded Manchuria in 1931, a Japanese-controlled puppet state Manchukuo was established in Hsinking, 280 kilometers away from today's Tongliao urban area. The Manchukuo government set up Xing'an Province and soon divided it into four parts, in order to govern the western part of former Heilongjiang, Jilin and Fengtian provinces. These Xing'an provinces roughly overlap today's eastern part of Inner Mongolia, including today's Hulunbuir League, Xingan League, Chifeng and Tongliao. After the dissolution of the Manchukuo state, the Jirem League was governed by Liaoning and Liaobei provinces until Ulanhu established Inner Mongolia in Ulanhot, governing eastern Mongolian areas including the Hulunbuir, Jirem and Ju'ud leagues. After 1969, the Jirem League was put under the administration of Jilin province administration for 10 years until 1979. In 1999, the Jirem League became defunct and changed its name to Tongliao city, which was set up a prefecture-level city.

In 1924, Oomoto leader Onisaburo Deguchi, Aikido founder Morihei Ueshiba, and Lu Zhankui were arrested by Chinese authorities in Tongliao. Lu and his men were executed by firing squad, but Deguchi and Ueshiba were released into the customer of the Japanese consul.

Tongliao's topography primarily consists of plains, [7] though the northern stretch of the prefecture extends into the eastern foothills of the southern Greater Khingan. [7] The central and eastern parts of the prefecture are marked by the plains of the Xiliao, Xinkai River ( 新开河 ), and Jiaolai rivers (教来河), collectively forming the Sanhe Plain (三河平原; 'three rivers' plain'). [7] The highest point in the prefecture is Tunte'er Peak (吞特尔峰), at 1,444.2 m (4,738 ft). [2] [3]

Tongliao has a four-season, monsoon-influenced, continental steppe climate (Köppen BSk), with long, cold, windy, but dry winters, and hot, humid summers. Monthly mean temperatures range from −13.0 °C (8.6 °F) in January to 24.2 °C (75.6 °F) in July, with an annual mean of 7.11 °C (44.8 °F). Much of the year's rainfall occurs from June to August, and even then dry and sunny weather dominates in the city. With monthly percent possible sunshine ranging from 57% in July to 78% in January, sunshine is abundant year-round, with 3,054 hours of bright sunshine annually.

Tongliao railway station is a railway hub in both Inner Mongolia and Northeast China. Tongliao-Beijing Railway conveniently connects the city with Beijing. There are also rails connect Tongliao with Shenyang, Daqing and Jining. State Highway 111, State Highway 303, State Highway 304 and State Highway 204 run through the city and extend to harbor cities such as Tianjin, Dalian, and Qinhuangdao. The city is served by Tongliao Airport. 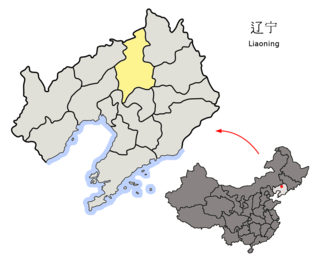 Northeast China, also known as Manchuria, is a geographical region of China. It usually corresponds specifically to the three provinces of Liaoning, Jilin, and Heilongjiang but is sometimes also meant to encompass the northeastern portion of Inner Mongolia. The heartland of the region is the Northeast China Plain. It is separated from Russian Far East to the north by the Amur, Argun, and Ussuri rivers; from Korea to the south by the Yalu and Tumen Rivers; and from China's Inner Mongolian Autonomous Region to the west by the Greater Khingans. 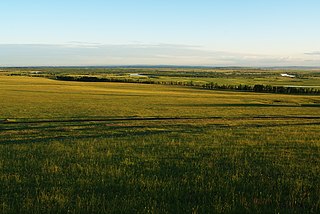 Yangsanjab, Prince Öndür, was a Mongol prince of the Khorchin Left Wing Middle Banner in southeastern Mongolia. He was one of the leading figures in the resistance against Han colonization of Mongolia. Unlike Ghada Meyiren, he is rarely spotlighted, probably because he was from the ruling class and unfits for the Marxist framework of class struggle.

Baarin Left Banner, or Bairin, is a banner of eastern Inner Mongolia, China, under the administration of the prefecture-level city of Chifeng. The banner spans an area of 6,644 square kilometers, and as of 2018, has a population of 340,020. Baarin Mongols live here. The distinct Mongolian dialect of this region is called Baarin. It is located at the intersection of two national highways: China National Highway 303 and 305.

Horqin District is an administrative district of the prefecture-level city of Tongliao, Inner Mongolia, China, and its seat of government.

Jarud Banner is a banner of eastern Inner Mongolia, People's Republic of China. It is under the administration of Tongliao City, 150 kilometres (93 mi), and the China National Highway 304 passes through the area.

Horqin Left Middle Banner, formerly known as Darhan hoshuu, is a banner of eastern Inner Mongolia, People's Republic of China, bordering Jilin province to the east. It is under the administration of Tongliao City, 101 kilometres (63 mi) to the southwest. The local Mongolian dialect is Khorchin Mongolian.

Horqin Right Middle Banner is a banner in the east of Inner Mongolia, China, bordering Jilin province to the east. It is under the administration of Hinggan League. The local Mongolian dialect is Khorchin Mongolian. The banner spans an area of 15,613 square kilometers in area, and has a population of 255,494 as of 2010.

The Jindandao incident refers to a rebellion by a Han Chinese secret society called Jindandao (金丹道), who rose in revolt in Inner Mongolia in November 1891 and massacred 150,000–500,000 Mongols before being suppressed by government troops in late December. The revolt devastated Mongol communities in the southeastern borderland and forced many Mongols to take refuge in northern banners. This massacre was later dubbed an incident by Chinese officials.