Erenhot is a county-level city of the Xilin Gol League, in Inner Mongolia Autonomous Region, located in the Gobi Desert along the Sino-Mongolian border, across from the Mongolian town of Zamyn-Üüd. There are 74,197 inhabitants and the elevation is 966 metres (3,169 ft).

Holingol is a county-level city of Inner Mongolia, China. 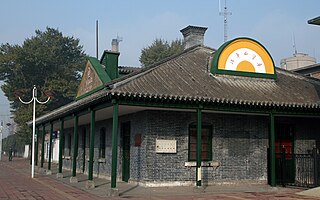 Rail transport in Inner Mongolia is administered by the People's Republic of China.

Luanping County is a county of northeastern Hebei Province, with the Great Wall of China demarcating its border with Miyun District, Beijing to the southwest. It is under the administration of Chengde City, and as of 2017, has a population of 293,200 residing in an area of 3,195 km2 (1,234 sq mi). The G45 Daqing–Guangzhou Expressway, China National Highways 101 and 112, and the Beijing–Tongliao Railway pass through the county. Other bordering county-level divisions are Fengning County to the northwest, Longhua County to the north, Chengde's core districts of Shuangqiao District and Shuangluan District to the east, and Chengde County to the southeast.

Horqin District is an administrative district of the prefecture-level city of Tongliao, Inner Mongolia, China, and its seat of government.

Hure Banner is a banner of southeastern Inner Mongolia, People's Republic of China, bordering Liaoning province to the south. It is under the administration of Tongliao City, 106 kilometres (66 mi) to the north-northeast. 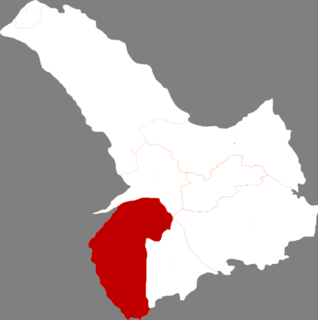 Naiman Banner is a banner of Inner Mongolia, People's Republic of China. It is under the administration of Tongliao City, 156 kilometres (97 mi) to the northeast, and lies on China National Highway 111.

Horqin Left Middle Banner, formerly known as Darhan hoshuu, is a banner of eastern Inner Mongolia, People's Republic of China, bordering Jilin province to the east. It is under the administration of Tongliao City, 101 kilometres (63 mi) to the southwest. The local Mongolian dialect is Khorchin Mongolian.

Horqin Left Rear Banner is a banner of southeastern Inner Mongolia, People's Republic of China, bordering Liaoning province to the south. It is under the administration of Tongliao City, 75 kilometres (47 mi) to the north. The local Mongolian dialect is Khorchin Mongolian.

The Xinmin–Lubei Expressway, commonly referred to as the Xinlu Expressway is an expressway that connects the cities of Xinmin, Liaoning, China, and Lubei, Jarud Banner, Tongliao, Inner Mongolia. The expressway is a spur of G25 Changchun–Shenzhen Expressway.

TGO may refer to:

Holingol Huolinhe Airport is an airport serving the city of Holingol in Tongliao, Inner Mongolia, China. It is located about 30 kilometres (19 mi) southwest of the city center. Construction of the airport began in August 2013, and the first inspection flight was conducted on 20 September 2016. It was opened on 2 June 2017.