Tongo Tongo (French pronunciation: ​ [tɔ̃ɡo tɔ̃ɡo] ) is a village in the rural commune (municipality) of Tondikiwindi (also Tondi Kiwindi), Ouallam Department, Tillabéri Region in southwestern Niger, 174 km north of the nation's capital Niamey and 28 km south of the border with Mali. [4] The village has about 160-170 huts/dwellings, irregularly clustered. There are no roads, just trails that connect to nearby villages such as Siwili, Firo, Sabara Bangou, Sinka Koira, Gollo, Gouré Tonndi, Kokorobé Koukou and Zerma Daré. The population of the commune consists for 99% of the Zarma people (also called Djerma). Most of them own cattle, sheep, goats and dromedaries, renting them out to the Fulani people or Tuareg people for tending. Though arable land is rare and poor, there is also some agriculture, mostly millet and sorghum. The area is part of the Sahel and consists of a vast expanse of plateaux and hills. The physical environment is in an advanced state of degradation caused by habitat destruction, poaching, and by the viccisitudes of the local climate. [5] Tongo Tongo should not be confused with the village Tongo-Tongo in neighbouring Mali.

In March 2017 the Nigerien government declared a state of emergency in the Ouallam Department [6] (and thus in Tongo Tongo) because of the spill-over from the war in nearby Mali, where large areas are under the control of jihadist groups linked to Al-Qaeda. As of fall 2017, many western nations advise against all travel in the Ouallam Department. [7] The U.S. military has been operating in that area with local forces to help them fight terrorism and to disrupt the militants' movements.

On 4 October 2017 a 11-man team of U.S. soldiers from the Army's 3rd Special Forces Group was operating with approximately 35 Forces Armees Nigeriennes (FAN) on a train and advise mission near Tongo Tongo. Militants, both Al-Qaeda in the Islamic Maghreb (AQIM) and ISIS, had been using a nearby route to travel back and forth into Mali and back to a base camp in Niger and traffic in black market merchandise. The Nigerien forces were working to disrupt this so-called rat line and interdict the militants. While scouting the route, the group came under attack from more than 50 enemy fighters, riding in a dozen vehicles and on about 20 motorcycles, firing from numerous directions with small arms. Four Army Special Forces soldiers, five Nigerien soldiers and at least 21 ISGS militants were killed in the ambush. A further eight Nigerien and two US soldiers were wounded. Initially the US acknowledged only three killed, as the fourth soldier initially was missing; his body was found two days later at the location of the incident. US Africa Command communicated that the soldiers killed were Staff Sergeants Bryan Black (35) of Puyallup, Washington, Jeremiah Johnson (39) of Springboro, Ohio, Dustin Wright (29) of Lyons, Georgia, and Sgt. La David Johnson (25) of Miami Gardens, Florida. [8]

No group has taken responsibility for the killings, although officials commented that the US suspected a local branch of Islamic State was responsible, but without publicly naming any group. At the time and location of the ambush threats were deemed unlikely, so there was no overhead armed air cover during the engagement. US Africa Command acknowledged the loss of elite US forces would trigger a review of how the US military carries out operations but did not suggest any move to scale back the American mission in Niger. [9] [10] [11] [12]

On December 27 2018 the French Air Force assisted by Nigerien ground forces conducted a raid near the village killing 15 terrorists and destroying 20 motorcycles.

Tongo Tongo has a desert climate. From October to April there is virtually no rainfall. According to Köppen and Geiger, this climate is classified as BWh. The average annual temperature is 29.4 °C. Average annual precipitation is about 250 mm; most of it falls in August, about 104 mm. May is the warmest month of the year; with a 24h temperature average of 33.9 °C and a daily average maximum of almost 41 °C. January is the coldest month, on average 23.9 °C. [13] 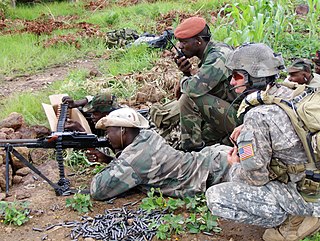 Operation Juniper Shield formerly known as Operation Enduring Freedom – Trans Sahara (OEF-TS) is the military operation conducted by the United States and partner nations in the Sahara/Sahel region of Africa, consisting of counterterrorism efforts and policing of arms and drug trafficking across central Africa. It is part of the Global War on Terrorism (GWOT). The other OEF mission in Africa is Operation Enduring Freedom – Horn of Africa (OEF-HOA).

The Nigerien's Movement for Justice is a largely Tuareg ethnic, northern Niger based militant group. But the MNJ also includes other nomadic ethnicities, within this area, such as the Toubou and the Fulani have also joined the group, which has been battling the Niger government since 2007.

The Insurgency in the Maghreb refers to Islamist militant and terrorist activity in the Maghreb and Sahel regions of North Africa since 2002. The conflict succeeded the conclusion of the Algerian Civil War as the militant group Salafist Group for Preaching and Combat (GSPC) allied itself with al-Qaeda to eventually become al-Qaeda in the Islamic Maghreb (AQIM). Algeria and other Maghreb states affected by the activity have been offered assistance in fighting extremist militants by the United States and the United Kingdom since 2007, when Operation Enduring Freedom – Trans Sahara began.

Bani-Bangou is a town in southwestern Niger, in rural northern Ouallam Department, Tillabéri Region. It is the capital of the rural commune of Bani-Bangou. On the main highway from Ouallam on the route to the Malian border town of Andéramboukane. It is 135 km northeast of Ouallam and 70 km by road from Mali. It around 200 km cross country from Niamey. The town is the seat of a "Rural Commune" of the same name, one of four rural communes in the Department. Nearby villages include Gorou, Bassikwana, and Tondi Tiyaro Kwara to the north; Koloukta and Dinara along the highway west; Ouyé to the southeast.

Tondikiwindi is a village and rural commune in Niger.

Operation Barkhane is an ongoing anti-insurgent operation in Africa's Sahel region, which commenced 1 August 2014. It consists of a 4,500-strong French force, which is permanently headquartered in N’Djamena, the capital of Chad. The operation has been designed with five countries, and former French colonies, that span the Sahel: Burkina Faso, Chad, Mali, Mauritania and Niger. These countries are collectively referred to as the "G5 Sahel". The operation is named after a crescent-shaped dune in the Sahara desert.

Sabara Bangou is a village in the north of the rural commune (municipality) of Tondikiwindi, Ouallam Department, Tillabéri Region in southwestern Niger, 180 km north of the nation's capital Niamey and 22 km south of the border with Mali.
The village has about 70-75 huts/dwellings, irregularly clustered. There are no roads, just trails that connect to nearby villages such as Soufaré, Tiloa, Diéno Koara, Tongo Tongo, Sinka Koira, Gollo, Gouré Tondi and Kokorobé Koukou .
The population of the commune consists for 99% of the Zarma people. Most of them own cattle, sheep, goats and dromedaries, renting them out to the Fulani people or Tuareg people for tending. Though arable land is rare and poor, there is also some agriculture, mostly millet and sorghum. The area is part of the Sahel and consists of a vast expanse of plateaux and hills. The physical environment is in an advanced state of degradation caused by habitat destruction, poaching, and by the viccisitudes of the local climate.

The Tongo Tongo ambush or the Niger ambush occurred on 4 October 2017, when armed militants from the Islamic State in the Greater Sahara (ISGS) attacked Nigerien and US soldiers outside the village of Tongo Tongo, Niger while they were returning to base after a stop in the village. During the ambush, five Nigeriens, four US soldiers, and at least 21 ISGS militants were killed and eight Nigeriens and two US soldiers including the team commander were wounded. In the day preceding the ambush, the Nigerien and US soldiers conducted a mission attempting to locate and capture or kill Doundou Chefou, a commander in the ISGS.

Ibrahim Doundou Chefou is a Nigerien militant and a mid-level commander in the Islamic State in the Greater Sahara. Code named "Naylor Road" by the United States.

The 2017 Ayorou attack occurred on 21 October 2017 when armed militants attacked a Nigerien military outpost in the village of Ayorou in southwestern Niger, killing 13 gendarmes. Occurring just weeks after a similar attack in the area killed four American and four Nigerien troops, the attack was carried out by gunmen who crossed the porous border from Mali. At dawn, militants in 4-5 vehicles and motorcycles and armed with machine guns and rocket launchers attacked paramilitary policemen in Ayorou, a small town on the banks of the Niger River 200 kilometers northwest of Niamey. Thirteen gendarmes were killed and five others were wounded. At least one of the attackers was killed as well. The attackers fled after police reinforcements arrived and pursued them to the border. A similar raid was carried out on the same outpost the previous May.

In the early morning hours of 6 December 2017 militants believed to be affiliated with the Islamic State in West Africa attacked a patrol of US Army Special Forces and Nigerien soldiers near Diffa, in the Lake Chad Basin Region in Niger. During the ensuing firefight, no Nigerien or American personal were killed or wounded while 11 militants including two wearing suicide vests died, an enemy weapons cache was also destroyed by the joint US/Nigerien force a United States Africa Command statement said. The firefight was not planned as the purpose of the mission was aimed at setting "The conditions for future partner-led operations against violent extremist organizations in the region" the statement added.

American-intervention in Niger refers to the deployment of special forces and drones both unarmed and armed by the United States Military and CIA in support of the Nigerien Government and French Forces in counter-terrorism operations against militant groups in Niger, Libya and Mali as part of Operation Juniper Shield. The special forces deployment in Niger and in the greater West Africa region involves the training of host nation partner forces, enhancement of host nation security assistance efforts and to conduct counter-terrorism and surveillance and reconnaissance missions with host nation partner forces. The deployment of drones by the Air Force and CIA is to assist American and Nigerien forces in counter-terrorism operations, to monitor routes used by militants in Niger into neighboring nations and to assist ongoing operations in Libya.

On 9 January 2020, a large group of ISWAP militants assaulted a Nigerien military base at Chinagodrar in Niger's Tillabéri Region. They attacked an army post in Chinagodrar, in the west of the country, in Tillabéri Region, eight miles from the border with Mali, 130 miles north of Niamey. At least 89 Nigerien soldiers were confirmed to have been killed in the attack with more casualties suspected, but yet to be confirmed. 77 militants were claimed by the Nigerien government to have been killed.