Tongqi (同 妻) [1] is a Chinese language neologism for women who have married gay men. Similarly, tongfu (同 夫) is another neologism for men who have married lesbian women. Liu Dalin, among the first sexologists in Mainland China, estimated that 90% of gay Chinese men marry a heterosexual woman. In the United States, 15-20% of gay men did so as of 2010. [2] Sexologist and sociologist Li Yinhe (李银河) believes there are 20 million male homosexuals in China, 80% of whom marry a woman. [3] Gay Chinese men are under social pressure to marry and produce a male heir to continue the family line, as Confucian writers such as Mencius place a strong emphasis on this. [2]

Very few of the women who enter into these marriages are aware that their spouses are gay. [4] Many women have turned to social media because it allows them to maintain anonymity while expressing their feelings about being married to gay men. The majority of these women worry more about the social stigma of being divorced in Chinese society than they do about being in a loveless marriage. For the men, the shame of being stigmatized as homosexual causes them to enter these marriages in the first place. [5] In addition to the emotional toll of being married to a man who does not desire them physically, nearly 90% of these women suffer physical abuse and "sexual apathy" from their husbands. [6] Many women who are married to gay men in China are dependent on the men for financial survival. Even with a divorce, they can be left with social and financial hardships. [7] Only 31.2% of tongqi marriages end in divorce, according to a recent survey. [6] Divorce laws in China do not allow women to seek a dissolution of marriage from their husbands if they are gay. [5] [ failed verification ]

A lot of these women are speaking out against China's policy against same sex marriage beyond chat rooms. Recently, tongqi have been seen marching in Hong Kong's gay rights parade to bring visibility to their plight. [7] A new trend among Chinese gay men and lesbian is arrangements called cooperation marriages, [7] where they marry each other publicly while living with a same sex partner in private. [4] There are services which are available to assist in the matching of gay men to lesbians for the purposes of marriage. [8] Research has been conducted about the plight of tongqi by the Harbin Institute of Technology for the first time that encourages the acceptance of gays, to reduce the number of women subjected to these marriages. [6]

Lesbian, gay, bisexual, and transgender (LGBT) social movements are social movements that advocate for LGBT people in society. Social movements may focus on equal rights, such as the 2000s movement for same-sex marriage, or they may focus on liberation, as in the gay liberation movement of the 1960s and 1970s. Earlier movements focused on self-help and self-acceptance, such as the homophile movement of the 1950s. Although there is not a primary or an overarching central organization that represents all LGBT people and their interests, numerous LGBT rights organizations are active worldwide. The earliest organizations to support LGBT rights were formed in the early 20th century. 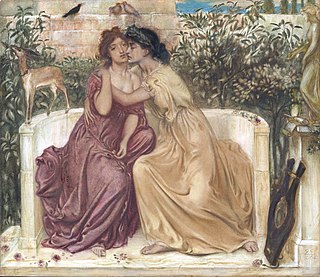 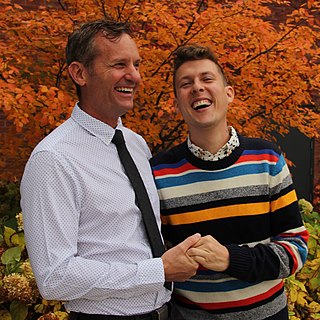 Same-sex marriage, also known as gay marriage, is the marriage of two people of the same sex or gender, entered into in a civil or religious ceremony. There are records of same-sex marriage dating back to the first century. In the modern era, marriage equality was first granted to same-sex couples in the Netherlands on 1 April 2001.

Societal attitudes toward homosexuality vary greatly across different cultures and historical periods, as do attitudes toward sexual desire, activity and relationships in general. All cultures have their own values regarding appropriate and inappropriate sexuality; some sanction same-sex love and sexuality, while others may disapprove of such activities in part. As with heterosexual behaviour, different sets of prescriptions and proscriptions may be given to individuals according to their gender, age, social status or social class.

Lesbianism is the sexual and romantic desire between women. There are historically far fewer mentions of lesbianism than male homosexuality, due to many historical writings and records focusing primarily on men. 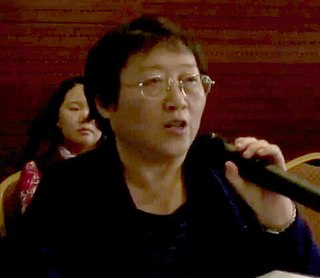 Li Yinhe is a sociologist, sexologist, and activist for LGBT rights in the People's Republic of China. Her main academic interests have been sexual norms in contemporary China, homosexuality, diverse sexual behaviors including sadomasochism, and women's studies. 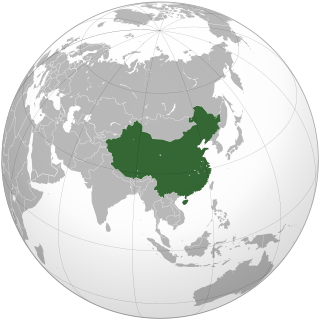 Lesbian, gay, bisexual and transgender (LGBT) people in the People's Republic of China face legal and social challenges that are not experienced by non-LGBT residents. Same-sex couples are unable to marry or adopt, and households headed by such couples are ineligible for the same legal protections available to heterosexual couples. 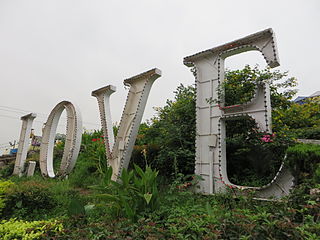 Sexuality in China has undergone revolutionary changes and this "sexual revolution" still continues today. Chinese sexual attitudes, behaviors, ideology, and relations have changed dramatically in the past decade of reform and opening up of the country. Many of these changes have found expression in the public forum through a variety of behaviors and ideas. These include, but are not limited to the following cultural shifts: a separation of sex and marriage, such as pre- and extramarital sex; a separation of sex from love and child-bearing such as Internet sex and one-night stands; an increase in observable sexual diversity such as homo- and bisexual behavior and fetishism; an increase in socially acceptable displays and behaviors of female sexual desire; a boom in the sex industry; and a more open discussion of sex topics, including sex studies at colleges, media reports, formal publications, on-line information, extensive public health education, and public displays of affection.

Although lesbian, gay, bisexual (LGB) rights in Taiwan are regarded by some as one of the most progressive in Asia, transgender rights (T) are more conservative in line with countries such as Pakistan. Both male and female same-sex sexual activity are legal, and same-sex marriage was legalized on 24 May 2019, following a Constitutional Court ruling in May 2017. However, it's currently illegal for same-sex couples to jointly adopt a child, although they may adopt stepchildren.

The extension of civil marriage, union, and domestic partnership rights to same-sex couples in various jurisdictions can raise legal issues upon dissolution of these unions that are not experienced by opposite-sex couples, especially if law of their residence or nationality does not have same-sex marriage or partnerships.

Lesbian, gay, bisexual, transgender (LGBT) persons in Hong Kong, which is a special administrative region of China, may face legal challenges not experienced by non-LGBT residents.

Marriage in China has undergone change during the country's reform and opening period, especially as a result of new legal policies such as the New Marriage Law of 1950 and the Family planning policy in place from 1979 to 2015. The major transformation in the twentieth century is characterized by the change from traditional structures for Chinese marriage, such as the arranged marriage, to one where the freedom to choose one’s partner is generally respected. However, both parental and cultural pressures are still placed on many individuals, especially women, to choose socially and economically advantageous marriage partners. While divorce remains rare in China, the 1.96 million couples applying for divorce in 2010 represented a rate 14% higher than the year before and doubled from ten years ago. Despite this rising divorce rate, heterosexual marriage is still thought of as a natural part of the life course and as a responsibility of good citizenship in China.

The history of lesbian, gay, and bisexual people in China spans thousands of years. Unlike the histories of European and European-ruled polities in which Christianity formed the core of heavily anti-LGBT laws until recent times, non-heterosexual states of being were historically treated with far less animosity in historic Chinese states. For a period of the modern history of both the Republic of China and People's Republic of China in the 20th century, LGBT people received more stringent legal regulations regarding their orientations, with restrictions being gradually eased by the beginning of the 21st century. However, activism for LGBT rights in both countries has been slow in development due to societal sentiment and government inaction.

The China Rainbow Media Awards is a series of awards given to media artisans and publication outlets for their coverage or featuring of lesbian, gay, bisexual and transgender people in the People's Republic of China. It is organized by the Aibai Culture & Education Center and the Beijing Gender Health Education Institute, and the inaugural ceremony was held on December 9, 2011, in Beijing.

Tongfu may refer to: