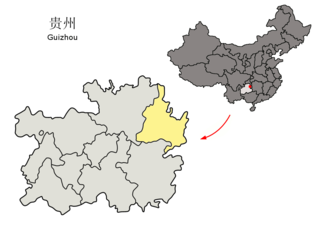 Huaihua is a prefecture-level city in the southwest of Hunan province, China. It covers 27,564 km2 (10,643 sq mi) and is bordered by Xiangxi to the northwest, Zhangjiajie and Changde to the north, Yiyang, Loudi and Shaoyang to the east, Guilin and Liuzhou of Guangxi to the south, and Qiandongnan and Tongren of Guizhou to the southwest. It has a population of 4,741,948, accounting for 7.22% of the provincial population. According to the 2010 Census, 2,909,574 people, or 61.4% of the population, are Han Chinese. Minorities constitute 38.6% of the population, with 1,832,289 people. The Dong, Miao, Tujia, Yao and Bai are major native minority groups. Huaihua is the central region of the Dong ethnic population, home to nearly 28.35% of the Chinese Dong ethnic group.

Tongren Fenghuang Airport is an airport serving the city of Tongren in Guizhou Province, China. It is located in the town of Daxing in Songtao Miao Autonomous County, 21 kilometers from Tongren and 34 kilometers from Fenghuang, a popular tourist destination in neighboring Hunan Province. The airport was opened in 2001. Originally called Tongren Daxing Airport, it was renamed due to the fame of Fenghuang. 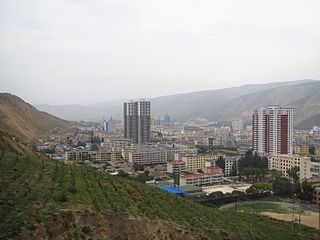 Tongren, known to Tibetans as Rebgong in the historic region of Amdo, is the capital and second smallest administrative subdivision by area within Huangnan Tibetan Autonomous Prefecture in Qinghai, China. The city has an area of 3465 square kilometers and a population of ~80,000 (2002), 75% Tibetan. The economy of the city includes agriculture and aluminium mining.

Laoz, Liao or Lao peoples, is an ethnic cluster covering Zhuang, Buyei, Tay–Nùng and other Northern Tai language-speaking peoples. These peoples are inclined to call themselves as lao which means "person" or "venerable person". 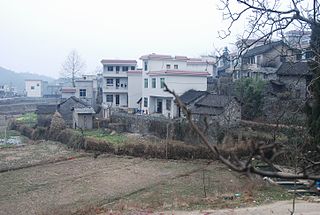 Wanshan District is a district of the city of Tongren, Guizhou province, People's Republic of China, bordering Hunan province to the southeast and east. Wanshan was known as Wanshan Special District (万山特区) until November 2011, when it was renamed Wanshan District. The district has an area of 338 square kilometres (131 sq mi) and in 2002 had a population of 60,000.

Yuping Dong Autonomous County is an autonomous county under the administration of the prefecture-level city of Tongren, in the east of Guizhou Province, China, bordering Hunan Province to the southeast.

Pingbian Miao Autonomous County is a county located in Honghe Hani and Yi Autonomous Prefecture in the southeast of Yunnan province, People's Republic of China. Its seat is located only 21 kilometres (13 mi) from the border with Lào Cai Province, Vietnam.

Yanping District is one of the two districts of Nanping, Fujian province, People's Republic of China. The prefecture government is located in the district, but is gradually moving to the other district, Jianyang District. The population of Yanping District was 504,483 at the 2016

The Amdo Tibetan is the Tibetic language spoken by the majority of Amdowa, mainly in Qinghai and some parts of Sichuan and Gansu.

The Chenzhou train collision occurred on June 29, 2009, at Chenzhou railway station in Chenzhou, Hunan province, China, when two passenger trains collided, leaving at least three people dead and 63 injured. The crash occurred at 02:34 local time, between express trains numbered K9017 and K9063. A brake failure is reported to have caused the crash, although this has not been confirmed. An investigation has been launched.

Yongjing Township is a rural township in Changhua County, Taiwan.

Xinhuang Dong Autonomous County is an autonomous county of Dong people and the westernmost county of Hunan Province, China, it is under the administration of the prefecture-level city of Huaihua. 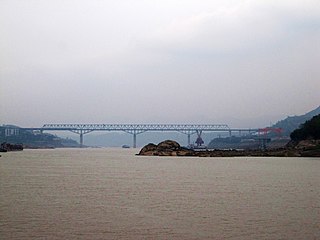 Chongqing–Huaihua railway or Yuhuai railway, is a single-track, electrified railroad in southwest China between Chongqing Municipality and Huaihua in Hunan Province. The line is 624.5 km (388 mi) long and was built between 2000 and 2005. Cities and towns along route include Changshou, Fuling, Wulong, Pengshui, Qianjiang, Youyang Tujia and Miao Autonomous County, Xiushan, Songtao in Chongqing Municipality, Tongren in Guizhou Province and Huaihua in Hunan Province.

The Guzhangian is an uppermost stage of the Miaolingian Series of the Cambrian. It follows the Drumian Stage and precedes the Paibian Stage of the Furongian Series. The base is defined as the first appearance of the trilobite Lejopyge laevigata around 500.5 million years ago. The Guzhangian-Paibian boundary is marked by the first appearance of the trilobite Glyptagnostus reticulatus around 497 million years ago. 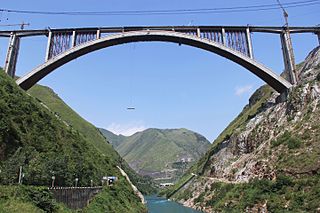 Lin Yuping is a Chinese footballer currently playing as a defender.