Tongtian Jiaozhu (通天教主) or sometimes translated as Grandmaster of Heaven is the third disciple of Hongjun Laozu and younger brother of Yuanshi Tianzun and Taishang Laojun. He has appeared as an antagonist in many legends, classic novels, and television series. Most notably, he features in the classic Chinese novel Fengshen Yanyi , also known as The Investiture of the Gods.

Unlike Yuanshi Tianzun and Taishang Laojun, who become patriarch deities from the Chan Taoism sect. Tongtian made his own sect known as Jie Taoism sect (截教). He lived in Biyou palace on Jinsha island.

Near the end of Shang dynasty, the wicked last ruler of Shang; King Zhou of Shang was rebelled by his ex-subordinate King Wu of Zhou. At this battle most of Jie’s apprentices sided with the evil king Zhou and fought against king Wu, who was assisted by good deities from Chan Sect. As result many of Tongtian Jiaozhu disciples were killed by Chan’s disciples.

Tongtian swore to take revenge, [1] so he led his disciples such as Jinling Shengmu (金靈聖母) and Doubao Daoren to make a deadly trap known as Zhu Xian Zhen (immortal slaughtering trap) to kill Chan’s apprentice. However this trap could be destroyed by Yuanshi Tianzun and Taishang Laojun assisted by Jieyin Daoren and Zhunti Daoren (both from the Western Paradise, or the Buddhist heaven).

Tongtian Jiaozhu then made an even more deadly trap named Wan Xian Zhen (ten thousand immortal slaughtering trap), but once again his scheme was thwarted by Chan and Buddhist followers. Finally he was arrested by his teacher Hongjun Laozu.

On another occasion, Tongtian’s favourite student named Viviparus Spirit left her sect to become goddess of Chan’s Taoism. As result Tongtian Jiaozhu felt very insulted and led his disciple to attack deities of Chan’s Taoism. [2] However he was defeated once more by Taishang Laojun and his disciple, even though his eyes were blinded in the end of battle. 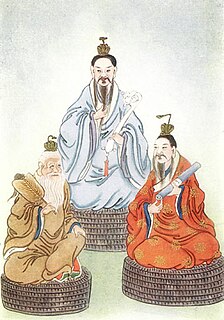 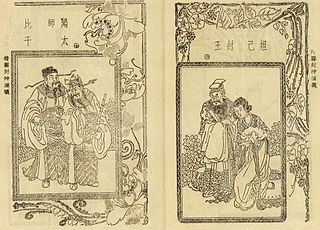 The Investiture of the Gods or The Creation of the Gods, even The Birth Of The Chinese Gods. also known by its Chinese names Fengshen Yanyi and Fengshen Bang (封神榜), is a 16th-century Chinese novel and one of the major vernacular Chinese works in the gods-and-demons (shenmo) genre written during the Ming dynasty (1368–1644). Consisting of 100 chapters, it was first published in book form between 1567 and 1619. Another source claims it was published in 1605. The work combines elements of history, folklore, mythology, legends and fantasy. 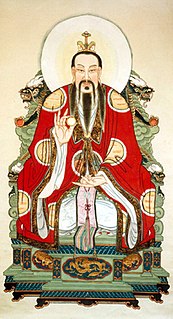 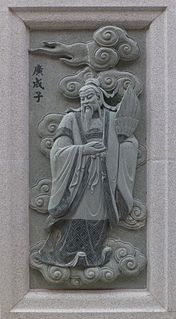 Guang Chengzi is a character in the classic Chinese novel Fengshen Yanyi.

Li Jing, also known as Pagoda-Bearing Heavenly King Li is a figure in Chinese mythology and a god in Chinese folk religion. He carries a tower that can capture any spirit, demon or god within its walls. He also appears in the classic Chinese novels Journey to the West and Fengshen Yanyi. He is an analogue of Vaisravana.

Randeng Daoren is a character in the famed classic Chinese novel Fengshen Yanyi. He was renowned as the Superiorman of Mount Condor, Intuition Cave. His role originated from Dipankara Buddha of Buddhist lore, who was a past enlightened being before the time of Gautama Buddha. 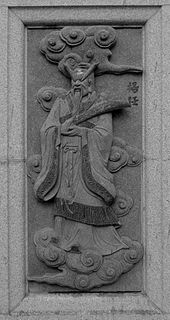 Yang Ren is a character from the classic Chinese novel Fengshen Yanyi.

Wen Zhong is a character in the classic Chinese novel Fengshen Yanyi. Wen Zhong had been the top ranked official under King Da Yi since the times of old. Following the death of Da Yi, Wen Zhong crowned Zi Shou as the new king of the Shang Dynasty. In short time, Wen Zhong headed out on his great dragon to subdue rebelling demons within the North Sea.

Daode Tianzun, also known as Taishang Laojun is a high Taoist deity. He is the Taiqing which is one of the Three Pure Ones, the highest divinities of Taoism. 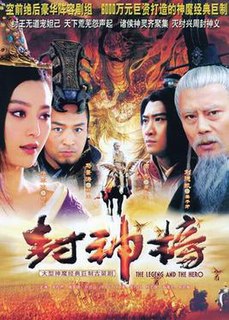 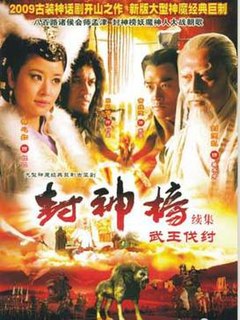 Kong Xuan is a peacock spirit who became King Zhou’s general in the novel Fengshen Yanyi. His character is based on Mahamayuri from Buddhist myth. 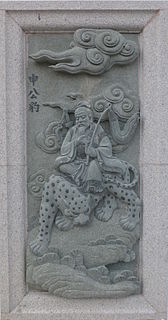 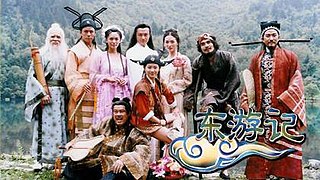 Legend of the Eight Immortals is a Singaporean television series based on stories about the Eight Immortals in Chinese mythology and adapted from the 16th-century Chinese novel Dong You Ji by Wu Yuantai (吴元泰). Produced by the Television Corporation of Singapore in collaboration with two mainland Chinese companies, the series had cast members from Singapore, Taiwan, Hong Kong and mainland China. It was first aired in Singapore on TCS Channel 8 from 26 November 1998 to 6 January 1999.

Yuding Zhenren (玉鼎真人) is a Taoist deity and character in the classic Chinese novel Fengshen Yanyi. He is one of the twelve golden immortals. His disciple is Yang Jian and he taught him fighting and magical skills including the 72 earthly transformations.

Jinling Shengmu is a Taoist deity and character in the classic Chinese novel Fengshen Yanyi, which is also known as The Investiture of the Gods.