Tongue River may refer to:

The Tongue River is a 90.4-mile-long (145.5 km) tributary of the Pembina River in northeastern North Dakota in the United States. It drains an area of the prairie country near the Canada–US border in the extreme northeast corner of the state in the watershed of the Red River. 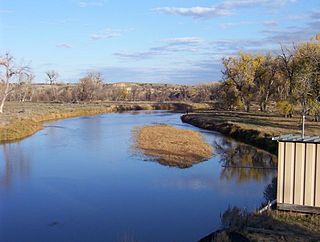 The Tongue River (Texas) is a river in Texas.

The Yellowstone River is a tributary of the Missouri River, approximately 692 miles (1,114 km) long, in the western United States. Considered the principal tributary of the upper Missouri, the river and its tributaries drain a wide area stretching from the Rocky Mountains in the vicinity of the Yellowstone National Park across the mountains and high plains of southern Montana and northern Wyoming.

The Little Missouri River is a tributary of the Missouri River, 560 miles (901 km) long, in the northern Great Plains of the United States. Rising in northeastern Wyoming, in western Crook County about 15 miles (24 km) west of Devils Tower, it flows northeastward, across a corner of southeastern Montana, and into South Dakota. In South Dakota, it flows northward through the Badlands into North Dakota, crossing the Little Missouri National Grassland and both units of Theodore Roosevelt National Park. In the north unit of the park, it turns eastward and flows into the Missouri in Dunn County at Lake Sakakawea, where it forms an arm of the reservoir 30 miles (48 km) long called Little Missouri Bay and joins the main channel of the Missouri about 25 miles (40 km) northeast of Killdeer.

Beaver Creek is the name of several places and waterways in North America.

Knife River may refer to:

Tongue most generally refers to the muscle on the floor of the mouth. By analogy or other figure of speech it can also refer to:

The Northern Cheyenne Indian Reservations is home of the federally recognized Northern Cheyenne Tribe. Located in southeastern Montana, the reservation is approximately 444,000 acres (1,800 km2) in size and home to approximately 5,000 Cheyenne people. The tribal and government headquarters are in Lame Deer, which is also the home of the annual Northern Cheyenne Pow wow. The reservation is bounded on the east by the Tongue River and on the west by the Crow Reservation. There are small parcels of non-contiguous off-reservation trust lands in Meade County, South Dakota, northeast of the city of Sturgis. Its timbered ridges that extend into northwestern South Dakota are part of Custer National Forest and it is approximately 40 miles (64 km) east of the site of the 1876 Battle of the Greasy Grass.

A cut bank is an outside bank of a river that is continually being undercut. It also may refer to:

The area that eventually became the U.S. state of Montana played little direct role in the American Civil War. The closest the Confederate States Army ever came to the area was New Mexico and eastern Kansas, each over a thousand miles away. There was not even an organized territory using "Montana" until the Montana Territory was created on May 26, 1864, three years after the Battle of Fort Sumter. In 1861, the area was divided between the Dakota Territory and the Washington Territory, and in 1863, it was part of the Idaho Territory. 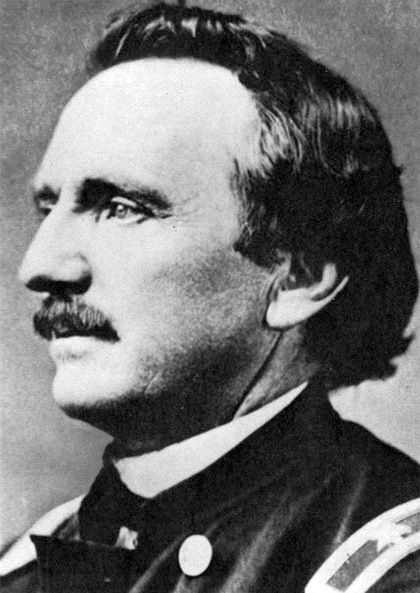 The Raynolds Expedition was a United States Army exploring and mapping expedition intended to map the unexplored territory between Fort Pierre, Dakota Territory and the headwaters of the Yellowstone River. The expedition was led by topographical engineer Captain William F. Raynolds.