Tongue orchid or tongue-orchid is a common name for several plants and may refer to: 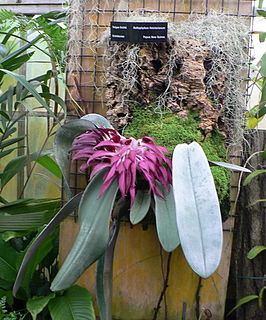 Bulbophyllum fletcherianum, the tongue orchid, Fletcher's bulbophyllum or Spies' bulbophyllum, is a rare orchid native to southern New Guinea. It prefers sunny rock outcrops or mossy tree branches, but besides being lithophytic or epiphytic, it can also be pseudo-terrestrial. The Tongue Orchid requires high humidity and moist roots.

Dendrobium linguiforme, commonly known as the thumbnail orchid, tick orchid or tongue orchid, is a plant in the orchid family Orchidaceae and is endemic to eastern Australia. It grows on trees or on rocks, with wiry, prostrate stems, prostrate, fleshy leaves and spikes of up to twenty white to cream-coloured flowers in early spring. 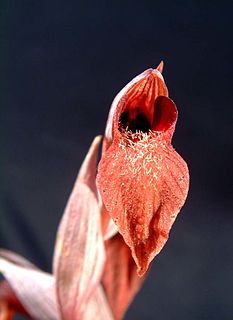 Serapias is a genus of terrestrial orchids that can be found all over southern Europe to Asia Minor. The genus was named after Serapis, a syncretic Hellenistic-Egyptian god in Antiquity. Serapias have spurless flowers and usually go dormant during the winter seasons. 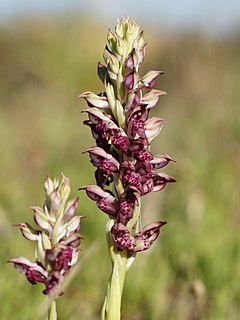 Anacamptis is a genus from the orchid family (Orchidaceae); it is often abbreviated as Ant in horticulture. This genus was established by Louis Claude Richard in 1817; the type species is the pyramidal orchid and it nowadays contains about one-third of the species placed in the "wastebin genus" Orchis before this was split up at the end of the 20th century, among them many that are of hybrid origin. The genus' scientific name is derived from the Greek word anakamptein, meaning "to bend backwards". 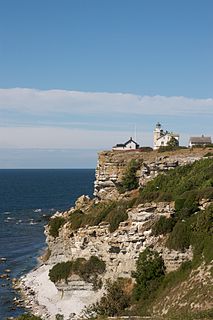 Stora Karlsö is an island off the west coast of Gotland, Sweden; part of Eksta socken. It is mostly known for its rich birdlife with large colonies of common guillemot, and flora. Stora Karlsö is a nature reserve, the second oldest in the world after Yellowstone National Park. 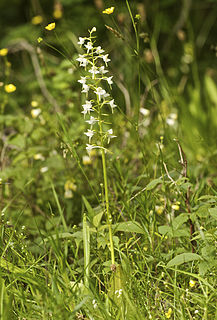 Platanthera chlorantha, commonly known as greater butterfly-orchid, is a species of orchid in the genus Platanthera. It can be found throughout Europe and Morocco. The name Platanthera is derived from Greek, meaning "broad anthers", while the species name, chlorantha, means "green-flowered".

Bonnet orchid may refer to:

Resupination is derived from the Latin word resupinus, meaning "bent back with the face upward" or "on the back". "Resupination" is the noun form of the adjective "resupine" which means "being upside-down, supine or facing upward".

Serapias parviflora, the small-flowered tongue-orchid, is a species of orchid native to the Mediterranean Basin and the Atlantic coast of Europe.

Serapias vomeracea, common name long-lipped serapias or the plow-share serapias, is a species of orchid in the genus Serapias. 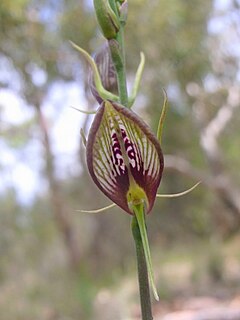 Cryptostylis erecta, commonly known as the bonnet orchid or tartan tongue orchid , is an orchid endemic to south eastern Australia. A small and common plant, it has dark green lance-shaped to egg-shaped leaves and up to twelve greenish flowers with a large, bonnet-like or hood-like, lilac-coloured labellum with a network of purple veins.

Lissopimpla excelsa, commonly known as the orchid dupe wasp, is a Wasp of the family Ichneumonidae native to Australia. Although also found in New Zealand it has probably been introduced there. Although another source cites that it maybe native to NZ.It pollinates all five Australian members of the orchid genus Cryptostylis. The male wasp mistakes the flower parts for a female wasp and attempts to copulate with it. Although the different species can occur together, they appear to inhibit cross-fertilisation and no hybrids are found in nature. This discovery was made by Australian naturalist Edith Coleman in 1928. The term "pseudocopulation" has since been coined to describe the phenomenon. The mimicking of flowers to resemble female wasp parts has since been recorded in other orchid genera.

Serapias stenopetala is an Orchid plant that is in the genus Serapias. The common name of the plant is sérapias à pétales étroits in French. The plant is endemic to Algeria, and Tunisia.

C. leptochila may refer to: 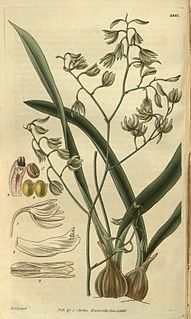 Encyclia viridiflora is a species of epiphytic orchid of green flowers, native to the north of Brazil and is the type species for the genus Encyclia. Especially the specimen was found in the area of Rio de Janeiro.

Cryptostylis ovata, commonly known as the slipper orchid or western tongue orchid, is an orchid endemic to Western Australia. It is a common, summer flowering species with dark green leaves with a white central vein and up to fifteen pale greenish flowers with a brownish red labellum with a network of darker veins.