Tonhalle Düsseldorf is a concert hall in Düsseldorf. It was built by the architect Wilhelm Kreis. [1] The resident orchestra, the Düsseldorfer Symphoniker, play symphonic repertoire at the Tonhalle as well as opera at the Deutsche Oper am Rhein.

It was built in 1926 for the GeSoLei exhibition as a planetarium, the biggest in the world at the point of construction. During the 1970s it was converted into a concert hall.

Wilhelm Kreis was a prominent German architect and professor of architecture, active through four political systems in German history: the Wilhelmine era, the Weimar Republic, the Third Reich, and the foundation of the Federal Republic. 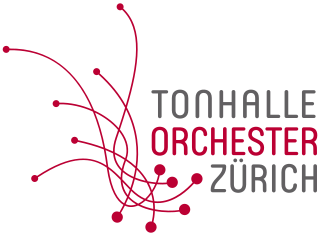 The Tonhalle-Orchester Zürich is a Swiss symphony orchestra based in Zürich. Its principal residence is the Tonhalle concert hall.

The Philharmonia Hungarica was a symphony orchestra, based in Marl, Germany, which existed from 1956 to 2001.

Golzheim, a borough of Düsseldorf in District 1 on the Rhine, just north of the city center, is primarily a business and hotel district, but retains some of the old stately villas.

Pempelfort is a city part in the North-east of the central District 1 of Düsseldorf.

Tonhalle is a German word meaning "tone hall", a concert hall. It may refer to:

Für Immer is a double DVD video album by hard rock singer Doro Pesch, released in 2003 by SPV/Steamhammer. The first DVD contains the full concert given at The Cave in Balve, Germany, during the Fight tour in 2002 and a collection of all Doro's videos. The second DVD, instead, contains three documentaries and live footage taken in various places and moments of Doro's career, including her first experience with a symphonic orchestra. 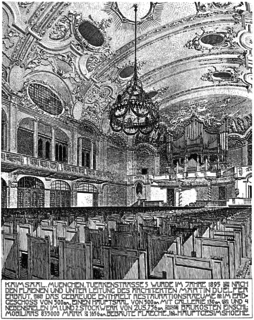 Kaim-Saal was a concert hall in Maxvorstadt, Munich, Germany. Built in 1895, it was rename Tonhalle in 1905. It was destroyed in 1944 in the Bombing of Munich in World War II.

The Tonhalle is a concert hall in Zurich, home to the Tonhalle-Orchester Zürich, one of Switzerland's leading orchestras. The 1455-seat hall, located at Claridenstrasse 7 in Zurich, was inaugurated in 1895 by Johannes Brahms. The hall is considered to be "acoustically superb". Since 1939, it is part of the building complex Kongresshaus Zürich.

Lionel Bringuier is a French conductor, cellist and pianist.

Philharmonia Zurich is the orchestra of Zurich Opera. As an independent body of 116 contract players, it has existed since 1985 under the name of Zurich Opera Orchestra. It was renamed in 2012 with the appointment of director Andreas Homoki and general music director Fabio Luisi. 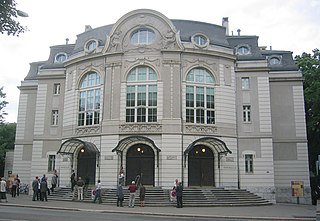 Tonhalle St. Gallen is a concert hall in St. Gallen, Switzerland. It is a cultural centre, a venue for concerts, banquets and meetings. It is the home of the St. Gallen Symphony Orchestra. 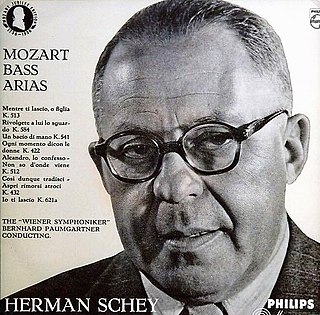