Antonio "Toni" Elías Justícia (born 26 March 1983) is a professional motorcycle racer and inaugural champion of the Moto2 World Championship. He is the third member of the Elías family to compete in motorcycle racing. He currently rides a Suzuki GSX-R1000 in the MotoAmerica AMA Superbike Championship, where he finished 3rd in the 2016 season, with 6 wins out of 18 and 304 points, 7 less than champion Cameron Beaubier. [1] He won the championship in the 2017 season. In 2018 he finished as runner-up behind champion Cameron Beaubier and in 2019 he finished as runner-up, 5 points behind championship winner, once again Beaubier.

In 2005 he entered MotoGP for Fortuna Yamaha. In 2006 and 2007 his Fortuna backing has got him a ride for Gresini Honda alongside 2005 runner-up Marco Melandri. He only took one podium in 2006, albeit his first, and so far only, win in the top category. After a podium in the first half of 2007 he crashed at Assen, breaking his leg, sabotaging his season. He managed to make a return to the podium at Motegi.

After spending the 2008 season with the Alice Ducati team, Elias returned to Gresini Honda for 2009, replacing Shinya Nakano to ride alongside Alex de Angelis. [3]

For 2010 he moved down to the new Moto2 class, on a Moriwaki bike for Gresini. He was competitive in pre-season testing before a heavy crash threatened to derail his status as title favourite. [4] He was victorious at Le Mans after a chaotic race also led by Alex Debón and Jules Cluzel. [5] He claimed the lead in the championship following this win, and would not relinquish it for the remainder of the season, clinching the inaugural Moto2 World Championship at the Malaysian Grand Prix with three rounds to spare. [6]

He returned to the MotoGP grid in 2011 with Team LCR, riding a Honda RC212V. [7] 2011 heralded his worst season in the MotoGP class, scoring only 61 points and finishing 15th in the Championship. He left Team LCR, and will return to Moto2 in 2012 with the Aspar Racing Team, a team he rode for in the 250cc class. After Mugello race team and rider ended his relationship.

On 24 July 2012, Pramac Ducati announced that Elias would replace the injured Hector Barbera until he was deemed fit to race. He raced a Satellite version of the GP12. At Laguna Seca he qualified 17th and retired during the race. He was scheduled to ride at Indianapolis but Barbera decided he wanted to return early, however Barbera suffered a high-side in Practice and injured his leg once more. Elias substituted for him until San Marino.

Elías won his first premier class race on 15 October 2006 with a fantastic final lap of the Portuguese MotoGP at Estoril. Elías had started the lap in third place, but an aggressive braking move into Curva 1, moved him past Valentino Rossi and the then-leader Kenny Roberts, Jr. into the lead. He actually clipped Roberts while braking, and this loss of momentum meant that Rossi passed Roberts for second position. These positions held until the chicane (turns 9 and 10) near the end of the lap. It looked like Elías had left the door wide open for Rossi and the reigning world champion dived to the inside to pass the Spaniard.

However, Elías would keep pressuring Rossi, trying to pass him on the run towards turns 11 and 12. Rossi had the line and kept the position, and it seemed as if Rossi would be 13 points clear of title rival Nicky Hayden going to the final round in Valencia. But Elías kept the speed up through the thirteenth and final turn, and tucked in behind Rossi, to draft him alongside the Italian. In a finish that needed a video replay, Elías was given the race by just 0.002 seconds. It was one of the closest finishes in the history of MotoGP, and a great way for Elías to secure his maiden premier class victory. This victory helped secure him a contract extension, which was doubtful prior to the win at Estoril, with Honda and Fausto Gresini for the 2007 Moto GP season. Elías was the last non-factory rider to win a race until Jack Miller won for the Marc VDS Racing Team at the 2016 Dutch TT.

As it turned out, Elías' victory cost Rossi five points, which was the exact number of points that Rossi would finish behind Hayden in the Championship standings.

All statistics according to MotoGP.com [8]

Nicholas Patrick Hayden, nicknamed "The Kentucky Kid", was an American professional motorcycle racer who won the MotoGP World Championship in 2006. Hayden began racing motorcycles at a young age. He began his road racing career in the CMRA before progressing to the AMA Supersport Championship and then to the AMA Superbike Championship. He won the AMA title in 2002 and was approached by the Repsol Honda team to race for them in MotoGP. 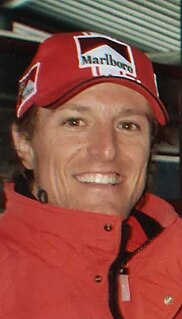 Manuel "Sete" Gibernau Bultó is a Spanish former professional Grand Prix motorcycle road racer. His racing career spans three different eras of motorcycle racing, beginning with the two-stroke-dominated period prior to the 2002 season, and the four-stroke MotoGP era. He returned to racing in 2019 to compete in the electric-powered MotoE World Cup. Gibernau was one of the top riders in Grand Prix racing at the beginning of the MotoGP era.

Marco Melandri is an Italian former motorcycle road racer. After winning the 2002 250 cc World Championship, he competed in the MotoGP class from 2003 to 2010, claiming five wins and finishing second overall in 2005.

The 2002 Grand Prix motorcycle racing season was the 54th Fédération Internationale de Motocyclisme (FIM) Road Racing World Championship season. The season consist of 16 races, which started with the Japanese Grand Prix on 7 April and ended with the Valencian Community Grand Prix on 3 November.

Andrea Dovizioso is an Italian professional motorcycle racer who currently competes in the MotoGP world championship for the factory Ducati Corse team. He won the 125cc World Championship in 2004. He also finished third in the MotoGP class in 2011 and is a three-time runner-up in the premier class, after finishing second to Marc Márquez in 2017, 2018, and 2019. 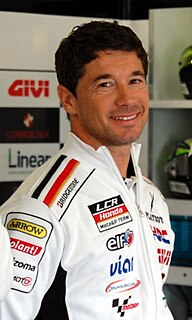 Marco Simoncelli, known as Sic, was an Italian professional motorcycle racer. He competed in the MotoGP World Championship for 10 years from 2002 to 2011. He started in the 125cc class before moving up to the 250cc class in 2006. He won the 2008 250cc World Championship with Gilera. After four years in the intermediate class, he stepped up to the top MotoGP class in 2010, racing with the Honda Gresini Team. Simoncelli died in an accident during the 2011 Malaysian Grand Prix at Sepang on 23 October 2011 after being run over following his own fall on track.

Andrea Iannone is an Italian professional motorcycle racer who currently is on a hiatus from the world championship at MotoGP level, for Aprilia Racing Team Gresini because of a doping ban .

Stefan Bradl is a German motorcycle racer. He is the 2011 Moto2 World Champion, and the son of former racer Helmut Bradl. In 2017, Bradl competed in the Superbike World Championship, where he rode a Honda CBR1000RR. He is currently a test rider for Repsol Honda Team in MotoGP.

The 2011 Grand Prix motorcycle racing season was the 63rd F.I.M. Road Racing World Championship season. The 2011 season was also the final season for 800cc engines in MotoGP, and also for 125cc machinery, as both MotoGP switched back to 1000cc engines and a new four-stroke Moto3 class was also introduced in 2012. Casey Stoner was crowned as MotoGP World Champion for the second time, following his ninth victory of the season at the Australian Grand Prix. Stoner, who was champion previously in 2007, finished 16 of the 17 races to be held in the top three placings – equalling a premier class record held by both Valentino Rossi and Jorge Lorenzo – including ten wins to become the final 800cc champion before the premier class reverted to 1000cc engines in 2012. As of 2019, this was the last time the premier class was won by a non-European rider, and also the only season in the 2010s decade that the premier class was won by a rider other than Marc Márquez or Jorge Lorenzo. The Moto2 title was decided before the final race of the season at the Valencian Grand Prix. Stefan Bradl became Germany's first motorcycle World Champion since Dirk Raudies won the 1993 125cc World Championship title after Marc Márquez, the only rider that could deny Bradl of the championship, was ruled out of the race due to injuries suffered during free practice at the Malaysian Grand Prix. The final 125cc world championship title went to Spain's Nicolás Terol, after he finished second in the final race of the season in Valencia, and his only title rival Johann Zarco crashed out during the early stages of the race. Terol, who finished third in the class in 2009 and second to Márquez in 2010, ended the season 40 points clear of Zarco, with Maverick Viñales 14 points further behind, after winning the final two races of the season. The season was marred by the death of Marco Simoncelli at the Malaysian Grand Prix.

Johann Zarco is a Grand Prix motorcycle racer from France, best known for winning the 2015 and 2016 Moto2 World Championships.

Jack Peter Miller is an Australian Grand Prix motorcycle racer, best known for being the championship runner-up in the 2014 Moto3 World Championship. He was the Winner of German IDM 125cc Championship in 2011. Miller won the 2016 Dutch TT on a privateer Honda. In 2018 he joined the Pramac team. There he secured a pole position and several podiums which eventually resulted in him earning a factory contract at Ducati for 2021 season.

The 2014 Grand Prix motorcycle racing season was the 66th F.I.M. Road Racing World Championship season. Marc Márquez started the season as the defending riders' champion in the MotoGP category, with Honda the defending manufacturers' champions. Pol Espargaró and Maverick Viñales were the reigning Moto2 and Moto3 champions respectively; however, neither defended their titles as both riders moved up a class, with Espargaró joining MotoGP and Viñales entering Moto2. 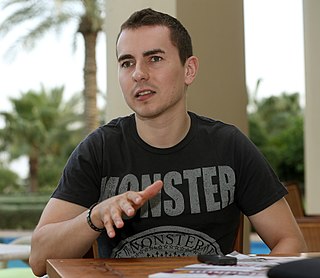