Toni Milanović is a Croatian Cruiserweight kickboxer fighting out of Split, Croatia.

On November 24, 2012, Milanović won Souboj Titánů, a four-man tournament under K-1 rules in Plzeň, Czech Republic. In the semifinals, Jan Tůma was two times in knockdown. In the final Keclik also suffered knockdown and Milanović he took deserved victory over David Keclik. He was awarded King of the titans title as the best fighter on the tournament, who was invited only one day before it happened. [1]

On December 9, 2012, he was scheduled to fight best Serbian kickboxer Nenad Pagonis on Supreme Fighting Championship organisation, but the opponent withdrew from the fight due to injury. However he faced much heavier Serbian fighter Dragan Jovanović; he weighed 104 kg (229 lb) and Milanović around 94 kg (207 lb). Jovanović was gold medalist in W.A.K.O. European Championships in Ankara, Turkey 2012. Milanović won the fight by unanimous judges' decision. The fight was held in Supreme FC organisation. [2] [3] [4]

He faced Jason Wilnis in a super fight at K-1 World Grand Prix 2012 Final in Zagreb, Croatia on March 15, 2013, in the -85 kg category. Before the fight he said: "May plan is to prove in the near future that I'm the best fighter in the world in this weight class". [5] At official weigh-ins, Milanović weighed 84.8 kg. [6] However, he lost the fight in the first round.

He took a unanimous decision victory over Ibrahim El Bouni at Final Fight Championship 3: Jurković vs. Cătinaș in Split, Croatia, on April 19, 2013. [7]

In 2012, Milanović was banned for 4 years by the Disciplinary Commission of the Croatian Muaythai Federation after in 2010 he tested positive for three banned substances, including boldenone, salbutamol and methylhexanamine. Initially, he was suspended for only 1 year by the same federation but World Anti-Doping Agency (WADA) appealed to the Court of Arbitration for Sport. [8]

Mladen Brestovac is a Croatian heavyweight and super heavyweight Muay Thai kickboxer, currently signed to Final Fight Championship, where he is the current FFC Heavyweight champion, and GLORY. He previously competed in K-1 and SUPERKOMBAT.

Ivan Strugar is a Montenegrin kickboxer. He is a winner of numerous trophies and accolades both in amateur and professional competition, and is one of the most popular sportsmen in Montenegro. He currently fights in W.A.K.O Pro association, out of Ariston gym in Podgorica. He won his last match in Podgorica. He fought Beloni third time in his career, and lost the fight by third round knockout.

Nenad Pagonis is a Serbian cruiserweight kickboxer as of 2013 fighting out of Mike's Gym in Amsterdam, Netherlands and Team Pagonis in Novi Sad, Serbia. In 2010 he became W.A.K.O. Pro world champion. He won a number of world and European titles at amateur level.

The women's heavyweight Low-Kick division at the W.A.K.O. European Championships 2004 in Budva was the heaviest of the female Low-Kick tournaments and involved just three fighters. Each of the matches was three rounds of two minutes each and were fought under Low-Kick kickboxing rules.

Igor Jurković is a Croatian heavyweight kickboxer fighting out of Poreč, Croatia. He was 6 times Croatian national champion 2004, 2005, 2006 in Thai boxing, and kickboxing champion 2005 in full contact, 2005 and 2006 in low kick rules, and also was sparring partner of Mirko Cro Cop. He has fought in K-1 and he is under contract with Glory promotion.

Frank Muñoz is a Spanish heavyweight kickboxer fighting in the SUPERKOMBAT Fighting Championship where he is the 2013 SUPERKOMBAT World Grand Prix Tournament Champion. He is also the former WAKO-Pro K-1 European champion.

Tomáš Hron is a Czech kickboxer who has fought for the K-1, It's Showtime and SUPERKOMBAT promotions. Former Kings of The Ring, WKA and WKN champion and current Kings of The Ring heavyweight world champion.

Final Fight Championship (FFC) is an international fighting sports promotion company founded in 2003 by the FFC owner and CEO Orsat Zovko. The company has its headquarters in Las Vegas, Nevada, USA, as well as a European office in Zagreb, Croatia.

Dino Belosević is Croatian kickboxer, W.A.K.O. amateur champion of the world in 2011. 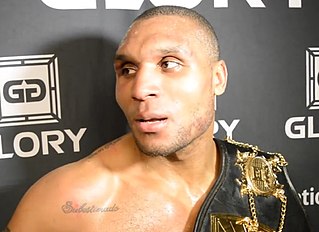 Jason Wilnis is a Dutch kickboxer. He is the last It's Showtime 85MAX champion and former Glory Middleweight Champion.

Dawid Kasperski is a Polish Muay Thai kickboxer. He first came to prominence due to a successful amateur career by taking gold at the Kick-Box World Cup in 2013 and silver at the WAKO World Championships in the same year. Kasperski signed with the professional kickboxing promotion SUPERKOMBAT Fighting Championship in 2014, winning the SUPERKOMBAT Light heavyweight Tournament Champion on his debut on April 12. He is also a 14-time Polish Champion in Muay Thai, K-1 and kickboxing and Polish Professional Champion in K-1.

Antonio Plazibat is a Croatian heavyweight kickboxer, winner of the 2017 K-1 Heavyweight Grand Prix. He also fought in SUPERKOMBAT and FFC. He is currently signed with Glory, where he is the #6 ranked heavyweight, as of December 2020.