The IMAX Corporation is a Canadian theatre company which designs and manufactures IMAX cameras and projection systems as well as performing film development, production, post production and distribution to IMAX affiliated theatres worldwide. Founded in 1967, it has headquarters in the Toronto area, and operations in New York City and Los Angeles.

Interstellar is a 2014 epic science fiction film directed, co-written and co-produced by Christopher Nolan. It stars Matthew McConaughey, Anne Hathaway, Jessica Chastain, Bill Irwin, Ellen Burstyn, and Michael Caine. Set in a dystopian future where humanity is struggling to survive, the film follows a group of astronauts who travel through a wormhole near Saturn in search of a new home for humanity.

Destiny in Space is a 70mm Canadian IMAX documentary film released in 1994. The film was written by Toni Myers, directed by Academy Award-winner Ben Burtt, and narrated by Leonard Nimoy.

Laeta Elizabeth Kalogridis is an American screenwriter and television and film producer. She has written scripts for Alexander (2004), Night Watch (2004), Pathfinder (2007) and Shutter Island (2010). She also served as an executive producer for the television series Birds of Prey and Bionic Woman, and she co-wrote the screenplay for Terminator Genisys (2015) and Alita: Battle Angel (2019). She is the creator and executive producer of the Netflix series Altered Carbon (2018).

Blue Planet is a 1990 IMAX film directed by Ben Burtt, and produced by the IMAX Space Technology corporation for the Smithsonian Institution's National Air and Space Museum, as well as Lockheed Corporation. Filmed with the cooperation of the NASA, it was written, edited, and narrated by Toni Myers. 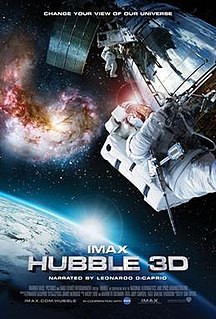 Hubble is a 2010 American documentary film about Space Shuttle missions to repair and upgrade the Hubble Space Telescope. It is narrated by the actor Leonardo DiCaprio. 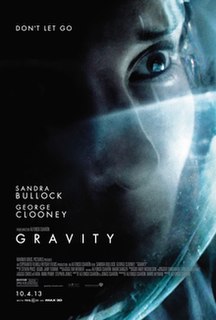 Gravity is a 2013 science fiction thriller film directed by Alfonso Cuarón, who also co-wrote, co-edited and produced the film. It stars Sandra Bullock and George Clooney as American astronauts who are stranded in space after the mid-orbit destruction of their Space Shuttle, and attempt to return to Earth.

Doctor Strange is a 2016 American superhero film based on the Marvel Comics character of the same name. Produced by Marvel Studios and distributed by Walt Disney Studios Motion Pictures, it is the fourteenth film in the Marvel Cinematic Universe (MCU). The film was directed by Scott Derrickson from a screenplay he wrote with Jon Spaihts and C. Robert Cargill, and stars Benedict Cumberbatch as surgeon Stephen Strange along with Chiwetel Ejiofor, Rachel McAdams, Benedict Wong, Michael Stuhlbarg, Benjamin Bratt, Scott Adkins, Mads Mikkelsen, and Tilda Swinton. In the film, Strange learns the mystic arts after a career-ending car crash. 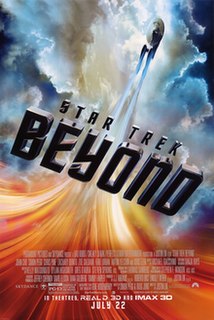 Star Trek Beyond is a 2016 American science fiction action film directed by Justin Lin, written by Simon Pegg and Doug Jung, and based on the television series Star Trek created by Gene Roddenberry. It is the 13th film in the Star Trek film franchise and the third installment in the reboot series, following Star Trek (2009) and Star Trek Into Darkness (2013). Chris Pine and Zachary Quinto reprise their respective roles as Captain James T. Kirk and Commander Spock, with Pegg, Karl Urban, Zoe Saldana, John Cho, and Anton Yelchin reprising their roles from the previous films. This was one of Yelchin's last films before his death in June 2016. Idris Elba, Sofia Boutella, Joe Taslim, and Lydia Wilson also appear.

DC Extended Universe (DCEU) is an unofficial term used to refer to an American media franchise and shared universe that is centered on a series of superhero films, distributed by Warner Bros. Pictures and based on characters that appear in American comic books by DC Comics. The shared universe, much like the original DC Universe in comic books and the television programs, was established by crossing over common plot elements, settings, cast, and characters. The films have been in production since 2011 and in that time Warner Bros. has distributed eight films, with a multitude of other planned films in various stages of development. It is the eleventh highest-grossing film franchise of all time, having grossed over $5.42 billion at the global box office. Its highest-grossing film is Aquaman, which earned over $1.15 billion worldwide, becoming the highest grossing DC film to date. 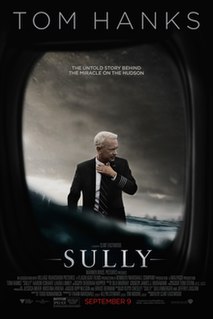 Sully is a 2016 American biographical drama film directed by Clint Eastwood and written by Todd Komarnicki, based on the autobiography Highest Duty by Chesley Sullenberger and Jeffrey Zaslow. Tom Hanks stars as Sullenberger, with Aaron Eckhart, Laura Linney, Anna Gunn, Autumn Reeser, Holt McCallany, Jamey Sheridan, and Jerry Ferrara in supporting roles. The film follows Sullenberger's January 2009 emergency landing of US Airways Flight 1549 on the Hudson River, in which all 155 passengers and crew survived with only minor injuries, and the subsequent publicity and investigation.

Godzilla vs. Kong is an upcoming American monster film directed by Adam Wingard. A sequel to Godzilla: King of the Monsters (2019) and Kong: Skull Island (2017), it is the fourth film in Legendary's MonsterVerse. The film is also the 36th film in the Godzilla franchise, the 12th film in the King Kong franchise, and the fourth Godzilla film to be completely produced by a Hollywood studio. The film stars Alexander Skarsgård, Millie Bobby Brown, Rebecca Hall, Brian Tyree Henry, Shun Oguri, Eiza González, Jessica Henwick, Julian Dennison, Kyle Chandler, Zhang Ziyi, and Demián Bichir. 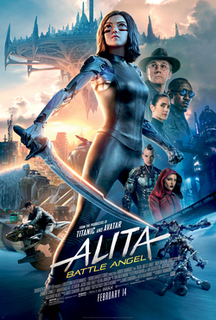 Alita: Battle Angel is a 2019 American cyberpunk action film based on Japanese manga artist Yukito Kishiro's 1990s series Gunnm and its 1993 original video animation adaptation Battle Angel. It was directed by Robert Rodriguez and produced by James Cameron, who co-wrote the script with Laeta Kalogridis. Rosa Salazar stars through performance-capture animation as the titular heroine Alita, a cyborg who awakens in a new body with no memory of her past, so she sets out to uncover her destiny. Christoph Waltz, Jennifer Connelly, Mahershala Ali, Ed Skrein, Jackie Earle Haley, and Keean Johnson star in supporting roles.

The MonsterVerse is an American multimedia franchise and shared fictional universe that is centered on a series of monster films featuring Godzilla and King Kong, produced by Legendary Entertainment and co-produced and distributed by Warner Bros. The first installment was Godzilla (2014), a reboot of the Godzilla franchise, which was followed by Kong: Skull Island (2017), a reboot of the King Kong franchise, and Godzilla: King of the Monsters (2019). The next film to be released will be Godzilla vs. Kong (2020). With three films released to date, the series has grossed over $1.4 billion worldwide.

A Beautiful Planet is a 2016 American documentary film that explores Earth by showing IMAX footage that was recorded over the course of fifteen months by astronauts aboard the International Space Station. It is narrated by actress Jennifer Lawrence.

Dune is an upcoming 2020 epic science fiction adventure film directed by Denis Villeneuve with a screenplay by Eric Roth, Jon Spaihts and Villeneuve. It is an international co-production of the United States, United Kingdom, Canada, and Hungary and it is the first of a planned two-part adaptation of the 1965 novel of the same name by Frank Herbert, and will cover roughly the first half of the book. The film stars an ensemble cast including Timothée Chalamet, Rebecca Ferguson, Oscar Isaac, Josh Brolin, Stellan Skarsgård, Dave Bautista, Zendaya, David Dastmalchian, Stephen McKinley Henderson, Charlotte Rampling, Jason Momoa and Javier Bardem.

Wonder Woman 1984 is an upcoming American superhero film based on the DC Comics character Wonder Woman. It is the sequel to 2017's Wonder Woman and the ninth installment in the DC Extended Universe (DCEU). The film is directed by Patty Jenkins from a script she wrote with Geoff Johns and David Callaham, and a story by Johns and Jenkins, and stars Gal Gadot as Diana Prince / Wonder Woman, alongside Chris Pine, Kristen Wiig, Pedro Pascal, Robin Wright, and Connie Nielsen in supporting roles. It will be the fourth live-action theatrical film featuring the title character, following Batman v Superman: Dawn of Justice (2016), Wonder Woman, and Justice League (2017); it will also be the second full-length feature film centered around the character. The film follows Diana as she faces Maxwell Lord and Cheetah in 1984.