Toni Storaro (Bulgarian : Тони Стораро) (born in Shumen, Bulgaria, on 2 August 1976) [1] is a Bulgarian artist of turkish origin. He is a leading performer on the Bulgarian music label Diapason Records (Bulgarian : Диапазон Рекърдс).

Toni Storaro, born Tuncher Fikret Ali, has established himself as one of the established names in Bulgarian popular and chalga music. A prolific artist, in 15 years, he produced 11 albums in Bulgarian and Turkish languages and around 30 hits. He is known for his warm, rich, deep and unique voice with rich ornamentation mixing various Balkan influences (Bulgarian, Turkish, Greek and Serb). His 2005 album "For a woman" (Bulgarian : За една жена) with various Balkan songs recorded in Germany was a huge hit with multiple singles and an eventual "Виртуозно майсторство" (virtuoso mastery) coveted award at the 8th Annual Awards for New "Folk" (Bulgarian : Годишни награди на "Нов фолк"). In 2007 came awards for Best Artist at the First Fan TV (Фен ТВ) Music Awards and Best Singer Award at the 10th Annual Awards for "New Folk".

He has had collaborations with Yordanka Hristova, Djansever, Sofi Marinova, Tanya Boeva, Teodora and Bulgaria's icon Azis, as well as Serbian Jovana Tipšin and Turkish Burak Aziz. He also enjoys immense popularity abroad among Bulgarian and Balkan diaspora, with many tours in Greece, Turkey, Spain, Belgium, Netherlands, Germany, Canada and the United States. Many of his songs have been covered by other Balkan artists, most notably by Serbian Dragana Mirković and Macedonian Toše Proeski and others. He was given a huge reception in Turkey on 2 June 2006 singing in the Turkish megastar Tarkan's concert. He followed that with a big concert in Greece where his voice is usually compared to that of Greek star Vasilis Karras and dubbed "Bulgaria's Karras". His famous song "For a Woman" (Bulgarian : "За една жена") was interpreted on the second season of Bulgarian Music Idol . 2008 saw the release of his 11th album with all brand new songs, that brought him again awards for Best Artist at the 2nd Fan TV (Фен ТВ) Music Awards, Best Singer at the 11th Annual Awards for "New Folk" as well as the title for "Best Singer of Love Songs" on radio station Romantica.

Emiliya Bashur, known by her stage name Emilia, is a Bulgarian pop folk singer. She has released eight studio albums to date.

Mariana Popova is a Bulgarian singer. She is known for representing Bulgaria at the Eurovision Song Contest 2006, trainer on The Voice of Bulgaria 2011 and from Vip Brother 2012 – Bulgaria

Sofiya Marinova Kamenova, better known as Sofi Marinova is a Bulgarian pop-folk and ethno-pop singer of Romani descent. She is one of the most popular singers in Bulgaria, famed for her extreme five-octave vocal range. She has won multiple music awards and contests. She is often called "the Romani pearl" and "the Romani nightingale". In February 2012 she won the Bulgarian Eurovision national final with the song "Love Unlimited", thus becoming the representative of Bulgaria in the 2012 Eurovision Song Contest in Baku, Azerbaijan.

Galina Peneva Ivanova, born June 28, 1973), known professionally as Gloria, is a Bulgarian singer, sometimes referred to as the "Prima of Bulgarian pop-folk music". She was awarded the title Singer of the year in 1999, 2000, 2003 and 2004, and Singer of the decade in 2007. Gloria is the only representative of the pop-folk genre with 4 independent concerts in Hall 1 of the prestigious National Palace of Culture in Sofia. Anelia Georgieva Atanasova', known professionally as Anelia, is a Bulgarian pop-folk singer. She gained popularity in Bulgaria with her second single "Погледни ме в очите", released in 2002. Throughout her career, 23 of her singles have topped the Bulgarian music charts which makes her one of the most successful recording female artists in Bulgarian music. In 2012, for the first time in her career, Anelia won the Artist of the Year award at the Annual Music Awards of Planeta TV.

Miroslav Kostadinov is a Bulgarian singer and songwriter who represented Bulgaria in the Eurovision Song Contest 2010 with the song "Angel si ti".

Vlatko Ilievski was a Macedonian pop rock singer and actor. He was the runner-up to be the Macedonian entry for the Eurovision Song Contest 2010 and represented Macedonia in the Eurovision Song Contest 2011 with the song Rusinka in Düsseldorf, Germany. He was previously a member of the rock band "Moral". He was a student of acting at the faculty of Dramatic Arts, Skopje, where he graduated in 2010 with the drama "Anger" from Stephen King. 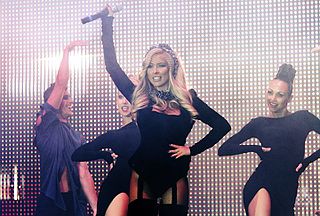 Teodora Rumenova Andreeva, better known by her stage name Andrea, is a Bulgarian pop-folk singer. She and the Romanian singer Costi Ioniță performed together and released music as Sahara. In 2013, BBC and Payam Forghani described her as a "pop-folk superstar". 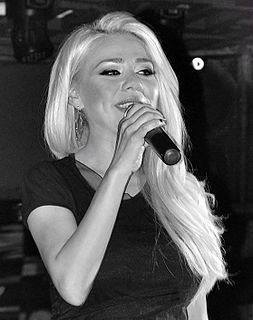 Gergana Georgieva Katsarska is a Bulgarian pop-folk singer, often referred to as "the Barbie doll of pop-folk". Her early career (2003–2004) was marked by the runaway success of her debut single "Губя те бавно" followed by a best-selling debut album.

"Love Unlimited" is a song performed by Bulgarian singer Sofi Marinova, which was chosen to represent Bulgaria at the Eurovision Song Contest 2012. The song contains the phrase "I love you" in ten languages.

Krum Sirakov or Krum is a Bulgarian pop and pop-folk singer. 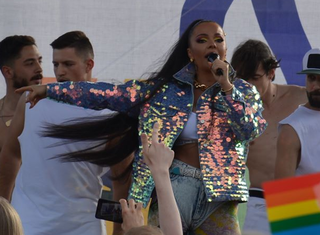 Desislava Ivanova Doneva, known by her stage name Desi Slava, is a Bulgarian singer-songwriter and producer. She was born on March, 7th, 1979 in Radnevo, Bulgaria. Her first stage appearances began at an early age, when she would win awards at festivals for children. Shortly afterwards, she became the soloist of "Radnevo" orchestra. This led to her being noticed by one of the most famous Bulgarian folklore singers of all time – Valkana Stoyanova, who took her under her wing, coached her and declared Desislava as her possible music heir.

Fikret Tuncher Fikret is a Bulgarian pop-folk singer of Turkish descent. He is the son of singer Toni Storaro.

Kamelia Vladimirova Veskova, better known only as Kamelia, is a Bulgarian singer, actress and TV presenter.