Tonic Sol-fa is an a cappella quartet from the Minneapolis–Saint Paul region. With a largely pop-music-oriented repertoire, their CDs have sold over 2,000,000 copies, [1] and the group has toured throughout the US and abroad.[ citation needed ]

Tonic Sol-fa began at St. John's University in Central Minnesota and includes lead vocalist Shaun Johnson, tenor and vocal percussionist Greg Bannwarth, and bassist Jared Dove. Together the group reached national prominence with appearances on NBC's Today Show and in Newsweek magazine. Along the way, they have shared the stage with performers including Jay Leno, Jeff Foxworthy and Lonestar, and were part of Garrison Keillor's 30th anniversary celebration of A Prairie Home Companion .

From the group's onset, the members have overseen and operated the business of Tonic Sol-fa, with only a small team of driven supporters acting as managers, lawyers, and publicists, and has increased revenue from a few thousand dollars in their first year to a multi-million dollar limited liability company today.[ when? ] The group has overcome a number of obstacles, including theft within the organization. Still, the group persevered, recording and manufacturing its own records and selling them to a growing legion of fans via the Internet and social networking sites, as well as in the lobby of the theaters where they perform and through a growing national distribution.

Their acapella blend has resulted in multiple contemporary recording awards, NACA (National Association of Collegiate Activities) Entertainer of the Year nominations, considerable national press, and has landed their music among the best selling seasonal DVD's at Wal-Mart. Tonic Sol-fa has established itself not only as an in-demand vocal group in the Midwest, but also as a successful independent act in America. In addition to substantial CD sales of its own independent releases (2,000,000 copies sold), the group has toured festivals and private shows extensively throughout the US and abroad, leading to numerous sold-out tours of theaters and small arenas.

In 2010, Tonic Sol-fa released their third television holiday special, which aired over 1800 times in forty-seven states and Canada. This special was shown on PBS through 2015.[ needs update ]

The Delfonics are an American R&B/soul vocal group from Philadelphia, Pennsylvania, United States. The Delfonics were most popular in the late 1960s and early 1970s. Their most notable hits include "La-La ", "Didn't I ", "Break Your Promise", "I'm Sorry", and "Ready or Not Here I Come ". Their hit songs were primarily written/composed and produced by lead vocalist and founding member William "Poogie" Hart and the musical instrumentation was arranged/conducted by songwriter and producer Thom Bell. 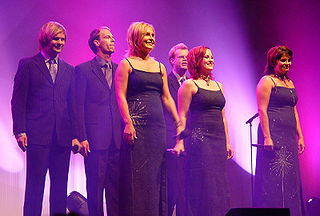 Rajaton is a Finnish a cappella ensemble, founded in Helsinki in 1997. The Finnish word rajaton means "boundless", to indicate the breadth of their repertoire, from sacred classical to near Europop. Rajaton performs primarily in Finland but also tours around Europe and the rest of the world, having performed in over 25 countries.

The King's Singers are a British a cappella vocal ensemble founded in 1968. They are named after King's College in Cambridge, England, where the group was formed by six choral scholars. In the United Kingdom, their popularity peaked in the 1970s and early 1980s. Thereafter they began to reach a wider American audience, appearing frequently on The Tonight Show Starring Johnny Carson in the United States. In 1987, they were prominently featured as guests on the Emmy Award winning ABC-TV special Julie Andrews: The Sound of Christmas.

Five O'Clock Shadow is an a cappella group from Boston, Massachusetts, that has been in existence since 1991. The band has performed on FOX News, A&E Network, ABC, ESPN and VH-1's "breakthrough" series. They have released four cassettes and six CDs, winning many Contemporary A Cappella Recording Awards.

The Nylons are an a cappella group founded in 1978 in Toronto, Ontario, Canada, best known for their covers of pop songs such as The Turtles' "Happy Together", Steam's "Na Na Hey Hey Kiss Him Goodbye", and "The Lion Sleeps Tonight".

Voice Male is a six-man contemporary a cappella group based in Utah. The group performs covers of contemporary popular songs as well as traditional Latter-day Saint music and some original material. Voice Male formed at Utah State University in 1994 as a nine-man group. Over the next two years several members of the group left, and auditions were held for replacements. A short time later two more members left, leaving the group with six members. Voice Male decided at that time to keep the group at six and they remained unchanged until 2010, when Phil Kesler died from cancer. Rick Murdock was officially added as a new member in 2011. Voice Male was the winner of the holiday album category in the 1999 Contemporary A Cappella Society for "Jingles", was runner up in the 2001 awards in the cover/pop song category for "Light in Your Eyes" from Hooked, was runner up in the 2006 awards in the holiday album category for Jingles 2, as well as the holiday song category for o come, o come Emmanuel. 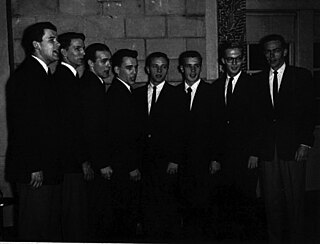 Middlebury's Dissipated Eight, also known as the D8, is the oldest a cappella group at Middlebury College. The group performs both nationally and internationally, at private venues, colleges, and high schools alike. Over the years, the group has arranged numerous contemporary and modern pieces, and now has more than 200 recorded covers of popular music. They generally do not use any instruments in their recordings, and instead carefully select different pitches to simulate the tones needed for each song. This often means recreating sounds such as the high-pitched tone of the fiddle in "The Devil Went Down To Georgia" or the bass and snare of the drum set in "All Along The Watchtower."

Denver and the Mile High Orchestra (DMHO) is a horn-driven band based out of Nashville, Tennessee. DMHO was formed by a group of friends at Belmont University in 1999. They have traveled across the world, playing at churches, conferences, and festivals. They have performed at two Olympic Games, and were the house band at the 2005 Gospel Music Association Music Awards. DMHO finished third on The Next Great American Band, a "battle of the bands" reality show that aired on Fox in late 2007.

Theatre of Voices is a vocal ensemble founded by baritone Paul Hillier in 1990; it focuses on early music and new music.

VOCES8 is an a cappella octet from the United Kingdom.

The Suspicious Cheese Lords, also known as Suscipe Quæso Domine, is an American male a cappella ensemble based in Washington, D.C. SCL is a wholly autonomous, professional ensemble and a 501(c)(3) not-for-profit organization whose mission is to stimulate interest in early music throughout the metropolitan Washington area and beyond. Secondarily, SCL has established a reputation for researching, recording, and promoting previously unrecorded works of Renaissance composers.

Lucky Seven is the second and sixth studio album released in North America and Japan, respectively, by the a cappella group Rockapella. As the name suggests, it is the seventh overall studio album by the group. While the Japanese version was awaiting release in the fall of 1996 on ForLife Records, the group independently released it in the United States beginning that summer to be sold at concerts and via mail order. The Japanese version, titled Lucky Seven: Memories and Dreams, has different artwork, a different track order, and three more songs than the US version. This album is also the last album with Rockapella's founding member Sean Altman before his departure from the group.

The King's Heralds is a male gospel music quartet that began in 1927 and have recorded over 100 albums encompassing 30 languages. They are primarily known for their a cappella singing and close harmony.

vocaldente are an a cappella quintet from Hanover, Germany.

Out Cold is the fifth studio and second holiday album by the a cappella group Rockapella. ForLife Records wanted the group to do a second Christmas album, but settled for a mixture of Christmas and non-holiday music. This combination has led it to be described as the "winter romance" album.

James "Jay" Johnson established himself as one of the top bass-baritone singers in the Detroit doo-wop and soul music scene during the pre-Motown years. He was a member of the Detroit group Nolan Strong & The Diablos and can be heard on the group's Fortune Records recordings from late 1956 on. 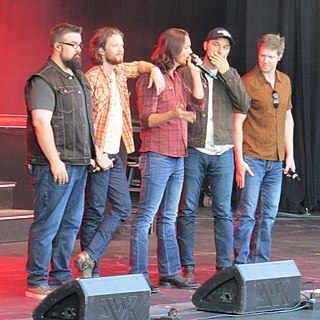 Home Free is an American a cappella group of five vocalists, Austin Brown, Rob Lundquist, Adam Rupp, Tim Foust, and Adam Chance. Starting as a show group, they toured around 200 shows a year across the United States.

Maybebop is a German male a cappella quartet consisting of founding member Oliver Gies, Jan Malte Bürger, Lukas Teske and Sebastian Schröder. The group sings predominantly German-language self-compositions, although it has released cover versions of rock hits such as "Nothing Else Matters", "Smells Like Teen Spirit" and "Bohemian Rhapsody". In addition, the group has released jazz adaptations of folk and Christmas songs like "Abendlied", "Die Gedanken sind frei" and "Still, still, still".

Vadé is a British a cappella R&B quintet formed by Philip Yeboah and JJ Hammersley in the summer of 2013. The band's musical influences include Boyz II Men, Naturally 7 and Take 6.

DCappella is an a cappella group formed via a national search and run by Disney Music Group featuring Disney songs. Deke Sharon is DCappella’s co-creator, music director, arranger and producer.