Antônio Aparecido Firmino (born September 21, 1971), better known as Toninho do Diabo (Tom of the Devil) or Devil Tony, is an alleged Brazilian religious, who identifies himself as a disciple of the devil, and calls itself the Ambassador of Lucifer on Earth and is therefore considered by the media as one of the greatest leaders of Brazil Satanists. [1] [2]

He has participated in many television programs and met with various religious, as Inri Cristo and Óscar González-Quevedo. [3]

It is also a singer, songwriter, actor, screenwriter, producer and director of movies online, and carnival leader, being president of samba school Império do Vale do Sol (Empire of the Sun Valley) [4] [5]

He became famous, however, in the 2000s, when the video clip of one of his most famous songs, Brazilian Prophecies was presented in the defunct MTV show, Worst Clips of the World and was very successful. [3] More known by the refrain "I put on fire" in the song, Tom makes a major criticism of various segments of society. [6]

In 2014 general elections, he ran unsuccessfully for Federal Deputy for São Paulo by Solidarity (SD). 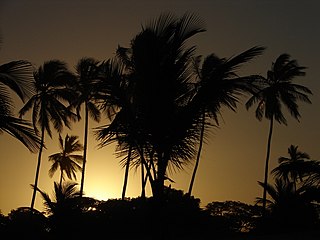 The Ibirapuera Auditorium is a building conceived by Oscar Niemeyer for the presentation of musical spectacles, situated in Ibirapuera Park in São Paulo.

Universidade Bandeirante de São Paulo (UNIBAN) is a private university in São Paulo, Brazil. It is one of the largest institutions of higher learning in the country, with approximately 75,000 undergraduate and graduate students and thirteen campuses in the cities of São Paulo, Osasco and São Bernardo do Campo. Uniban is owned by Anhanguera Educacional, the biggest for-profit educational company in Brazil.

Henricosborniidae is a family of extinct notoungulate mammals known from the Late Paleocene to Early Miocene of Argentina, Bolivia and Brazil. The name honors U.S. paleontologist Henry Fairfield Osborn.

Décio Pignatari was a Brazilian poet, essayist and translator.

"The World We Live In" is a song by American rock band The Killers, taken from the band's third studio album Day & Age (2008), it was released as the third single in the UK and Europe. In North America and the rest of the world, "A Dustland Fairytale" is the third single. 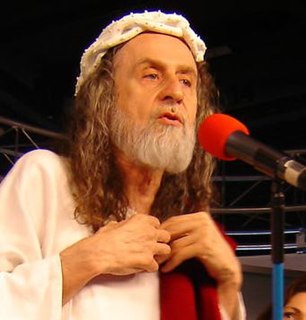 Álvaro Thais, better known by his nickname Inri Cristo, is a Brazilian self-proclaimed religious leader who claims to be the reincarnation of Jesus. Álvaro was raised in the interior of Blumenau and became an audio operator to a local radio station. He later moved to Curitiba, where he became famous as a persona in comedy television programs, getting to participate in a widely circulated advertising campaign.

Avenida Brasil is a Brazilian primetime telenovela created by João Emanuel Carneiro. It premiered on 26 March 2012 and ended on 19 October 2012 on Rede Globo at 9 pm timeslot.

Celebridade is a Brazilian telenovela that was produced and aired by TV Globo from October 13, 2003 to June 25, 2004, totaling 221 episodes. 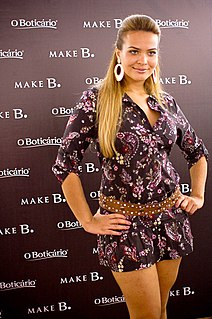 Geisy Arruda is a Brazilian reality television star who became known while a student at Universidade Bandeirante de São Paulo when her wearing a skirt caused a riot. Her eventual expulsion and re admittance was then followed by her decision to not return to the school.

Lorena Braga Gomes Simpson, is a Brazilian singer-songwriter and dancer. She became famous in Brazil for the hits "Can't Stop Loving You" and "Brand New Day". Simpson is a pioneer in Brazil, bringing performances to an international standard level using dancers and live singing. She proved to the industry that it could be possible to innovate and create something different for her fans. She inspired many Brazilian artists of the new generation. Her music has been played all over the world and she is recognized as the "Brazilian diva" in the electronic music scene.

Carolina Cano Frayssinet is a Peruvian actress and dancer of French descent. 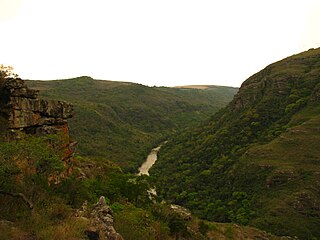 The Guartelá Canyon is a canyon in Tibagi and Castro, Paraná, Brazil. The canyon of the Iapó River is protected by the 799 hectares Guartelá State Park, created in 1992.