Sword-and-sandal, also known as peplum, is a subgenre of largely Italian-made historical, mythological, or Biblical epics mostly set in the Greco-Roman or medieval period. These films attempted to emulate the big-budget Hollywood historical epics of the time, such as Ben-Hur, Cleopatra, Quo Vadis, The Robe, Spartacus, Samson and Delilah and The Ten Commandments. These films dominated the Italian film industry from 1958 to 1965, eventually being replaced in 1965 by the spaghetti Western and Eurospy films.

Bruno Nicolai was an Italian film music composer, orchestra director and musical editor most active in the 1960s through the 1980s.

John Steiner is an English actor. Tall, thin and gaunt, Steiner attended the Royal Academy of Dramatic Art, worked for a few years at the BBC and later appeared mostly in Italian films.

The Quentin Tarantino Film Festival, or QT-Fest, was a semi-annual film and multimedia event held by the Austin Film Society in Austin, Texas and attended by film director Quentin Tarantino, where he screened a selection of his favorite films using prints he owns.

Armando Trovajoli was an Italian film composer and pianist with over 300 credits as composer and/or conductor, many of them jazz scores for exploitation films of the Commedia all'italiana genre. He collaborated with Vittorio De Sica on a number of projects, including one segment of Boccaccio '70. Trovajoli was also the author of several Italian musicals: among them, Rugantino and Aggiungi un posto a tavola.

Franco Fraticelli was an Italian film editor with more than 150 film credits. Fraticelli was director Dario Argento's editor of choice from his earliest films through Opera (1987).

Rik Battaglia was an Italian film actor. He was born at Corbola, near Rovigo, Veneto. He mainly used the stage name of Rik Battaglia although alternate names he used for his films included Rick Austin, Riccardo Battaglia and Rick Battaglia. He would go on to appear in over 100 films from the 1955 to 1999. 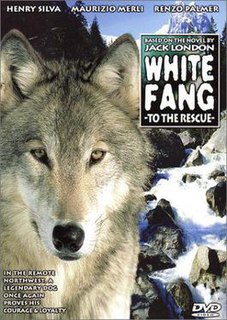 Zanna Bianca alla riscossa is a 1974 Italian adventure film directed by Tonino Ricci. It is an unofficial sequel of Lucio Fulci's 1973 film White Fang, in which Ricci was second unit director. The film received mixed reviews. 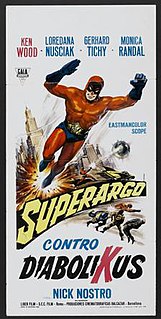 Superargo Versus Diabolicus is a 1966 superhero film written and directed by Nicola Nostro. It had the sequel in 1968, Superargo and the Faceless Giants directed by Paolo Bianchini.