Tonita Peña (born May 10, 1893 in San Ildefonso – died September 9, 1949 in Santo Domingo Pueblo [1] ) born as Quah Ah (meaning white coral beads) but also used the name Tonita Vigil Peña and María Antonia Tonita Peña. [2] Peña was a renowned Pueblo artist, specializing in pen and ink on paper embellished with watercolor. [1] She was a well-known and influential Native American artist and art teacher of the early 1920s and 1930s. [2]

Tonita Peña was the daughter of Ascensión Vigil Peña and Natividad Peña of San Ildefonso Pueblo, New Mexico [1] but at age 12, her mother and younger sister died, as a results of complications due to the flu. [3] Her father was unable to care for her and she was taken to Cochití Pueblo and was brought up by her aunt, Martina Vigil Montoya, a prominent Cochití Pueblo potter. [3] [4] Tonita married four times and had six children. [1] Peña's first marriage was at the age of 15, arranged by village elders to Juan Chavez. [3] She had two sons, who were raised by their Aunt while Peña finished school. In 1913 Peña has a second arranged marriage to fine art painter Joe Hilario Herrera who died in a mining accident, [1] [3] followed by Epitacio Arquero, whom she married in 1922. [5]

In the 1930s Peña was an instructor at the Santa Fe Indian School and at the Albuquerque Indian School [1] and the only woman painter of the San Ildefonso Self-Taught Group, which included such noted artists as Alfonso Roybal, Julian Martinez, Abel Sánchez, Crecencio Martinez, and Encarnación Peña. [6] [7] As children, these artists attended San Ildefonso day school which was part of the institution of the Dawes Act of 1887, designed to indoctrinate and assimilate Native American children into mainstream American society. [8]

Edgar Lee Hewett, an anthropologist involved in supervising the nearby Frijoles Canyon excavations (now Bandelier National Monument) was instrumental in developing the careers of several San Ildefonso “self taught” artists including Tonita Peña. Hewett purchased Peña's paintings for the Museum of New Mexico and supplied her with quality paint and paper. [8]

Peña began gaining more notoriety by the end of the 1910s selling an increasing amount to her work to collectors and the La Fonda Hotel. Much of this early work was done of traditional subject matter, in a style inspired by historic Native American works, however her use of an artists easel and western painting mediums gained her acceptance amongst her white contemporaries in the art world. At the age of 25 her work was being shown at museums and galleries in the Santa Fe and Albuquerque area. [9] In the early 1920s Tonita did not know how much her painting sold for at the Museum of New Mexico so she wrote letters to the administrators because a local farmer was worried that she got paid to little. [10]

In 1931, Tonita Peña exhibited at the Exposition of Indian Tribal Arts which was presented at the Grand Central Art Galleries in New York City. [2] [11] By 1932, the Whitney Museum in New York bought Peña's painting Basket Dance for $225. This was the highest price paid up to this time for a Pueblo painting and most Native American paintings at this time were selling between $2 to $25. [2]

She died on September 9, 1949 of cancer after unsuccessful radiation therapy on her adrenal glands. [12] At Peña's death, all of her remaining paintings and personal effects were burned in compliance with Pueblo customs. [1] [3] [12]

Peña did not accept the traditional roles of women in arts within Native American culture. She focused primarily on two-dimensional works on paper rather than the more socially accepted pottery and ceramic mediums of her contemporaries. [3] Beyond the choice of what medium she used, Peña's subject matter also pushed gender boundaries. At the time she was active, only men were allowed to portray living individuals in their work. [13] Another way Peña rejected traditional roles of women was how she approached her role as a mother. Contrary to the traditions of her tribe and America at large, she chose to have others raise some of her children, so that she could focus on completing her education and also furthering her career. During her lifetime, the U.S. government pushed the idea of assimilating Native Americans within American culture. Peña's artwork emerged as a site of resistance towards those efforts, reaffirming the importance of ceremonial dances as crucial for Puebloan cultural survival. [14]

Critique of Peña can be found within the framework of studying "traditional" Native American art, versus "White patronage" supported art of Native American art. [15] Artwork made by Native Americans and collected by White patrons served no traditional function for in Native American communities. [16] Peña's critics were not only the established art world, but also her own tribe. Many of Peña's paintings depicted sacred rituals and her fellow tribespeople believed these were inappropriate subject matters to portray and share outside the tribe. [3] [17] Epitacio Arquero, Governor of the Pueblo and Peña's husband at the time of the most heated protests, defended the subject matter saying her paintings only depicted subject matter already visible to outsiders. Following the controversy, Peña's work changed to focus on Pueblo culture and traditions that were not sacred or private in nature. [3]

Native arts (traditional crafts, dance, music as well as modern techniques like Peña's pen and ink with watercolor on paper) was a factor in modern Euro-Americans' changing perspective of the aesthetic and spiritual value of Native American culture and identity. [16] Peña's artwork emphasized the role of women in everyday life and is credited with expanding the expectations of women in art by refusing to limit herself to the traditional female role of potter. [17] Her son Joe Herrera, heavily influenced his mother, became an important figure in American modernism. [18] Peña's artwork is part of the collections at the American Museum of Natural History in New York, the Cleveland Museum of Art in Ohio, the Cranbrook Institute of Science in Michigan, the Heard Museum in Arizona, the Dartmouth College Collection in New Hampshire, the Haffenreffer Museum of Anthropology at Brown University, and the Peabody Museum at Harvard. [13] [17] She has continued to have national art exhibitions posthumously. [17] A crater on the planet Venus has been named after Tonita Peña. [19] 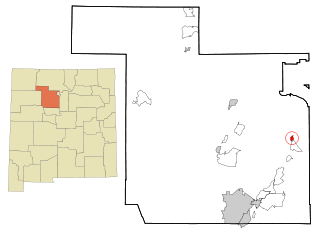 Cochiti is a census-designated place (CDP) in Sandoval County, New Mexico, United States. A historic pueblo of the Cochiti people, it is part of the Albuquerque Metropolitan Statistical Area. The population was 528 at the 2010 census. Located 22 miles (35 km) southwest of Santa Fe, the community is listed as a historic district on the National Register of Historic Places.

San Ildefonso Pueblo is a census-designated place (CDP) in Santa Fe County, New Mexico, United States, and a federally recognized tribe, established c. 1300 C.E. The Pueblo is self-governing and is part of the Santa Fe, New Mexico Metropolitan Statistical Area. The population was 524 as of the 2010 census, reported by the State of New Mexico as 1,524 in 2012, and there were 628 enrolled tribal members reported as of 2012 according to the Department of the Interior. San Ildefonso Pueblo is a member of the Eight Northern Pueblos, and the pueblo people are from the Tewa ethnic group of Native Americans, who speak the Tewa language.

Maria Montoya Martinez was a Native American artist who created internationally known pottery. Martinez, her husband Julian, and other family members examined traditional Pueblo pottery styles and techniques to create pieces which reflect the Pueblo people's legacy of fine artwork and crafts. The works of Maria Martinez, and especially her black ware pottery, survive in many museums, including the Smithsonian, the Metropolitan Museum of Art, the Denver Art Museum, and more. The Penn Museum in Philadelphia holds eight vessels – three plates and five jars – signed either "Marie" or "Marie & Julian". Maria Martinez was from the San Ildefonso Pueblo, a community located 20 miles northwest of Santa Fe, New Mexico. At an early age, she learned pottery skills from her aunt and recalls this "learning by seeing" starting at age eleven, as she watched her aunt, grandmother, and father's cousin work on their pottery during the 1890s. During this time, Spanish tinware and Anglo enamelware had become readily available in the Southwest, making the creation of traditional cooking and serving pots less necessary. Traditional pottery making techniques were being lost, but Martinez and her family experimented with different techniques and helped preserve the cultural art.

Julián Martínez, also known as Pocano (1879–1943), was a San Ildefonso Pueblo potter, painter, and the patriarch of one of the most important family of Native American ceramic artists in the United States.

This is a chronological list of significant or pivotal moments in the development of Native American art or the visual arts of the Indigenous peoples of the Americas. Earlier dates, especially before the 18th century, are mostly approximate.

Margarete Bagshaw was an American artist known for her paintings and pottery. She was decent of the Tewa people of K'apovi or the Kha'p'oo Owinge, Santa Clara Pueblo, New Mexico.

Martina Vigil Montoya (1856–1916) was a Native American ceramics painter from San Ildefonso Pueblo, New Mexico. She frequently collaborated with her husband and partner Florentino Montoya. They introduced new techniques and materials to other potters. Julian Martinez often copied their designs and in 1895 Maria Martinez called Martina the finest contemporary potter. They moved from San Ildefonso to Cochiti Pueblo, the birthplace of Martina's father, between 1902 and 1905. While the bentonite slip employed in Cochiti pottery gave it a soapy appearance, Southwestern ceramics expert Jonathan Batkin considers the Montoyas' work from this period to be stylistically San Ildefonso. She's known for being the primary instructor of her niece Tonita Peña. 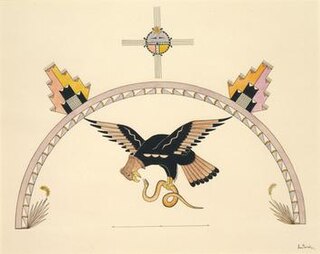 Awa Tsireh, also known as Alfonso Roybal and Cattail Bird, was a San Ildefonso Pueblo painter and artist in several genres including metalwork. He was part of the art movement known as the San Ildefonso Self-Taught Group. His work is held by several museums, including the Smithsonian American Art Museum.

Gerónima Cruz Montoya (Potsunu) was an Ohkay Owingeh Pueblo artist and educator from New Mexico. She taught Native American artists at the Studio at the Santa Fe Indian School.

Joe Hilario Herrera, also known as See Ru, was a Pueblo painter from a mixed Cochiti and San Ildefonso background. He was the son of the artist Tonita Peña and trained at the Santa Fe Indian School.

Tonita is a feminine given name and a surname. Notable people with this name include the following:

Laurencita R. Herrera (1912–1984) was a was a renowned Native American Cochiti Pueblo artist, specializing in traditional Cochiti figurative pottery called storytellers and her pottery vessels. She is of the Herrera family, a renowned family of Pueblo potters in New Mexico, whose work is often found in art collections and in art museums. She was an actively making pottery between the 1930s through the 1970s and is known as one of the, "finest Cochiti potters of that era".

Romando Vigil, also known as Tse Ye Mu was a Native American self-taught painter and a leader in the San Ildefonso school. He briefly worked for Walt Disney Studios as a painter and illustrator in the 1950s.