Tonje Kristiansen (born 29 September 1967) is a retired Norwegian sailor. She was born in Tønsberg. 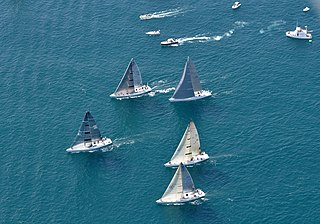 Tønsberg[²tœnsbær(ɡ)](listen) is a city and municipality in Vestfold county, southern Norway, located around 102 kilometres south-southwest of Oslo on the western coast of the Oslofjord near its mouth onto the Skagerrak. The administrative centre of the municipality is the town of Tønsberg. The municipality has a population of 41,239 and covers an area of 107 square kilometres.

Along with Ida Andersen she participated in the 470 class at the 1992 Summer Olympics, where they placed 14th. [1]

Ida Andersen is a Norwegian sailor from Tønsberg, and world champion from 1987.

Ingrid Kristiansen is a Norwegian former athlete. She was one of the best female long distance runners during the 1980s. She is a former world record holder in the 5000 metres, 10,000 metres and the marathon and was a World Champion on the track, roads and cross-country. Kristiansen was the first athlete to win World titles on all three surfaces. At the 1984 Los Angeles Olympics, she finished fourth in the first women's Olympic marathon. At the 1988 Seoul Olympics, she dropped out of the 10,000 metres final while leading. Early in her career, she was also an elite cross country skier, winning several Norwegian titles and a European junior championship.

Norway was represented at the 1992 Summer Olympics in Barcelona by the Norwegian Olympic Committee and Confederation of Sports. 83 competitors, 51 men and 32 women, took part in 64 events in 17 sports.

Elin Kristiansen is a former biathlete from Norway. She won two individual World Championships medals, one in 1988 when she won silver at the 10 km event and a bronze in 1990 from the sprint event. Her best Winter Olympic Games placing came in the 1994 Winter Olympics, when she finished fourth in the relay event, and her best individual placing was ninth, from the individual at the Olympic games 1992 in Albertville.

Zhong Huandi is a retired Chinese long-distance runner who concentrated on the 3000 and 10,000 metres, and later the marathon. She became a four-time Asian champion and two-time World Championships silver medalist. On 8 September 1993, she became the second fastest 10,000 meter runner of all time, only surpassed by Wang Junxia, the winner of that same race by more than half a lap in what remained the world record until the 2016 Olympics. Both runners surpassed the standing world record by Ingrid Kristiansen.

Tonje Sagstuen is a Norwegian team handball player and Olympic medalist. She received silver medals at the 1992 Summer Olympics in Barcelona. Tonje Sagstuen played 217 games for the national team during her career, scoring 593 goals.

Lena Frier Kristiansen is a badminton player from Denmark. In 2001, she won the silver and bronze medals at the European Junior Championships in the mixed team and doubles respectively. Partneres with Kamilla Rytter Juhl, they won the bronze medal the 2006 European Championships in the women's doubles event, and made it to the gold medal in 2008. They also competed at the 2008 Beijing Olympic Games, but was defeated in the first round by the Japanese pair Kumiko Ogura and Reiko Shiota in the rubber games.

Erling Kristiansen was a Norwegian cyclist.

Beate Kristiansen is a Norwegian sailor. She was born in Moss, and has represented Moss Seilforening. She competed at the 2004 Summer Olympics in Athens, where she placed ninth in the Yngling class, together with Karianne Eikeland and Lise Birgitte Fredriksen.

Stig Kristiansen is a Norwegian former cyclist. He competed in the team time trial at the 1992 Summer Olympics.

Agnete Kirk Thinggaard is a Danish Olympic dressage rider. Representing Denmark, she competed at the 2016 Summer Olympics in Rio de Janeiro where she finished 26th in the individual and 6th in the team competition.

Jesper Thusgård Kristiansen is a Danish rower. He competed in the men's eight event at the 1992 Summer Olympics.